Police in China nearly beaten to death in citizen backlash

Several Chinese law enforcement officials were nearly beaten to death in the city of Cangnan after a brutal backlash by local residents. Riots broke out when five officers – known as ‘Chengguan’ – violently assaulted a man who refused to stop taking photos of them.

Several Chinese law enforcement officials were nearly beaten to death in the city of Cangnan after a brutal backlash by local residents. Riots broke out when five officers – known as ‘Chengguan’ – violently assaulted a man who refused to stop taking photos of them.

The man reportedly stopped to photograph the officers while they were having a dispute with a street vendor on Saturday. The ‘Chengguan’ are parallel police units tasked with enforcing urban regulations, though their main duties appear to be dealing with illegal street vendors. The officers instructed the man to delete the photos. According to several sources, Chengguan police began beating him after he refused, in a spectacle that drew a large crowd of onlookers. Photos posted online show a hammer that witnesses claim was used by the Chengguan during the assault.

This photomontage shows how events unfolded. Each photo was uploaded onto Chinese social networking site Weibo.

WARNING: THE FOLLOWING IMAGES ARE GRAPHIC.

The alleged victim of Chengguan brutality lies on the ground. His mobile phone can be seen propped against his left leg.

The hammer that witnesses claim was used by Chengguan against the man shown in the photo above. 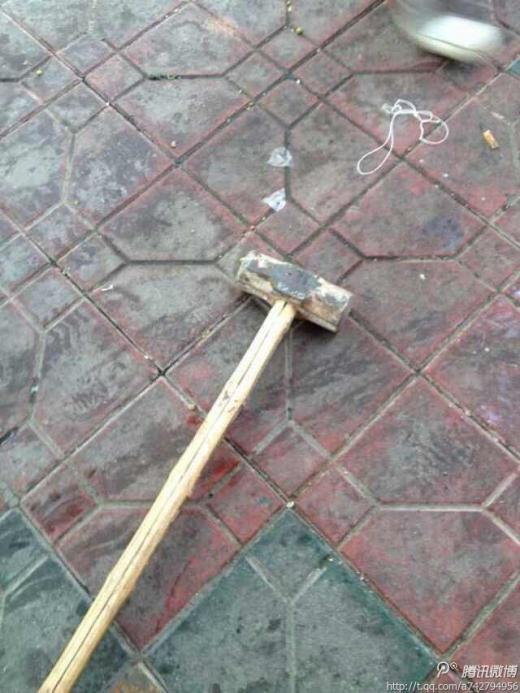 A large crowd quickly gathers after news of the assault spread via instant messaging services. Angry bystanders surround a yellow van that Chengguan police had tried to use to flee the scene.

People attack the yellow van in which Chengguan officers are taking refuge, smashing windows and ripping off the doors. Witnesses say onlookers slashed the van's tyres to prevent it from escaping. 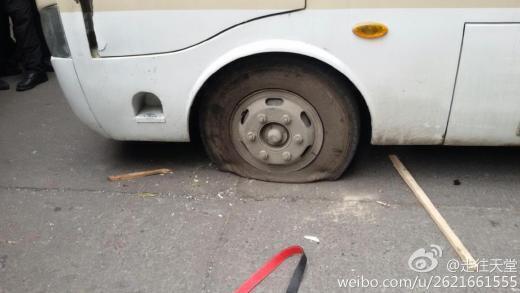 Chengguan police are left bruised and bloodied under a heap of stones and rubble inside the vehicle. They are later rescued by riot police and taken to hospital. Two are reportedly in serious condition.

Outraged and spurred on by rumors that the man had been beaten to death, the crowd cornered the Chengguan to stop them from leaving. Pictures show the officers taking refuge in a nearby van, before residents slash the tyres, smash the windows and attack them with stones. According to the official version of events cited by the state-run China Daily, two officers were left seriously injured. However, several eyewitnesses claim the men were killed.

Grisly photos circulating online show several Chengguan lying bruised and bloodied inside the van amid a heap of stones and rubble. According to Shanghai-based Dongfang Daily, three police vehicles were sent to rescue the officers. More clashes broke out when riot police arrived and fired tear gas in an attempt to disperse the crowd. According to an Observer contacted by FRANCE 24, enraged residents also attacked an ambulance dispatched to rescue the Chengguan officers.

"Everyone said he had been beaten to death by the Chengguan. That enraged the local residents"

FRANCE 24 contacted a resident of Cangnan who prefers to remain anonymous. He witnessed the events first-hand.

I saw on WeChat the photo of a bloodied man lying on the ground [Editor’s note: WeChat is an instant messaging service for mobile phones]. Everyone said he had been beaten to death by the Chengguan. That enraged the local residents. But with nothing except a photo, it was impossible to figure out if it was true. So I went to the scene to see for myself. It was around 10am.

I left around 3pm because I sensed that the situation could get out of control, and also because my eyes were hurting from the tear gas. The official media said that the crowd had been dispersed between 4pm or 5pm by around 100 police reinforcements, but I have difficulty believing it. Videos posted online show that the tear gas had no effect on the crowd. It was only after the arrival of around 50 police vans that the situation calmed down, and the Chengguan were evacuated.

The people’s anger can be explained for several reasons. First of all, there’s the behavior of these thugs when they work. At the market, for example, they don’t hesitate to use force and violence to confiscate the merchandise of local peasants who come to town to sell their products but don’t have the means to rent a spot for a market stall. The Chengguan are generally temporary workers recruited from other provinces. The fact that strangers come here to impose their own laws on us doesn’t go down very well. In Wenzhou [a town situated north of Cangnan, in Zhejiang province], there’s lots of discontent after years of forced evictions. The Chengguan are often implicated in these evictions, so this incident was also an opportunity for people to get revenge.

The Chengguan are notorious in China. According to a report by Human Rights Watch, branches have been set up in more than 650 cities in China. Yet no overarching framework exists to regulate and supervise these parallel police units. As a result, Chengguan have earned a reputation for “brutality and impunity” [Editor's note: in 2009, a guide appeared instructing Chengguan on the arts of ‘beating up’ illegal street traders]. Several victims allege to have bore the brunt of this abuse, including being “punched, kicked” and “thrown from their vehicle into the street”.

A video posted online shows the alleged victim of the attack. Towards the end of the video, a crowd of people can be seen attacking the van in which Chengguan are attempting to escape.

In another video posted online, a large crowd can be seen overturning a police vehicle dispatched to rescue the five officers.