Iraq: your next holiday destination?

The word “Iraq” generally evokes images of al Qaeda, terrorism, sectarian strife, and so on. But what if there was another face of Iraq to explore? Our Observer is trying to prove exactly that. He believes that certain areas of the country that used to be tourist hotspots could relive their glory days.

The word “Iraq” generally evokes images of al Qaeda, terrorism, sectarian strife, and so on. But what if there was another face of Iraq to explore? Our Observer is trying to prove exactly that. He believes that certain areas of the country that used to be tourist hotspots could relive their glory days.

The photos uploaded to the “Tourism in Iraq” Facebook page look like they come from a bygone age; however, most of them were taken between 2012 and today. They show a series of historic Iraqi sites as well as popular festivals, such as Nowruz (Persian New Year) in Iraqi Kurdistan or the Baghdad Carnival. 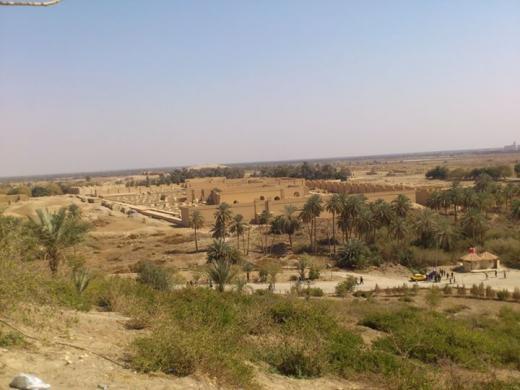 The ruins of ancient Babylon.

Hot air balloons during the International Festival of Babylon.

Iraq used to be a tourist destination. Up until the 1970s, many Westerners used to travel there to participate in archaeological digs. However, most hotels that hosted these travellers have not been renovated since the 1980s.

Among the most famous sites are the ruins of Babylonia, which was once home to one of the world’s seven wonders, the hanging gardens of Babylon; and the ancient city of Ur, where, according to the Bible, Abraham lived.

However, in a country scarred by war, Saddam Hussein’s dictatorship, US occupation, and the current sectarian bloodshed, tourism is now virtually non-existent.

“Iraq is not dead, and though its population has suffered, it continues to live”

Nawar is an Iraqi currently studying tourism at the University of Bucharest in Romania. His thesis focuses on the role of international relations in promoting tourism in Iraq.

It’s when I arrived in Europe that I realized that the current generation of young people — which is to say people my age, my university classmates — only know Iraq from newspaper headlines: bombs, attacks, deaths. So I wanted to show that the country’s reality cannot be reduced to this and that Iraq is also a beautiful country that can be visited. To do this, I launched a website and an English-language Facebook page, with photos and videos to support my claims.

What I first try to tell people is that Iraq is not necessarily dangerous. Most attacks and clashes with armed groups occur in the region in and around Baghdad [the latest attack on April 13 caused 11 deaths] and in the region of Al-Anbar, close to the Syrian border. Iraqi Kurdistan, for instance, is a secure region that Western tourists have visited in recent years. It is accessible via the Erbil airport. Erbil is the regional capital and was designated as the Arabic capital of tourism for 2014.

The problem is that Iraqi institutions are not doing anything to promote a positive image and encourage tourists to return to Iraq — and not just religious tourists, who are motivated by their beliefs and less concerned with danger. For instance, the Facebook page of our Ministry of Tourism is solely in Arabic and only talks about the ministry’s activities! There is not a word about the country’s cultural treasures or about the history of its ancient monuments.

The same goes for the Iraqi travel agencies: a Danish agency contacted me via the Facebook page to organise trips in Iraq and I put them touch with a local agency. However, this agency requested very high fees, which they justified as necessary due to the security situation in Baghdad. They hadn’t even thought of organising the trip in safer regions.

Musicians parade in the street during the Baghdad Carnival.

A visit from a Vatican delegation to the ancient city of Ur in southern Iraq in December 2013 was a great occasion to remind the world of Iraq’s impressive cultural heritage. And they are not the only ones who came to visit: around 500 western tourists toured this area in 2013 without incident.

Through the page “Tourism in Iraq”, we are also trying to show all kinds of events that are being organised in the country, such as the Miss Baghdad competition, the Baghdad Carnival, women’s football tournaments, and so on. Despite the danger, Iraq is not dead, and its population may have suffered, but it continues to live and enjoy life. I would be so happy if, one day, foreign media covered a cultural event or a film being filmed in Iraq, not only deaths and bombs.