A video showing women in uniform being beaten and harassed by Sri Lankan soldiers has been confirmed as authentic by the country's army. According to our local Observer, this is not an isolated incident.

A video showing women in uniform being beaten and harassed by Sri Lankan soldiers has been confirmed as authentic by the country's army. According to our local Observer, this is not an isolated incident.

The five-minute video, uploaded on March 20 by the Sri Lanka Guardian, which is an opposition site censored in Sri Lanka, was filmed on a mobile phone, probably by a soldier. The footage shows eight women being humiliated during military training exercises. Those who were unable to complete push-ups, or who did not crawl quickly enough, were viciously beaten.

WARNING: CERTAIN PORTIONS OF THIS VIDEO MAY SHOCK VIEWERS

The Sri Lankan army officially recognised the authenticity of the video two days after its publication. According to a spokesperson, the video was filmed in October 2012 in the Anuradhapura district in the centre of the country. The instructors allegedly punished these women for “violating military discipline”, but according to the military spokesperson, the methods used were “not in accordance with standard procedures”. The army promised that strict disciplinary action would be taken against the perpetrators.

“If the army admits to the authenticity of this video, it’s merely as a concession toward the international community”

Harshi Perera is a lawyer and a human rights activist. She founded Janasansadaya, an NGO that works toward ending torture in Sri Lanka.

This gratuitous violence against women is intolerable, but sadly this is nothing new. Cases of women being tortured emerge on a regular basis. Sri Lanka is a patriarchal society where domestic violence against women is commonplace. We frequently receive complaints from women beaten by their partners, tortured by the police, or raped in prison. But our organisation had never received any direct complaints regarding violence or torture of women in the army. 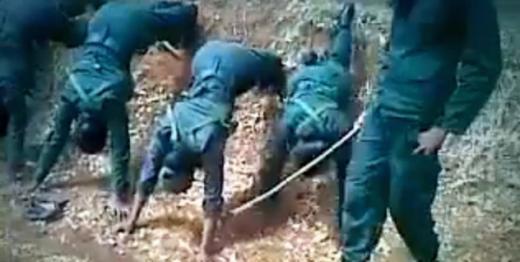 In the above video, women are being forced to do push-ups. Those who are unable to maintain the position are whipped.

It’s excellent news that the army recognises the video’s authenticity. Until now, it had dismissed claims made by political opponents alleging harassment, torture, or execution in military camps. The fact that the victims were women surely played a role, because the government is aware that the international community is sensitive on this issue. And yet, many other videos showing scenes of violence do exist [following the publication of the first video, the Sri Lanka Guardian posted a new video on April 3 showing scenes of brutality against male soldiers. The army did not comment on this second video].

But to be honest, I think this is more a concession on the part of the army. It’s linked to the international context, given the new investigation that the United Nations has launched into alleged crimes committed during the 1983-2009 war. I do not think this video will change much with respect to the current human rights situation in Sri Lanka. The recent government declarations show this clearly: they continue to pressure NGOs against working with the Office of the High Commissioner for Human Rights. 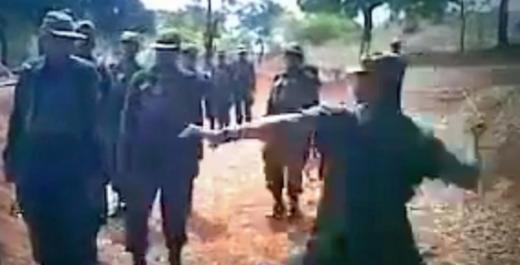 Screen grab from the video above showing female soldiers being beaten.

The United Nations investigation into alleged war crimes targets the Sri Lankan army as well as Tamil rebels, a separatist Hindu organisation that seeks autonomy in eastern and northern Sri Lanka. The government has refused to participate in the investigation and threatened to sue anybody that agrees to provide testimony to the United Nations, because such collaboration would allegedly violate the Sri Lankan constitution and its sovereignty. As a result, the authorities are very tense, and Sri Lankan human rights activists — already subject to frequent harassment and accusations of “terrorism” — are under even greater pressure.

The Sri Lankan war caused the deaths of 22,000 Sri Lankan soldiers, 28,000 Tamil rebels, and 40,000 civilians, according to a United Nations estimate.