A Ugandan whose life was changed by a bicycle is hoping to help bring the same experience to millions of other Ugandans. Chris, a young entrepreneur, is teaching local communities to build bikes from scrap metal, thus improving the lives of people living in isolated communities.

A Ugandan whose life was changed by a bicycle is hoping to help bring the same experience to millions of other Ugandans. Chris, a young entrepreneur, is teaching local communities to build bikes from scrap metal, thus improving the lives of people living in isolated communities.

Eighty seven percent of Uganda’s 36 million people live in rural areas. With health services and schools often located far away from villages, getting around is a major problem.

Most bicycles from CA Bikes are built in the villages themselves. This is a screen capture of a video.

“When I was nine years old, my brother died while I was trying to get him to a hospital”

Chris Ategeka came up with the idea to launch CA Bikes in 2011. An orphan since he was eight years old, he was placed in an orphanage run by an American woman, and at the age of 22, ended up in California studying mechanical engineering at the University of California-Berkeley.

I grew up in a village in the Fort Portal region, in western Uganda. When I was nine years old, my younger brother died while I was trying everything to do possible to take him to the nearest hospital, which was about 10 kilometres away. It was an experience that marked my life, and at that moment, I wondered why we couldn’t get to these sorts of places quickly.

I then returned to the orphanage, where they bought me a bicycle. Hours of walking to school suddenly took just minutes. I therefore had more time to study and my marks improved. My being able to go to the United States to study was definitely thanks to the bike. 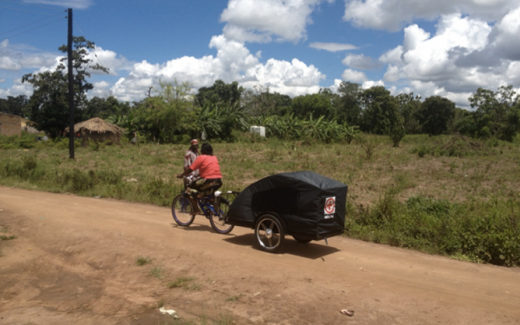 The ambulance bike has become CA Bikes’ most popular product. Sick people lie down in the back and are transported to the nearest hospital.

"Our work doesn’t stop at teaching villagers how to make a bike: we also teach them how to use them, or how to fix them if there is a problem"

After my studies, I decided to come back to Uganda despite the job offers I received in the United States. With a few volunteers, we started trawling through dumps to find scrap metal, tyres and wood to make regular bicycles. We then expanded to make cargo bikes [to transport materials], then bicycle ambulances capable of transporting a person lying down.

We have run workshops to explain how to build bicycles from scratch. I wanted to ensure a community can take ownership of the object from A to Z. Our work doesn’t stop at teaching villagers how to make a bike: we also teach them how to use them, or how to fix them if there is a problem. Some continue making bikes even after we leave. 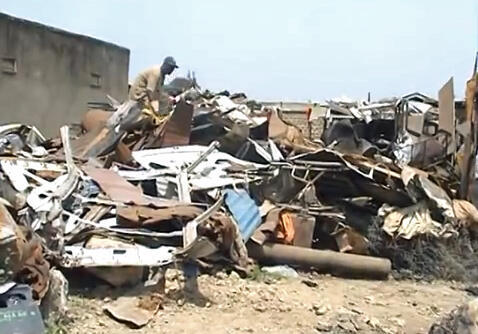 The first CA Bikes bicycles were assembled with scrap material found in dumps.

We now make more solid bikes than ever, thanks to organisations that finance us. But despite the success of our project, we are dependent on the investors’ choice; they are not interested in every type of bicycle in the same way. Many more donations are made to help buy ambulance bikes designed to transport sick and pregnant women [in Uganda, 61 out of every 1,000 babies die during their first year], even though we also want to develop wheelchair bikes for disabled people.

The project, which was only meant to last for a year initially, is now in its second year. In 2013, 150 bikes were distributed in several towns in the north, west and south of Uganda. From making bikes with scrap materials, we’ve now moved on to materials bought from Ugandan artisans. A bike costs on average 1,500 dollars, and is mainly financed by NGOs such as the Red Cross, Samaritan Purse or Mother Health International.

“It takes 30 minutes, instead of two hours, to get to our clinic”

In Uganda, there is only one doctor per 18,000 people. In the southern district of Nakaseke, the Saint Theresa clinic recently received an ambulance bicycle offered by the Change A Life foundation in partnership with CA Bikes. Magawa Scola Lives in a small village nearby and works at the clinic.

Several times, I’ve seen mothers lose their children and villagers die from exhaustion while trying to get to the nearest hospital by foot. When they can, the villagers take a “boda-boda” or local taxis, but they’re not safe because they often drive quickly on roads that are in poor condition [Editor’s Note: every day, nine people die from road accidents in Uganda. The state of roads in the country is regularly denounced by the United Nations]. In addition, these “boda-boda” are not designed to transport sick people or pregnant women. 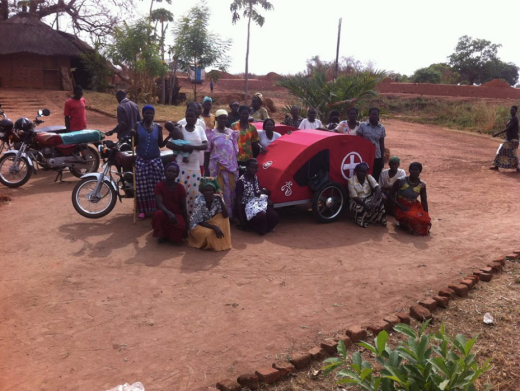 In the region around Atiak, a town in northern Uganda, 27 pregnant women have been transported quickly from villages to the hospital to give birth since the beginning of March.

For now, there are only two bicycle ambulances within a 100-kilometre radius, because they still cost too much. Once they’ve been assembled, we leave it in the hands of a single person, who has been elected by members of the village community to become the bike’s manager. We teach him how to build the bike, and this person becomes a sort of guardian angel responsible for bringing sick people to hospital. It’s a revolution not only in terms of transport; it also strengthens the community.

Some villages in our district are at least two hours’ walk away from our clinic. Now, with these bikes, it takes 30 minutes to get here. An hour and a half’s difference can be enough to save someone’s life. 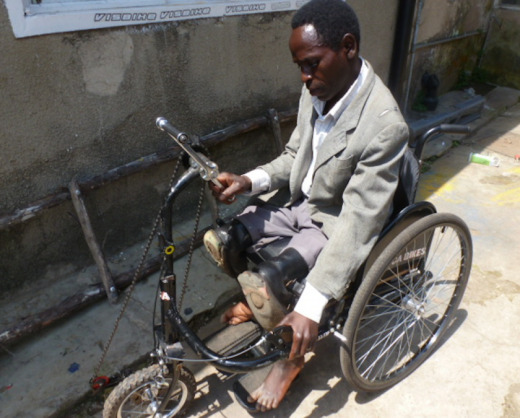 In 2014, CA Bikes hopes to build more wheelchair bikes for disabled people and has set a goal of distributing 250 bikes.

There are more and more innovative projects using recycled materials being tested out on the African continent. Just last March, France 24 Observers introduced readers to a man from Togo who created a 3D printer from electronic waste.

If you would like to tell us about other innovative projects, leave a comment under this article or email us at observers@france24.com!