The fanciful claims of Russian propaganda amid Ukraine's crisis

As the threat of armed conflict hangs over Ukraine, Russian media outlets are firing the opening salvoes of a parallel propaganda war. But several reports have already raised eyebrows. We get to the bottom of three fanciful claims currently making the rounds.

Screen capture of a report aired by Channel One Russia, showing a Polish border crossing for a story that claimed Ukrainians were fleeing to Russia.

As the threat of armed conflict hangs over Ukraine, Russian media outlets are firing the opening salvoes of a parallel propaganda war. But several reports have already raised eyebrows. We get to the bottom of three fanciful claims currently making the rounds.

Over the weekend, Russia’s propaganda machine appeared to have gone into overdrive. As Russian troops and military hardware rolled into the Crimean peninsula, the country’s media were busy whipping up support for an armed incursion. Russian television announced it was cancelling live coverage of Sunday night’s Oscars to concentrate on the crisis unfolding next-door. The situation has led Ukrainian media bosses to publish an open letter in which they urge their Russian counterparts to report with objectivity. In parts of eastern Ukraine and Crimea where most people do not speak Ukrainian, Russian-language media is the principal source of news.

Pictures of the Polish border to illustrate "Ukrainians pouring into Russia"

On Sunday, state news broadcaster Russia Today published an article alleging that a staggering 675,000 people had fled Ukraine's “revolutionary chaos” in the past two months into Russia. The source of the figure appears to be Russia’s border guard service. The same day, Channel One - a state-run network - reported that 140,000 people had fled in the past two weeks. In a report, the channel broadcast these images claiming to show Ukrainians pouring into Russia. But at 0:14; a sign is visible with the name of the crossing – ‘Shegyni-Medyka’ – which is actually situated on Ukraine’s border with Poland. Channel One’s willingness to read from the same script as President Putin could be explained by the man who currently sits on its board of directors: Alexey Gromov. Once Vladimir Putin’s press secretary, Gromov is now his deputy chief of staff.

Video posted to Youtube showing Channel One Russia's report. The channel alleged that 140,000 Ukrainians had poured into Russia in the last two weeks.

The Voice of Russia reported the same figure by publishing an article with a photo of a bus waiting at a border crossing. But far from carrying fleeing Ukrainians out of the country, ‘Zellertal Reisen’ – the insignia of which can be seen on the front of the vehicle – turns out to be a German tour company.

This report, broadcast by Russia 24 [the channel is also known as ‘Vesti’], claims to show images of clashes between pro and anti-Russian supporters in Crimea. From 1:48, text in the upper left-hand corner of the screen indicates that the footage was filmed on February 26 in the city of Simferopol. The pictures appear to show a city plunged into violence by the transfer of power in the capital Kiev. A man interviewed by the reporter at 1:27 even encourages Russian soldiers to "come bring peace". 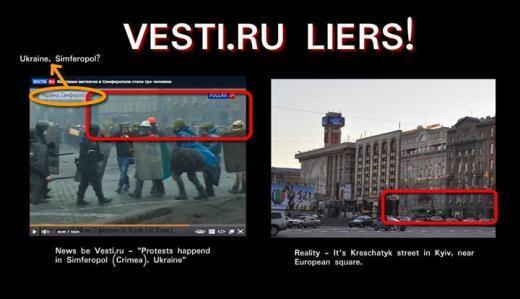 Picture posted to Facebook that attempts to flag up inconsistencies in footage broadcast by Russia 24.

But the pictures don’t show clashes in Simferopol. Rather, they show fighting between opposition protesters and riot police in central Kiev’s Maidan square. In the above photo posted on Facebook, the user juxtaposes a screen capture of the report with an image of the same street in central Kiev – only without flames and riot police. As of yet, there have been no reports of violent clashes between demonstrators and police on such a large scale in Simferopol.

In another video first aired by the channel Rossiya-1, and picked up later by other networks, armed men toting rifles and grenade launchers appear to attack government buildings in Simferopol. The reporter says that there are “provocateurs” in Crimea who want to “destabilise the situation”.

State news channel Russia 24 also broadcast the same footage in this report, in which they refer to the building with the blue façade as the cabinet of ministers building – a key government installation in Simferopol [the building comes into view at 0:22]. After the two-minute mark, viewers are shown footage of the masked men attacking a Russian cameraman. The reporter goes on to say that the assailants couldn’t be captured, because they left “very fast”. The same day this footage was broadcast – Saturday, March 1st – several articles appeared on Russian news websites accusing gunmen “from Kiev” of trying to seize government buildings in Simferopol. The president of the Russian senate – Valentina Matvienko – condemned on Saturday what she called an attempt to take the Crimean Interior Ministry by force.

A closer look at the video may help shine some light on the identity of the alleged assailants. The fighters appear to be armed with GM 94 grenade launchers and AK-100 machine guns: according to a weapons expert contacted by FRANCE 24, these sophisticated weapons are normally used by the Russian military. The yellow bus that the masked men use to make their getaway also seems out of place. That’s because the bus actually belongs to the city’s local zoo, and can be found on the zoo’s official website. Towards the end of the same incident - which was also captured live by French channel BFM TV - the armed men are shown running back onto the same bus. At the one minute mark, the markings of an animal can be seen on the vehicle door that closely resembles those shown on the zoo's website. Also visible on the front of the vehicle is ‘Тайган’ - the name of the zoo - which translates to English as ‘Taigan’.

Yet perhaps not everyone is falling in line behind the Kremlin. On Monday evening, an anchor for Russia Today’s English-language channel appeared to go off script.

Abby Martin ended her broadcast by telling viewers that “military intervention was never the answer” and that coverage of the situation was “rife with disinformation.” The real losers, she said, were the ordinary Ukrainians now caught up in the crisis like “pawns in the middle of a global power chess game.” Russia Today’s editor-in-chief responded by saying the anchor has fallen prey to “American propaganda”.

However, others have pointed the finger at pro-European media outlets in Ukraine [these networks support the idea of Ukraine having closer ties to the European Union]. They’re accused of cherry-picking quotes of prominent figures and taking them out of context to make them appear anti-Russian.