Discarded mainframes, second-hand scanners, and a solid amount of tinkering: These were the ingredients that allowed a Togolese geographer to create the first entirely recycled 3D printer. Recycling these materials, he explains, also helps fight against the worsening electronic waste problem in Togo.

Discarded mainframes, second-hand scanners, and a solid amount of tinkering: These were the ingredients that allowed a Togolese geographer to create the first entirely recycled 3D printer. Recycling these materials, he explains, also helps fight against the worsening electronic waste problem in Togo.

Sales of 3D printers, which can print all kinds of objects using modelling or laser techniques, have boomed in the past year. The market is currently worth 1.5 billion euros and could increase to 6 billion euros by 2020. During this holiday season, several companies are selling 3D printers for individual use atvery low prices. 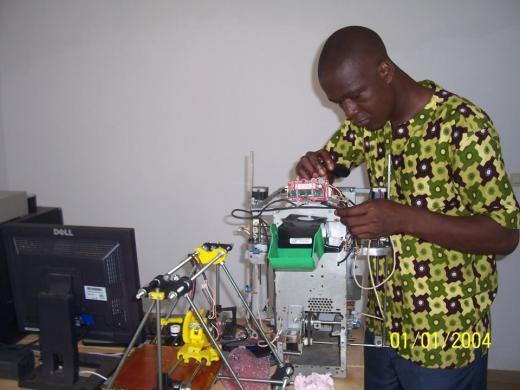 Photo taken in March, two months after Afate Gnikou launched his project. (The photo's time stamp is inaccurate due to a camera programming error!)

Afaté Gnikou, a geographer by training, first saw a “Mendel”—an artisanal self-replicating 3D printer —in August 2012 during a workshop in Lomé.

At first, the machine fascinated me due to all the creative possibilities it offered. But I very quickly realized that this type of machine was not accessible to everyone, because they are built from printed pieces that were also made by 3D printers! Often, they need to be ordered and imported from Europe, which ends up being very expensive. The challenge I set for myself then was to create a 3D printer using only objects that we have access to here in Togo.

Here in the capital Lomé, we have a huge problem, which is also an issue in Ghana and Nigeria: Electronic waste. There are loads of second-hand computers that come from Europe in containers and that end up in our countries. These machines are stacked in unregulated, open landfills. It’s hard to say how many tonnes are in there, but it’s clear that the problem is only getting worse with each passing year.

According to a recent report from Solving the E-waste Problem, 50 million tonnes of discarded electronic and electrical equipment were generated globally in 2012, which averages out to about 7 kg per person. This influx of waste could reach 65 million tonnes in 2017. According to experts, somewhere between 50 to 85 percent of this waste ends up in Nigeria, Ghana, and Togo. Furthermore, by 2017, Africa is expected to generate more e-waste than the European Union.

Gnikou sought to respond to this problem in his own way:

I went hunting for old mainframes, discarded scanners, connection bars, and components in the landfills of Lomé. I basically took anything that could potentially be used to create the chassis and the electronic part of the printer. It took me six months to develop the first prototype. I received support from an incubator, WoeLab that is located in Djidjolé, a lower-income neighbourhood in Lomé. They got unemployed youths to come see me work and to get involved in the project.

Many people told us that what we’re doing is very complicated, that it’s reserved for ‘the elite’. I have no background in computer science; my studies were in literature. Building a model like this is a question of will and creativity. The first object that we printed was one that I had designed from A to Z on 3D modelling software: A pen holder. On it, we had written “right to dream”, our motto from the beginning. 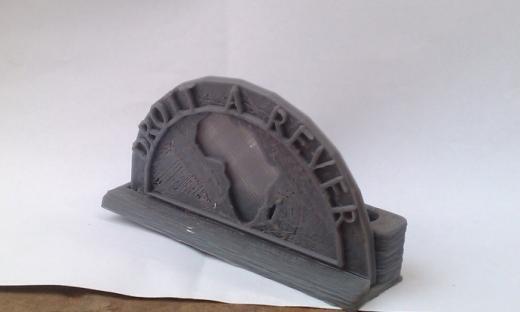 The first object Gnikou created with his printer. The French slogan reads "The right to dream".

“Printing objects is as easy as downloading a PDF!”

We have finished the development phase of the machine thanks to crowdfunding [WoeLab raised 4,316 euros online, more than the 3,500 euros they were hoping to raise during their campaign]. The machine can print plastic objects that range from a few centimetres to a metre in length. We recently sold our first printer during an innovation fair in Abidjan.

Nonetheless, we are still in a period where we need funding to make the machine more financially accessible: Currently, we are selling it at 600 euros so as not to lose money [this is cheaper than the high-end machines sold in Europe, but more expensive than some American machines].

We aim to create a series of such machines, launch training workshops and put partnerships in place

with Internet cafés in order to make their use more democratic. Once you have the machine and know how to use it, all you need to do is download models online, and after that, creating objects is as easy as opening a PDF file! 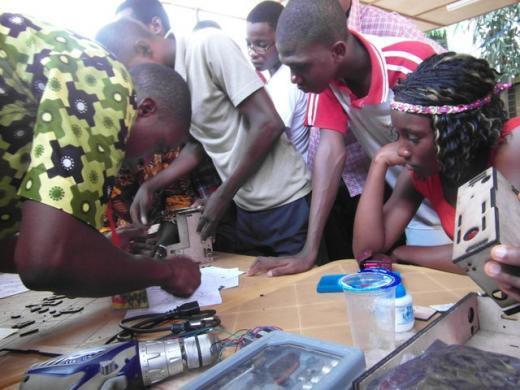 I launched this project by myself from home, for fun. But I only started realising its potential reach when I saw people around me get very excited, and quote Barack Obama’s speech [during his State of the Union speech last February, the US president said that 3D printers would mark the start of a “new industrial revolution”]. If we can help bring this revolution along and not have to wait years before being able to benefit from it, that would be a great source of pride for me.

WoeLab, which supported Afaté in developing his recycled 3D printer, believes that the project could create up to 15,000 jobs. If you are interested in supporting their project, you can contact them at woelabo@gmail.com or via their Facebook page.