Since anti-government protests first broke out in Kiev, social media networks have been awash with rumours that so-called 'agent provocateurs' are provoking disorder in order to tarnish the image of the protest movement. Several amateur videos and photos appear to indicate that these individuals are linked to Ukraine's ruling party.

Since anti-government protests first broke out in Kiev, social media networks have been awash with rumours that so-called 'agent provocateurs' are provoking disorder in order to tarnish the image of the protest movement. Several amateur videos and photos appear to indicate that these individuals could be linked to Ukraine's ruling party.

Despite a parliamentary vote of no-confidence in the government (which ultimately failed to gain the backing of a majority of MPs) and the restarting of negotiations with the European Union, protesters continue to demand the resignation of President Viktor Yanukovych.

The protesters have tried to model themselves on 2004’s largely peaceful Orange Revolution. Despite their efforts, violence has broken out several times over the weekend. On Sunday, clashes between security forces and protesters left dozens of people injured, including around 50 journalists, scores of students, and hundreds of police officers. Some activists accuse individuals close to pro-Russian extreme right-wing parties of orchestrating the violence. Others assert that people are being paid to provoke disorder.

One of the most striking scenes to date at the protest took place Sunday in front of the presidential offices. Protesters used a bulldozer to break through lines formed by the ‘Berkut’, Ukraine’s anti-riot police. Other demonstrators used chains to attack Special Forces. On the margins, suspicious comings and goings seem to take place: on the video below, a man wearing a purple anorak at first appears to attack the anti-riot police. A few minutes later, the same man mingles with the police without attacking them, before casually reemerging from the police ranks to rejoin the protesters, as if nothing had happened.

“Those who I heard were talking Russian amongst themselves”

In the crowd, Oleksandr Aronets, a Ukrainian activist and blogger, filmed protesters who he believed were acting suspiciously.

I saw hooded people, wearing very baggy overalls and clothes, breaking windows for absolutely no reason [numerous Ukrainian Observers have given accounts of men who cover their faces, dress up in sport clothes, and wear neither Ukrainian-colored ribbons nor Euromaiden badges]. Those who I heard were speaking Russian amongst themselves [President Viktor Ianoukovitch is supported by Russia]. Then they started shouting and encouraging other protesters to go fight the Berkut. The members of parliament who led the procession tried to reason with them, but they retorted that non-violence had achieved nothing and that it was time to resort to tougher tactics.

Protesters refer to these kinds of people as the “titushki”, in reference to Vadym Titushko, a man who beat up a Channel 5 journalist last May. He was suspected to have been paid by the government to do that. Since then, many think that those who try to provoke disorder do it because they’re being paid. We don’t know if it’s true, but these people are clearly there to create turmoil and allow the government to take repressive measures, and perhaps even eventually declare a state of emergency.

Other Observers have recounted strange happenings in the streets of Kiev. On Monday morning, one of our Observers filmed the arrival of masses of young men wearing tracksuits in Marinsky park, next to the Ukrainian parliament. They were joined by the security forces who, at one point, appeared to escort them. When the author of the video asks them what they’re doing, some reply “we’re walking”, whilst others give him the finger.

From the third minute onwards, the person filming asks the youths what they're doing in the area. Some respond by giving him the finger, others respond "we're walking".

“They refuse to remove their masks”

Taras Revunets, a specialist in international communication, regularly participates in the protests.

We asked these bizarre individuals to remove their masks, but they refused. Some protesters even tried to put themselves between these masked men and the security forces [some videos show protesters, exacerbated by the violent methods of so-called ‘provocateurs’, laying face down on the ground to entrust themselves to the police].

One video shows this suspicious ‘schizophrenia’ of some protesters. In this video, we see the same protester interviewed by two different Ukrainian TV channels. In the first sequence, the man explains that people who have nothing to do with the protest movement tried to topple the statue of Lenin, seeming to disapprove of the gesture. Yet in the second [which was chronologically filmed before the first] the same man explains that the protesters must lay into the statue; a symbol in his mind of the current government. This reversal indicates to online users that this protester is in reality a ‘titushki’.

“If the Titushki attack, the police will say ‘we don’t know who they are’”

Other unusual events that claim to show ‘titushki’ are currently circulating on Ukrainian social media websites. Bohdan Kutiepo, a journalist for Hromadeske.tv, filmed this unusual exchange.

There was a hooded man and a policeman on the road leading towards the presidential residence. The hooded man headed towards me and asked me for my press card. I said to him in return “Can I see your badge?” and the policeman then approached me to say that this guy wasn’t with the police. He asked me not to pay any attention to him, not to talk to him nor touch him, adding that he was just a “weird guy".

I don’t know who it was. It’s possible that he was a ‘titushki’ but I can’t be certain. On Tuesday, the Internal Troops of Ukraine [a gendarmerie unit attached to the Ukraine Interior Ministry] published a statement on their Facebook page. It asked protesters to “avoid either putting public order at risk or provoking security forces”, without mentioning ‘titushki’. It also claimed to have opened an “investigation in order to identify the authors of the provocations”. There was no mention of any ‘titushki’.

However, without images, there’s no way of proving whether these men are linked to the government. In the past, during the 2004 Orange Revolution, it was alleged and subsequently proven that militant neo-Nazis were being paid and recruited by the Svoboda party to actively participate in the protests. In a similar case in Russia, demonstrators were caught on film being given cash handouts in exchange for turning up to a pro-Putin protest in 2012.

Although there’s no proof, a strong shadow of doubt hangs over whether some of the recent protests were really what they seem. On November 27th, a protest by homosexual activists in Kiev was filmed by a pro-government Ukrainian TV channel that chose to blur the faces of the activists. It was presented as proof that the opposition was trying to impose gay marriage on Ukraine. But other demonstrators who were present say they doubt many of the participants were genuine proponents of gay marriage, going so far as to suggest that they were paid to attend the gathering. 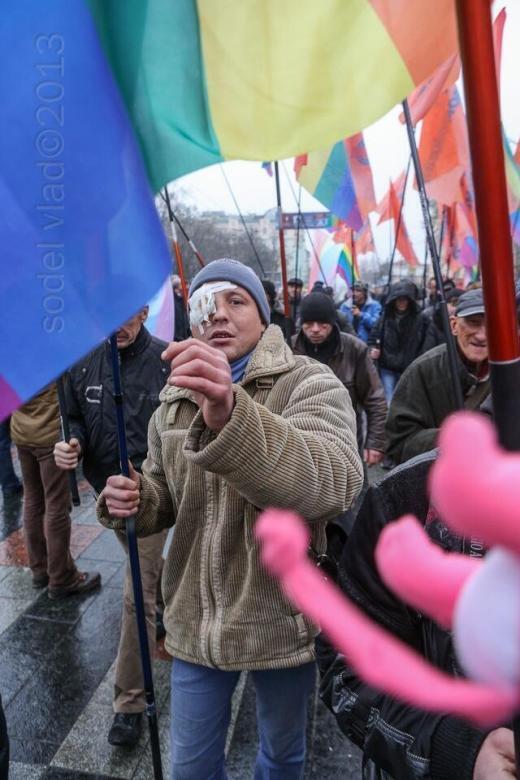 Photo of protesters who participated in a demonstration supposedly in favour of homosexual-rights in Kiev. Opposition activists say they doubt whether these activists were genuine proponents of homosexual rights.

This article was written with Claire Williams (@clairewf24) and Alexandre Capron (@alexcapron), journalists for the FRANCE 24 Observers.