He’s already been arrested five times in the past three months, and hopes to be arrested again. Ido Naveh is a young Israeli man who has made it his goal to attract attention to the African asylum seekers that are currently locked up in a detention centre in the Negev desert, where many of them have been held for years.

Ido Naveh (right), moments before being arrested for protesting in front of a migrant detention centre. Screen grab from this video.

He’s already been arrested five times in the past three months, and hopes to be arrested again. Ido Naveh is a young Israeli man whose aim is to draw attention to the African asylum seekers that are currently locked up in a detention centre in the Negev desert, where many of them have been held for years.

Up until this week, Naveh, occasionally accompanied by a handful of other protesters, had been arrested for protesting outside Saharonim prison. He had asked staff to jail him along with the migrants. On Thursday afternoon, he decided to up his act by protesting in front of the Knesset, Israel’s parliament. The Knesset guards called the police, who briefly detained him.

Ido Naveh posted this photo of the sign he used to protest in front of the Knesset on his Facebook page.

The Sarahonim detention centre, located in the desert three kilometres from the Egyptian border, houses nearly 1,700 African migrants, mostly from Eritrea, who were arrested for entering Israel illegally from the Sinai peninsula. They were locked up without trial, for a period of up to three years, under Israel’s 2012 “Infiltrators Prevention Bill”. However, a recent decision by the nation’s High Court of Justice has determined this to be unconstitutional. The government now has until mid-December to find an alternative; it is working on a plan to move the inmates to a controversial “open” detention centre.

Ido Naveh (far right) and friends in front of the Saharonim detention centre.

Ido Naveh works as a home aid for the elderly. He lives in Jerusalem.

For several years now, I have been bothered by the fact that African migrants who are fleeing from terrible situations in their countries, and who have done nothing wrong, are being locked up. But only a few months ago, after reading books on nonviolent forms of protest – works by Martin Luther King, Jr, Gandhi, Tolstoy – did I decide to take action.

The first time I went to Saharonim, I wanted to scout the place in view of organizing a protest. I took a few photographs, and was immediately detained by the prison’s guards. I cooperated, because I thought, good, I have succeeded in provoking them – even if I didn’t enjoy it, of course. I was taken to a police station, spent 24 hours in detention, and brought in front of a judge, who let me go. I soon went back, and was stopped again. A few others joined me, and we went back to Saharonim every few weeks and asked to be incarcerated there. Of course, the guards refused. We would start slowly walking toward the gates, and get arrested.

Ido Naveh and friends being taken to a police station on October 3. Video courtesy of David Sheen.

“I’m only alive today because a Polish, non-Jewish family hid my grandmother. So what right do I have not to help others in need today?”

To me, what we are doing to these asylum seekers is the most horrifying thing going on right now in Israel. During the Holocaust, it was us, the Jews, that asked for asylum from other countries, and were refused it. Now, we’re doing the same thing. I’m only alive today because a Polish non-Jewish family hid my grandmother and her family. So what right do I have not to help others in need today?

Naveh and friends being taken to a police station, once again, on November 25. Video courtesy of David Sheen.

The Israeli government works hard to influence public opinion on African migrants. Many politicians [including Prime Minister Benjamin Netanyahu] use the term “infiltrator”, and try to paint refugees as a threat. Most people in Israel are falling for this trap. There is a minority of people here in Israel, but still a sizeable group, that care about this issue. The problem is, caring is not enough. We must make sacrifices. My sacrifice is to protest in a nonviolent manner and go to jail, as many times as it is necessary. I hope more people will join me, but I’ll continue either way. 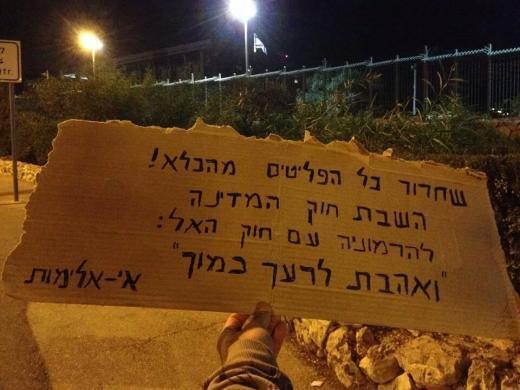 The attached sign says "Release all refugees from jail bring back law and harmony with god's law, love your neighbour as yourself, nonviolence !

The future of the African migrants held at Saharonim prison is highly uncertain. Following the high court’s decision, the authorities are scrambling to finish building an “open” detention centre where the current Saharonim inmates would be relocated. Migrants would be locked up at night, and while they would be free to leave during the day, they would have to report for a roll call three times daily. Seeing as the new centre is being built in the Negev desert, far from any city, activists – and some members of the Knesset – argue that it would in effect be just another prison. The Knesset is also working on a new bill to allow migrants to be detained for up to a year without trial, down from the former three years.

Most African migrants in Israel, however, are not locked up. Some 55,000 African migrants currently live in the country. Many have asked for asylum, but it is very rarely granted. They are not allowed to work, though in practise most of them find illegal jobs in order to survive. In the past year, the authorities have sent several thousand migrants back to countries that they now deem to be safe, including South Sudan and Eritrea. These policies seem to have achieved the desired effect: few African migrants have entered the country illegally this past year.