Torrential rain has been falling across Sudan since late July, causing devastating floods and leaving thousands of people homeless. Thanks to social media, people no longer have to wait for the government to send help. A movement that started on Facebook has connected thousands of Sudanese with people who want to help with those who need it.

Photo taken in Khartoum’s southern suburbs, by members of the Nafir initiative.

Torrential rain has been falling across Sudan since late July, causing devastating floods and leaving thousands of people homeless. Thanks to social media, people no longer have to wait for the government to send help. A movement that started on Facebook has connected thousands of Sudanese with people who want to help with those who need it.

Every year, as autumn approaches, Sudan receives torrential downpours, mostly in the country’s rural areas. This year, however, the capital Khartoum wasn’t spared from the deluge. The rain affected more than 84,000 people there and destroyed 26,000 homes. Across the country, at least 53 people have died and about 200,000 have been affected.

A movement called “Nafir” was started on social networks on the third day of the floods. It now has 5,000 volunteers who have spent the past three weeks providing help to most of the stricken areas.

Photo taken in Khartoum’s southern suburbs by members of the Nafir initiative.

Osman Azhari, a chemistry student, is a volunteer for the Nafir initiative.

Sudanese citizens responded to this catastrophe more quickly than the government [Editor’s note: faced with the scale of the damage, the government’s response has been judged “inadequate”]. We sounded the alarm on social media [the movement has a Facebook page and a Twitter feed where calls for help and donations are relayed]. Many Internet users immediately passed on information on the damage caused by the rain, as well as the need to provide aid.

We chose the name “Nafir”, a typically Sudanese word which describes our tradition of helping others during major events – whether they are happy or not – because we are driven by the spirit of solidarity. We keep this culture alive using modern technology.

A meeting of volunteers before they start field operations.

As soon as word spread about our mobilisation, the Al-Jisr Centre for Social Development, which coordinates civil society volunteer work in Sudan, helped us get off the ground. They let us use a part of their offices in Khartoum so that we could coordinate our efforts and organise donations.

Nafir volunteers at the Al-Jisr office.

Our work involved first going out into the field to examine the damage caused by the rain: the number of people injured, families displaced, and homes destroyed. Volunteer doctors provide first aid to the victims before transferring them to hospitals if necessary. As for people without a roof over their heads, we put them in waterproof tents in places as close as possible to their home but which haven’t been affected by the floods. 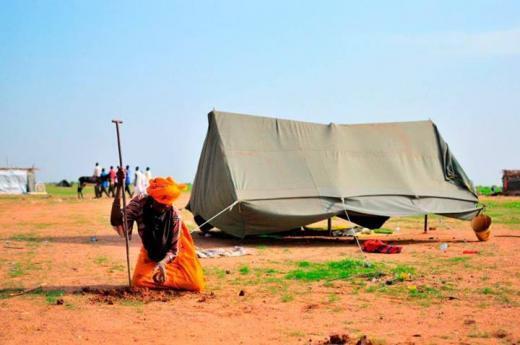 Tents are built by Nafir in dry places as close as possible to damaged homes.

We receive cash and other donations in kind. We mostly distribute food, drinking water, clothes and medicines. These donations come from United Nations agencies as well as NGOs and Sudanese organisations, such as Sadaqat [“charity” in Arabic]. Private organisations have also lent a helping hand by providing us with computers and a wi-fi connection. Even Sudanese people living overseas are giving donations.

Sudanese NGOs regularly work with the needy, but they don’t have the skills required to manage a crisis. They quickly realised that it would be more effective to send the aid via us. This is because people contact us to let us know about the victims, and also because we have enough manpower to distribute the aid. We are like a relay service.

Volunteers leaving for the field.

The rain hasn’t stopped for three weeks, and we are scared of the Nile River flooding as a result. Some of our volunteers are working to put up sandbags around residential areas. Once the rains have stopped, we will focus on rebuilding damaged buildings. Our priority will be hospitals and schools.

Putting up sandbags in a southern suburb of Khartoum.