An amateur video showing police brutality has shocked France, in a scene that takes place in Joué-lès-Tours, a suburb of Tours. The video, filmed by a resident from his balcony, shows two policemen brutally arresting several people. An officer hits, insults and sprays tear gas at one of the women.

An amateur video showing police brutality has shocked France, in a scene that takes place in Joué-lès-Tours, a suburb of Tours. The video, filmed by a resident from his balcony, shows two policemen brutally arresting several people. An officer hits, insults and sprays tear gas at one of the women.

The 8-minute video, posted to YouTube by user “Nasser tkt” on Sunday under the heading “Shame on French police”, had already been viewed nearly 1,000,000 times as of Tuesday afternoon. According to the local newspaper “La Nouvelle République”, the two police officers had spotted a car driving erratically in the early hours of Sunday morning. Seven people were packed into the car.

The driver reportedly refused to undergo a breathalyzer test and struck at the police officers. According to local residents, those arrested were on their way home from a nightclub.

Video published on YouTube Sunday by a witness, who was later interviewed by BFMTV .

“To me, this was a racist act”

Mohammed (not his real name) is a resident of Pierre de Coubertin Street, where the incident took place.

It was just after 7am. My wife and I were woken up by people talking very loudly in the street. We looked out our window and saw a police car as well as several people on the ground. They appeared to be fighting and yelled insults at each other. One man, who was lying on the ground, begged the officers to stop when they tried to handcuff him. 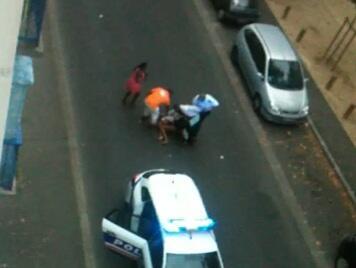 Before the start of the video [which was filmed by a young neighbour who was later interviewed by BFM TV], we saw the woman kick a police officer in the face [the officer also said the woman bit him several times, and tried to grab his portable radio to stop him from calling backup]. He was stunned, but managed to get back up and hit her with his baton, while screaming “Shut your trap”. This is the same police officer who hit the woman later on, as you can see in the video. 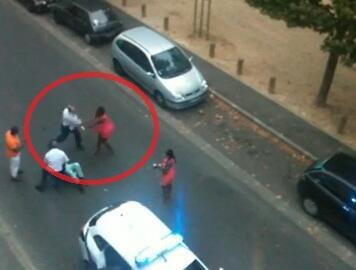 In the video, you can see him go to the trunk of his car and grab a tear gas canister. He sprayed it directly into the woman’s face. Moments later, he sprayed a second woman, also in the face. 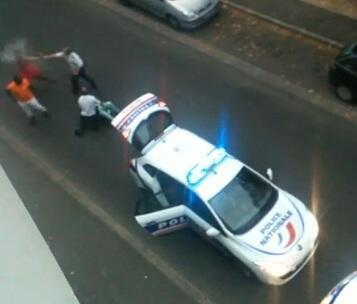 I was shocked to hear the policeman saying “This is bullshit – it’s always the same ones”. They then put handcuffs on the first woman and left her lying in the street for several minutes. When another police car arrived to take those arrested away, he yelled at her again: “Shut your trap, you bitch.” 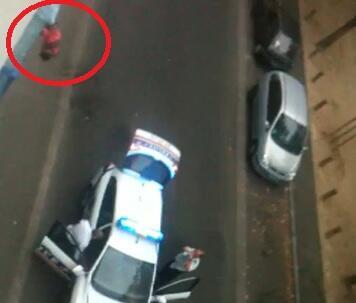 Our street is located several blocks from a housing project, but in general, the neighbourhood is rather calm. I had never seen the police act like this. To me, this was a racist act: I don’t think the policeman would have behaved in this way had he been dealing with someone who was white.

French authorities are currently investigating the incident. The police officers involved have been questioned, and should learn late Tuesday whether charges will be brought against them. French Interior Minister Manuel Valls reacted to the video on RMC Radio, saying: “There is no place for violence in the police.” However, he also condemned the title given to the video on YouTube, “Shame on the French police.”

Meanwhile, the driver has been charged with drunk driving and the first woman with “insulting a police officer.”

“This is an isolated case”

Issouf Elli Moussami is a local councillor in charge of “Quality of Life” in the neighbourhood of La Rabière in Joué-lès-Tours, where the scene was filmed.

I was among the first people to watch this video on Sunday afternoon. Angry residents of Pierre de Courbertin streets had sent it to me. It’s difficult to make out what exactly happened before the start of the video. However, it’s clear in the video that one of the two police officers behaves very violently and completely overreacts, given the nature of the arrest.

La Rabière is a residential neighbourhood, where many immigrants live. It is usually quite calm, and there are no major security problems. The biggest problem in this neighbourhood is the high rate of unemployment, especially among the young.

For several years now, the city has been making efforts to revitalise La Rabière. Its efforts and those of the police to try to improve relations with the youth should not be ruined by one person’s behaviour.

I don’t think this incident should be made into a big deal. In fact, though everyone in the neighbourhood is talking about the video, no cars have been burned, no riots have broken out. This is an isolated case, an arrest that went awry.