Mobile phone footage showing republican guards ordering five women to take off their clothes is causing outrage in Congo-Brazzaville. In a wooded area in the capital city, Brazzaville, the guards laughed at their victims throughout the ordeal. Our Observers say republican guards can operate with impunity.

The spokesman for Nianga Mbouala, the Republican Guard Commandant, told France 24 the footage was being studied for authenticity as the event may have been staged. He confirmed that if the men in the video were indeed republican guards, they would be severely punished.

Mobile phone footage showing republican guards ordering five women to take off their clothes is causing outrage in Congo-Brazzaville. In a wooded area in the capital city, Brazzaville, the guards laughed at their victims throughout the ordeal. Our Observers say republican guards can operate with impunity.

Several interviews carried out by France 24 suggest the incident took place on July 23 in the Patte d’Oie Forest, an overgrown area and red-light district common with prostitutes from the neighbouring Democratic Republic of Congo. The forest is next to the Parliamentary Palace, where the Forbes Economic Forum on the emerging African middle class was taking place at the time. 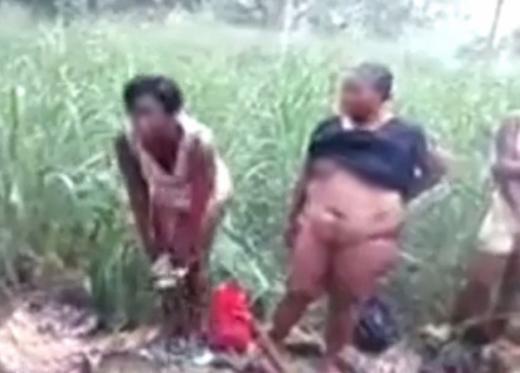 Republican guards force five women in the Patte d'Oie forest in Brazzaville to take off their clothes.

The men are recognisable as members of the Republican Guard because of their traditional purple berets. One of the guards present during the incident filmed the incident using the camera on his mobile phone. Several times, a guard sitting in a car says: “Ma’am, take everything off now, and quickly!”

When the women are completely naked, the men ask: “Look at yourselves, aren’t you ashamed?” They then force them to wade into a thicket of stinging nettles. At the end of the video, the five women were allowed to get dressed and were told never to return to the forest.

The video was posted on YouTube and DailyMotion but it has since been censored by both video-sharing sites. France 24, which obtained the video, chose to show screenshots only.

The Republican Guard ordered the naked women to wade through a thicket of stinging nettles as punishment.

When contacted by France 24, the communications officer for the Congo-Brazzaville presidential office, André Ondélé, claimed that the office was not aware of this incident. France 24 has sent him the video and we will publish his comments if we receive a response. 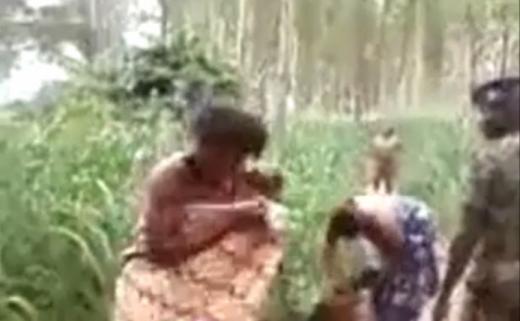 The guards allowed the women to get dressed before ordering them leave.

Elie Smith is a journalist for MNTV, a local television station in Brazzaville.

The republican guards were operating near the forum to “clean up” the area around the Parliamentary Palace. These women, who are very likely prostitutes, were probably mostly from the DRC. Indeed, very often, these “Zaïrians” come to Congo for economic reasons. They are typically extremely poor and make up most of the prostitutes working in Brazzaville. From the footage, it looks like the guards’ objective was to tell them they are not welcome here.

This video takes place within the larger context of xenophobia towards immigrants from the DRC. These so-called “Zaïrian foreigners” are targeted by sweep operations. On July 5th, during celebrations for the 50th anniversary of the city of Oyo in northern Congo-Brazzaville, the police targeted and chased down many DRC citizens. Recently, a video published online showed the police commissioner, Jean-François N’Dengué, inciting the population to “kill Zaïrians” and, more specifically, the Kulunas, a gang from Kinshasa, in Lingala [the local language].

Patrick Eric Mampouya runs a commercial advertising newspaper and is a blogger in Brazzaville.

When I saw the video, my hair stood on end, it’s like someone was doing this to my mother! What I found most shocking was that at the end of the video, you can see the guards filming each other, as if they were proud of what they had just done, and they were commending themselves openly for having forced these women to strip naked. There is no limit to what these guards will do, even going so far as to film themselves committing abuses, because they know they will not be held accountable for anything so long as the video does not go public.

This is not the first time the republican guard has acted in this way; we often hear stories of public humiliations. In 2011, I was very shocked when Paul Marie Mpouélé, an opposition activist, was severely beaten and stripped naked in the streets of Brazzaville because he had tried to organise a peaceful demonstration [Editor’s note: the protest had not been granted police authorisation]. We are so scared of the purple berets that we hide whenever we see them. 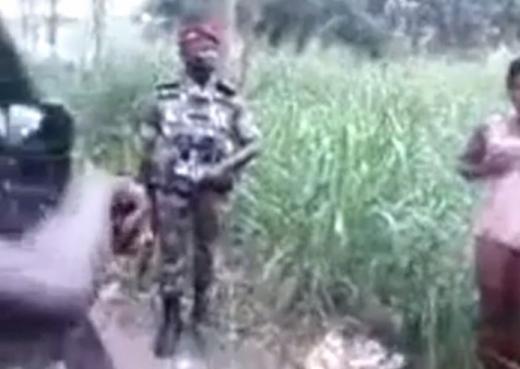 One of the guards, sitting in his car, gives orders to the five women.

The republican guard is the best-trained force in Congo, and so I fail to understand how members of the security elite could act in such a way! It seems like this feeling of impunity has really sunk deep into the norms here. And the failure to sanction the republican guard influences the local police, who feel like they can also do the same kind of thing [Editor’s note: in April, the France 24 Observers published a video showing sexual abuse committed by Brazzaville policemen]. 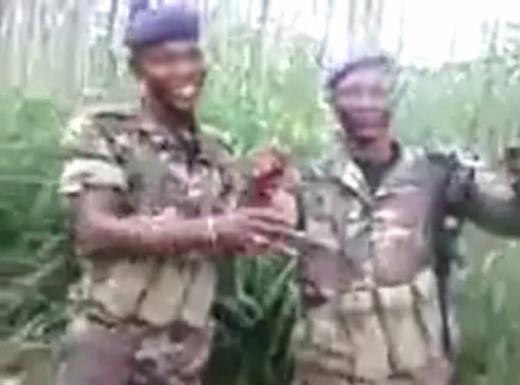 At the end of the video, the soldiers film themselves, showing their pleasure at having reprimanded the women.