Frenchman gives Guinean farmer a hand with his crops, via the web

More than 4,000 kilometres separate Max, a Frenchman from Cavaillon in southeastern France, and Mohamed, a young farmer who lives in Kindia, in the west of Guinea. But thanks to the internet, the pair has launched an ambitious agricultural project in a region where there is little help for farmers.

Mohamed grows vegetables with online advice from a Frenchman who lives in southern France. Photo by Max Grand.

More than 4,000 kilometres separate Max, a Frenchman from Cavaillon in southeastern France, and Mohamed, a young farmer who lives in Kindia, in the west of Guinea. But thanks to the internet, the pair have launched an ambitious agricultural project in a region where there is little help for farmers.

After meeting online in 2010, the Frenchman gave Mohamed advice on creating a vegetable garden. The project soon grew and has just been christened Kindi@venir, with the aim of helping more young farmers in the Kindia region.

Mohamed started growing peppers in 2009 and has increased his production thanks to advice from Max.

Guinea is still a largely rural country, with 80% of the population living off agriculture. However, in 2002 the country imported three-quarters of the rice it consumed. Since then, the government has invested 700 billion Guinean Francs [76 million euros] and dedicated 10% of its budget to the agricultural sector, thus pursuing a policy of self-reliance in order to move from subsistence to commercial farming. 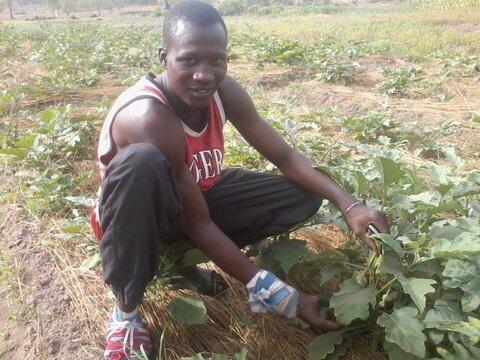 “This work isn’t enough for us to live on, but it’s our passion”

Mohamed Tonyp Camara, also known as Medmo, is 27 years old. He started farming in Kindia in 2009.

I studied industrial chemistry in Conakry, but it’s not easy finding a job in this field. A friend’s parents owned land in Kindia, so my friend and I decided to farm it and to innovate, not just use the land for subsistence farming. When we spoke to people about our project, they said we were wasting our time; that agriculture wasn’t a priority for the government [in 2009], and we would end up going back to the city after a few months.

At the beginning, we grew vegetables, then eggplants and corn. But our production didn’t really take off because we didn’t know basic techniques. I asked for help on the internet and Max replied: he made us planting schedules, sent us seeds, printed us t-shirts and came up with the name and logo for our organisation, Kindi@venir. He has been motivating us for the past three years. He’s my mentor, and without him, I probably would have returned to Conakry. 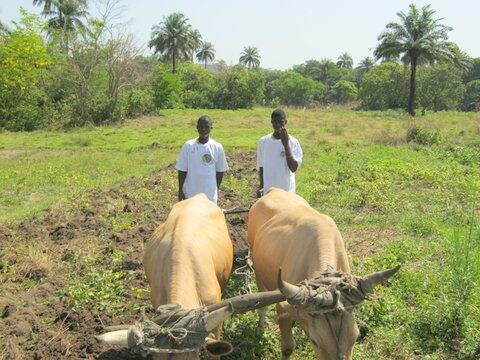 Mohamed and his friends have two cows but only a basic plough.

Today there are around 10 of us participating in this project. We have five hectares of land but we’ve only cleared one hectare for farming. The remaining four hectares need to be cleared, but our only tools are machetes, which makes this difficult. Our main problem is that we have cows, but no real plough. 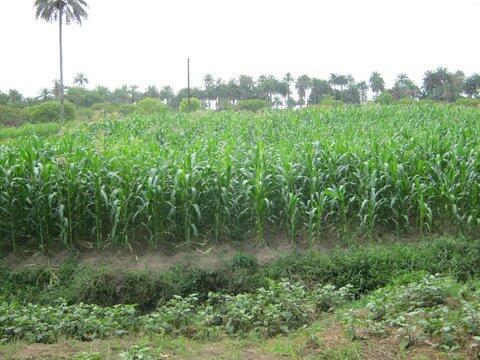 One of Mohamed’s corn fields.

To make matters worse, researchers found a deposit of diamonds on the land where we grow peppers. They took that piece of land from us, and gave us another piece of land of similar size, but it wasn’t suitable for farming. We’re still waiting to be compensated.

The work isn’t enough for us to live on, but it’s our passion. We’re committed to it because it’s still in its early stages. In time, we would like to develop a project called “one pupil, one garden” to create awareness among Guinean children as early as possible and break with our country’s vision of subsistence farming.

“I know nothing about Africa actually; I’ve never been”

Max Grand is 63 years old and lives in Cavaillon, in the French department of Vaucluse.

I am a son of a Vaucluse farmer, born on the same farm as my ancestors. I’ve been communicating with Mohamed at least once a week for the past three years. But I don’t know anything about Africa actually; I’ve never been.

To help him, I try to do the simple things: I have signed up for weather forecasts for Kindia in order to give him advice, and I send him packages with seeds, but they often get lost in the mail. So to make sure he gets them, I rely on friends to take the packages directly to him in Guinea, even though there’s a ban on importing grains. 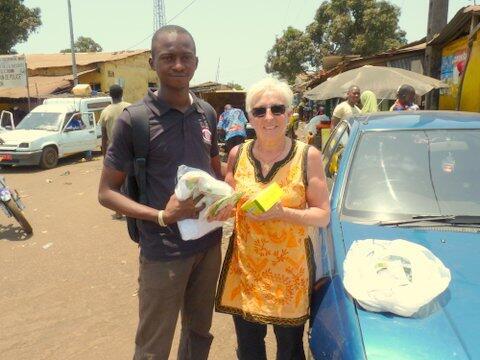 Thanks to one of his acquaintances travelling to Conakry, Max was able to give grains to Mohamed.

When I talk to him, I get the sense that he’s still very influenced by the farming traditions of his country. In Guinea, they don’t really know how to get the most from their lands, which are often left uncultivated for many months of the year. They think of the rainy season like we think of our winter, and therefore don’t try to grow things. I’ve sent him packets of radish that grow in 18 days, even during heavy rain. 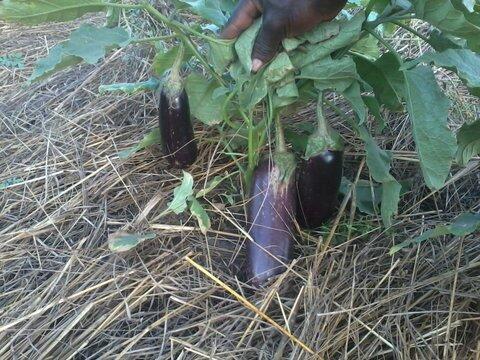 In the photos he sent me, I saw that he’s growing everything on the ground. I advised him to collect reeds to support the tomato plants, but since he has never seen how this is done, it’s hard for him to imagine it.

My aim is to spread the word about this project and to invite former French farmers and gardeners to go to Guinea for a few weeks and explain their techniques. My greatest satisfaction would be for Mohamed to grow melons in his field [melons are key products of Max’s hometown of Cavaillon, and are also grown in Guinea.] 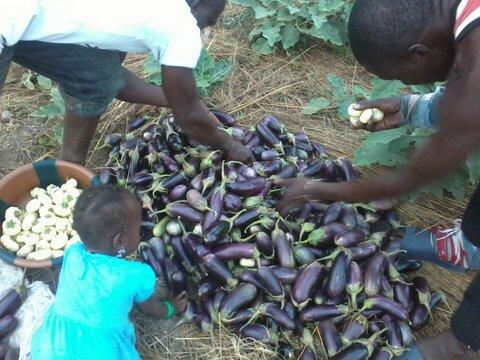