An unusual punishment has shocked many in Iran. On April 15, police paraded a convicted criminal through the northwestern city of Marivan dressed in traditional Kurdish women’s clothing. This has prompted protests in the streets, online, and even in Iran’s parliament.

An unusual punishment has shocked many in Iran. On April 15, police paraded a convicted criminal through the northwestern city of Marivan dressed in traditional Kurdish women’s clothing. This has prompted protests in the streets, online, and even in Iran’s parliament.

The day after the incident, a local feminist organisation, the Marivan Women’s Community, organised a protest to denounce this punishment -- which was handed down by a local court -- as insulting to Kurdish women. About a hundred men and women attended.

On Thursday, the movement spread online, via a Facebook page titled “Being a woman is not humiliating and should not be considered punishment.” By Friday, it had gained over 3,800 fans. Men living both inside Iran and abroad have posted photos of themselves dressed as women to express solidarity with the women of Marivan. A few women, too, have posted photos of themselves -- this time, dressed as men.

Meanwhile, 17 members of Iran’s parliament have signed a letter sent to the Justice Ministry condemning this sentence as “humiliating to Muslim women.” One MP even spoke up to criticize it during a session of parliament.

Hiwa lives in Marivan. He took part in Tuesday’s protest.

Public humiliation has been used as punishment before in other Iranian cities, but not ours. Personally, though this man was a criminal [Editor's Note: he was convicted on charges of battery and disrupting the public order], I am against public humiliation. However, in this case, it’s the technique chosen to do this that upset me the most. This sentence is insulting to half of our population, that is, all Iranian women.

Among those who protested on Tuesday were about a dozen women wearing red dresses, similar to the traditional outfit the guilty man was made to wear. They belonged to the Marivan Women’s Community, which is very active in our region. They fight for women’s rights, for example by protesting against honour killings.

Residents of Marivan do not like being mistreated. We often protest to fight for our rights -- more than in most Iranian cities. I think this is in part thanks to the presence of Marivan University, whose students are quite active. For example, they recently organised demonstrations to ask the government to reopen the border with Iraq, which Marivan is close to, in order to boost our region’s economy.

As far as I can remember, this is the first time in Iran that a man has been sentenced to being dressed in drag. [Editor’s Note: Along with the man who was paraded through Marivan on April 15, two other men received the same sentence, but in their cases, it has not yet been carried out]. I think that the fact that this happened in Marivan is no coincidence, but rather a way to try to scare a population deemed unruly. However, this has completely backfired!

“Being a woman is not something to be ashamed of”

Hajir Sharifi is an Iranian Kurd who lives in Europe. He took part in the Facebook campaign.

The fact that a criminal was sentenced to dress like a Kurdish woman is a double insult. Being a woman is not something to be ashamed of, as the Iranian courts would have you believe. And the fact that the dress chosen was a Kurdish one is also insulting to the Kurdish community, which is already stigmatised in Iran.

I’m glad members of parliament condemned this sentence, but that’s not enough. The judge who made this call should be punished for this. I also think the MP from Marivan should resign as a sign of protest. 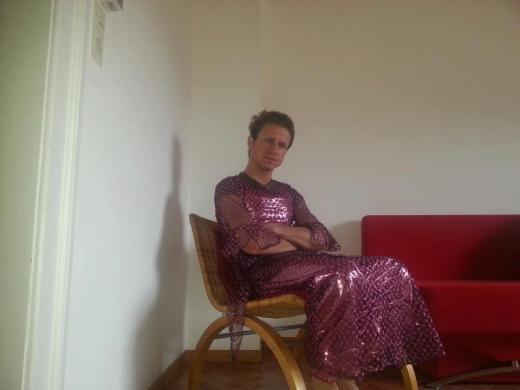 A father poses with his daughter.

This couple exchanged their clothing.