The Islamist rebels who have occupied Gao since April 2012 are being driven out of the city following France’s decision last week to intervene militarily in its former colony. Gao is still not completely liberated, but residents have already begun celebrating in the streets and allowing themselves the small indulgences outlawed by the Islamist extremists’ strict interpretation of Sharia Law.

Photo taken in August 2012 of a crowd gathering in front of the Islamic police headquarters in Gao, Mali

The Islamist rebels who have occupied Gao since April 2012 are being driven out of the city following France’s decision last week to intervene militarily in its former colony. Gao is still not completely liberated, but residents have already begun celebrating in the streets and allowing themselves the small indulgences outlawed by the Islamist extremists’ strict interpretation of Sharia Law.

After having blocked the Islamists’ advance south on Sunday, French forces destroyed various Islamist positions from the air, including arms depots belonging to Ansar Dine and Al-Qaeda in the Islamic Maghreb (AQIM) in the northern Kidal region. Further south in Gao, at least 60 rebels were killed in air bombardments targeting the city’s periphery. Gao had been in the firm grip of the Movement for Unity and Jihad in West Africa (MUJAO).

But the Islamist rebels are not giving up without a fight. They have now taken control of Diabaly, a town in central Mali, 400km from the capital Bamako, with a population of 35,000. 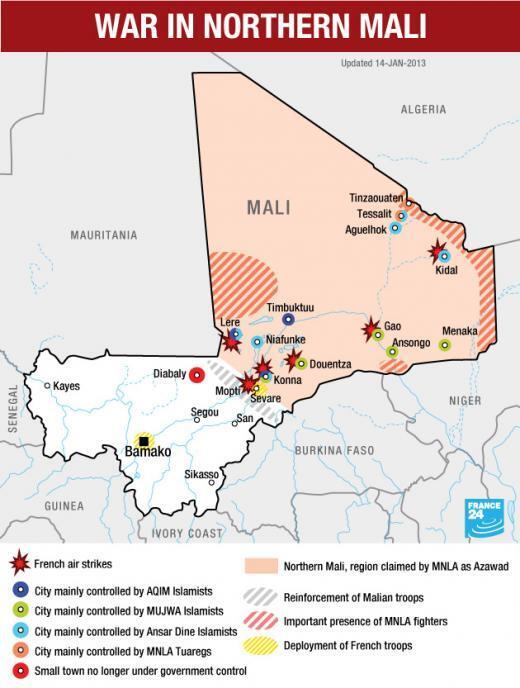 "The armed groups still patrol the streets, but we feel like something has changed"

Amédine is a teacher who lives in Gao.

On Sunday, at about half past midday, we heard lots of aeroplanes flying above our houses and heading north. There were dozens explosions and shots, which lasted half an hour. After that, we didn’t hear anything. I stayed at home until 4 o’clock to be safe, then I went out into the street.

Lots of people in Gao were curious about what had happened. Some of them went up into the north of the city to find out what had been hit. I saw numerous armed Islamist groups patrolling the roads in vehicles. It cannot be said that Gao has been totally liberated, but it seems like half of the jihadists have left the city.

We feel like something has changed since Sunday, people feel freer. The Islamists went through the streets but they weren’t stopping people. They seemed preoccupied and nervous.

Prisoners were set free, and some of them cried ‘Thank you France’, and even, ‘Long live François Hollande!

Cheick Yayaha (not his real name) is a member of a citizens’ resistance group in Gao called ‘Nous, pas bouger’ (‘We’re not moving’).

When the air strikes ended on Sunday, people spontaneously went out into the streets to celebrate. Lots of them were on the edges of the roads, discussing, laughing and mocking the Islamists who were packing up to leave.

It’s as if the panic has changed camps. We started smoking to celebrate. It was the first time in months! [Editor’s note: smoking in public places was forbidden by the Islamist rebels].

We’re hardly seeing any of the Islamists’ 4x4s, whereas before, we saw them all the time. We didn’t see heavy weapons on the vehicles leaving Gao.

“We’re happy and worried at the same time”

The Islamists are still here, but most of them are hiding. It appears there have been a lot of deserters from the Islamist camp, particularly residents who had joined up with them in an opportunistic way.

Some of the Islamists are trying to tell people in the street that the situation is under control and that they are advancing on Bamako [Editor’s note: On Tuesday 15 January, a member of Ansar Dine stated the Islamists’ decision to abandon parts of the north and head south was a strategic decision].

There’s quite a strange feeling amongst Gao’s residents. We’re happy and worried at the same time. Happy to have some freedom back, to live through the ‘liberation of Gao’ – it’s an historic moment. But there’s concern that supplies for residents could become scarce and bandits from the desert could enter the city to loot [Editor’s note: under the Islamists’ strict interpretation of Sharia Law, criminals and bandits were heavily punished].