With violent protests spreading around the world over the video “Innocence of Muslims”, a Muslim organisation in the United Kingdom decided to react in a very different way: by distributing copies of the Koran in English to non-Muslims, with the aim of countering prejudice against Islam.

A volunteer with the organisation "Discover Islam" speaks to a passerby in a London shopping mall.

With violent protests escalating around the world over the video “Innocence of Muslims”, a Muslim organisation in the United Kingdom decided to react in a very different way: by distributing copies of the Koran in English to non-Muslims, with the aim of countering prejudice against Islam.

Photos of the Koran distribution, which have been widely shared on social networks, contrast sharply with those of the violent protests of the past week – they show young Muslim volunteers distributing free Korans in a shopping centre in London.

Behind this initiative is the organisation Discover Islam, whose goal is to educate non-Muslims in the United Kingdom about their faith. It works mainly with learning institutions (schools and universities) and public libraries, giving talks and putting on exhibits that convey a positive image of Islam.

"Our goal is not to convert people, but simply to ask them to read about Islam for themselves"

Naif Sheikh is a volunteer with Discover Islam.

We began distributing literature about Islam in mid-August, not long after the video ‘Innocence of Muslims’ was published on the Internet, and weeks before it caused an uproar around the world. We have distributed tens of thousands of books, including the Koran and other books recounting the life of the Prophet Muhammad and explaining Islamic precepts, all in English.

These distributions take place in London and in its suburbs, as well as in Cambridge and in several other cities in the United Kingdom. We go to public places like shopping malls and libraries. Our goal is not to convert people, but simply to ask them to read about Islam for themselves, instead of listening to everything people say about it. Our goal is to educate. So our discussions with passers-by are relaxed and enjoyable. The people we encounter are usually very receptive, and rarely turn down the books we offer them.

"Keeping silent would have meant we approved of what this video said about Islam, ridiculous as it is"

By encouraging non-Muslims to read about Islam, we’re hoping to dispel certain false ideas, which have unfortunately been further disseminated by this awful video. For example, we hope people will question the idea that Muslims are hostile to other monotheist religions, when actually, Muslims believe in all the prophets. In our religion, Jesus and Moses are prophets just like Muhammad, and thus are respected. [Editor’s Note: The video “Innocence of Muslims” shows Muslims killing Christians in the name of Islam.] The video also shows Muhammad as a man who lusts after many women and even little girls [Editor’s Note: In the video, Muhammad is said to have married 61 women]. But if you read his biography, it’s clear that this is false [he is said to have married 15 women over the course of his life], and that his marriage to the young Aicha [the Prophet’s last wife, whom he married when she was aged 9] was only consumated a few years later.

I don’t think the majority of non-Muslims in the Western world have a negative or false image of Islam, but it was nevertheless important to react and defend our religion. Keeping silent would have meant we approved of what this video said about Islam, ridiculous as it is.

We also do educational work with the United Kingdom’s Muslim community. I understand that Muslims feel hurt by this video, but the reaction that some of them have had over the past week, in different parts of the world, makes no sense. First of all, murder and violence is prohibited by Islam. A true Muslim therefore cannot use violence in the defence of his religion. We have organised conferences at our organisation’s headquarters as well as in London mosques to explain to Muslim people that there are peaceful ways to defend our religion, for example by distributing literature. And just like we ask non-Muslims to read about the Prophet Muhammad’s life, we also ask Muslims to do so and to model their behaviour on his instead of reacting violently to provocation. 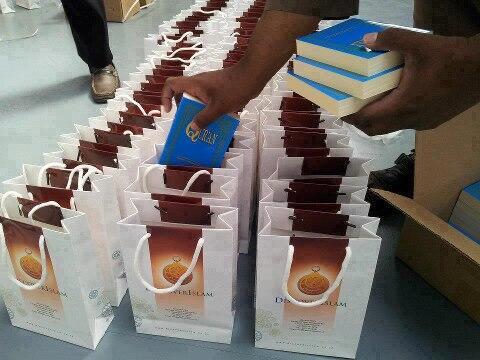 Copies of the Koran being prepared for distribution. 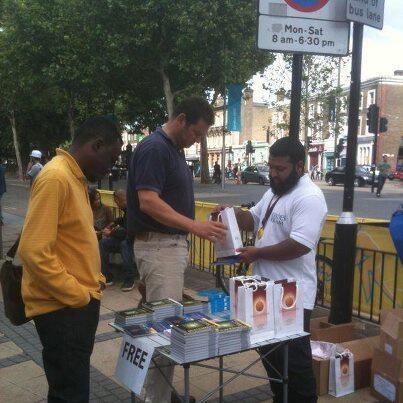 Volunteers distributing copies of the Koran and other books about Islam on a London street corner.