A little over a month after Libya held its first free elections in decades, the government’s grip on power remains tenuous as groups of extremists take advantage of the transition period to carry out attacks. Groups of Salafists have taken to targeting mausoleums and tombs across the country, which, despite being Muslim institutions, they believe to be symbols of heresy.

Screen grab from a video showing the mausoleum in Zliten a day after its destruction.

A little over a month after Libya held its first free elections in decades, the government’s grip on power remains tenuous as groups of extremists take advantage of the transitional period to carry out attacks. Groups of Salafists have taken to targeting mausoleums and tombs across the country, which, despite being Muslim institutions, they believe to be symbols of heresy.

The first attack took place in Zliten, a town just 160 kilometres east of the capital Tripoli, on Friday, August 24. Using bulldozers, explosives and jackhammers, a group of Salafists wrecked a Sufi shrine (Sufism is a mystical branch of Islam). They also destroyed the mosque attached to it and its library, while yelling “Allah Akbar!” (“God is great!”). The following day, Sufi shrines in Tripoli and the northern city of Misrata were also destroyed. These incidents were filmed by the Salafists themselves, who then posted the footage online.

This is not the first time that religious sites have been destroyed in Libya. Just last December, a tomb was bulldozed in Misrata. In videos of this incident, the attackers can be seen holding books and signs with Muammar Gaddafi’s face on them, declaring that the former Libyan leader had financed the mausoleums.

Mohamed al-Magariaf, head of the country’s newly elected National Congress, has condemned the string of shrine attacks, vowing to arrest and severely punish those responsible. Libya’s Interior Minister Fawzi Abdel A'al, however, resigned from office after coming under fire for not having done enough to prevent the attacks in Tripoli.

The incidents have triggered a wave of demonstrations in the capital over the past few days to protest against the vandalism.

Destruction of the Zliten mausoleum on August 24.

The Zliten mausoleum a day after its destruction.

Enas is a blogger and medical student in Tripoli. She is a member of FRANCE 24 and RFI’s Libyablog, a collective of local bloggers. She took part in demonstrations to protest against the attacks targeting the country’s mausoleums.

This is not the first time that extremists attacked the mausoleum in Zliten. Just four months ago there was a group that tried to destroy it, but the local community stood up against them. This time around, they took advantage of the fact that everyone was distracted by a fight that had erupted between two of the town’s families [which claimed two lives on August 23] to attack the site.

“They destroyed texts that were 700 years old”

Not only did they wreck the shrine and vandalise the saint’s tomb, but they also destroyed a number of texts that were 700 years old. The Salafists justified their actions by saying that the Sufi mausoleum was a place of heresy where people go to worship men rather than God [the tombs are those of Muslim scholars who were sainted after their deaths. Some visitors come to seek their blessings and to pray that they will act on their behalf before God, which is prohibited under Islam]. What they don’t realise is that this mausoleum’s mosque is an actual place of prayer, which is why they don’t think twice about destroying it.

Destruction of a mausoleum in Tripoli.

After Zliten’s mausoleum was attacked, Mohamed al-Madkhali, a Saudi extremist imam, fanned the flames by praised the demolition and encouraging other Salafists to do the same. This encouraged extremists to attack mausoleums in Tripoli and Misrata. It could have been even worse. In Tajura, a number of people stepped up to guard the al-Andaloussi shrine and the Mourad Agha mosque.

Libya’s Internet community is divided over the issue. Some people have defended what’s happened, saying that the sites demolished were places of ignorance. Others have spoken out against the violence as the destruction of our country’s national heritage. Some of the latter have gotten together and organised protests, which have been backed by Tripoli’s regional council.

What really shocked me was how equipped the Salafists were when they came to destroy the shrine. They had a bulldozer and used explosives. It speaks to the dangers that still threaten our country, where security is not a given and weapons still circulate freely and with total impunity. I was disappointed that the Interior Minister decided to resign the day after the shrines were destroyed. The current government needs to take responsibility and react firmly to what’s happened. 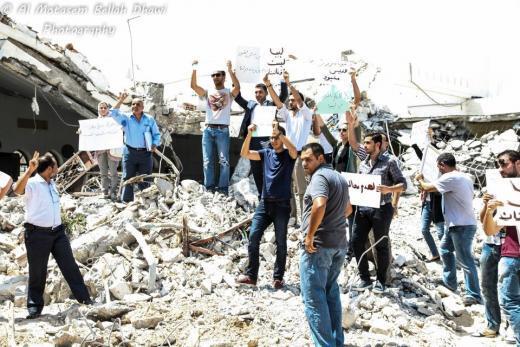