Long known for its religious tolerance, Ethiopia’s reputation now looks to be hanging in the balance as some members of its Muslim community have accused the government of treating them as if they were terrorists, resulting in a wave of mounting protests in the capital Addis Ababa.

Muslims gathered at Anwar mosque in Addis Ababa on July 15. Photo by @DimtsachinYisem published on Facebook.

Long known for its religious tolerance, Ethiopia’s reputation now looks to be hanging in the balance as some members of its Muslim community have accused the government of treating them as if they were terrorists, resulting in a wave of protests in the capital Addis Ababa.

Mass demonstrations against religious discrimination erupted anew on Saturday, after scores of people gathered at Addis Ababa’s Anawar mosque. Clashes reportedly broke out after police attempted to break up the crowd, leading to the arrest of hundreds of protesters.

Last Saturday's protest at the Anawar mosque in Addis Ababa.

Over recent months, members of Ethiopia’s Muslim community have gathered at the capital’s Awoliya mosque every Friday to demand a new “majlis”, or Muslim Council. Many feel as though the current “majlis” is mostly comprised of government-appointed figures who do not represent them.

The demonstrations first turned violent on July 13, when thousands gathered at the Anawar mosque to call for a new “majilis”. Security forces were immediately dispatched to break up the demonstration, which authorities perceived as an act aimed at disrupting an upcoming African Union summit to be held in the capital. Police forced the mosque’s entrance open, before shooting canisters of teargas at the crowd and arresting 72 people.

Protesters at Anwar mosque on July 14.

While the majority of people in Ethiopia are Orthodox Christian, nearly 34 percent of the population is Muslim. Although the country has no official religion and its constitution guarantees religious freedom, there are some Muslims who feel as though their rights have been encroached upon and accuse the government of pushing the ideology of al-Ahbash – a Sunni movement founded in Lebanon during the 20th century that largely condemns Salafism and encourages religious pluralism.

These allegations arise from the belief that Ethiopian authorities have worked over the last several years to make sure that the country’s “majlis” is made up of an al-Ahbash majority. Protesters are calling for a vote to elect new members to the religious body.

Frustration over the issue first emerged in the beginning of the year after a number of teachers at the Awoliya mosque’s school were dismissed, only to be replaced by educators who introduced an al-Ahbash based curriculum. Shortly afterwards the government also shut down the mosque’s university and its Arabic language centre. The government’s actions outraged many in the community, who viewed it as evidence of the state’s interference with religious institutions.

Faced with mounting criticism, Ethiopia’s government has denied allegations that it has supported or backed al-Ahbash figures. It has, however, said that the fight against religious extremism is a priority, and has justified any measures it has taken as necessary to ensure the country’s stability.

Surrounded by predominantly Muslim countries, Ethiopia has always stood as something of bastion against Islamic extremism. However, in the past few years, the Horn of Africa has been no stranger to terrorism. Radical groups such as al-Shabab, which has close ties to al-Qaeda, have taken root in Somalia and Kenya – two nations that share borders with Ethiopia.

Aman, 26, is a businessman in Addis Ababa.

Ever since the beginning of the movement, we’ve organised our protests at mosques. They have never turned violent – all our rallies are peaceful.

The protest movement began with a group of students from Awoliya mosque school, where they were made to learn from an al-Ahbash curriculum. They were quickly supported by a majority of Muslims in Addis Ababa. We’re asking for a new “majlis”. We feel that the present council does not represent all Muslims in Ethiopia because they were not elected to their positions. For us, they will always be government puppets. In other parts of the country, Muslims have even set up their own councils because they refuse to be led by the state’s “majlis”.

We’re not asking that al-Ahbash ideology be banned. Every Muslim has the right to practice their faith in the way they see fit. What we don’t want is that this one belief system be imposed on all of us, because some believe it promotes heretical ideas. 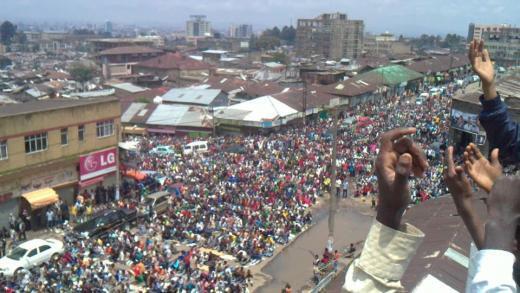 A crowd of protesters outside the Anawar mosque on July 15. Photo by our Observer, Aman.

“Our leaders are watched and harassed by the police”

As our movement grew over time, the government’s attitude toward us also changed. We named leaders to head up negotiations, who were watched and harassed by the police on several occasions. [Last April, an imam from the region of Oromia was detained by the police. According to many in the Muslim community, this was due to his support for the protest movement. The government, meanwhile, accused him of preaching radical Islam.] Young activists have also been detained and physically abused, and a woman from my neighbourhood was beaten by security forces and left for dead in another part of the city.

About a month ago, state television began broadcasting new programmes on peace and tolerance among Ethiopia’s different religious communities. The overall message was that the sense of cohabitation and acceptance that has always characterised Ethiopia is now threatened by extremism in all its forms, in particular by Muslims from the Awoliya mosque. The government now systematically uses the threat of terrorism as a weapon against its opponents. The moment someone doesn’t conform with the government’s political line, they are labeled a terrorist. Fighting for the right to freely practice your religion is not terrorism. We should not be treated like terrorists!

Muslims and Christians in Ethiopia have always lived side by side. Even Christians recognise that all of this is government propaganda. We have always been neighbours, friends and often members of the same family because of inter-religious marriages. I have two aunts and an uncle who are married to Christians. I think the government hopes to ensure its own survival by trying to divide us.