Who is behind the violence in Tunis?

Following clashes between rioters and security forces in Tunis over the past two nights, which have resulted in at least one death, residents of the capital are wondering who is truly behind this violence. While many suspect this is the work of Salafi Islamists, who had already attacked an art gallery on Sunday, others say they saw only young troublemakers in the streets.

The police station in Tunis' La Marsa neighbourhood, after being attacked by rioters.

Following clashes between rioters and security forces in Tunis over the past two nights, which have resulted in at least one death, residents of the capital are wondering who is truly behind this violence. While many suspect this is the work of Salafi Islamists, who had already attacked an art gallery on Sunday, others say they saw only young troublemakers in the streets.

On Monday night, rioters attacked government buildings, including a courthouse and several police stations. The riots broke out simultaneously in both poorer neighbourhoods and rich ones like the suburb of La Marsa, where the gallery attacked by Salafis is located. Abdellia palace was hosting an exhibition called “The Art Spring”, which included works that the extremists viewed as an insult to Islam. The exhibit included a painting of a nude woman and another showing the word “Allah” spelled with a string of ants.

Though the authorities declared a curfew, rioting continued on Tuesday night in the neighbourhood of Intilaka. The Interior Ministry’s spokesman, Khaled Tarrouche, told the French news agency AFP that over 160 people have been arrested for participating in the riots, adding that the assailants were a “mixed group” that included “people from Salafist movements as well as troublemakers.” Many of those arrested, he said, had criminal records. 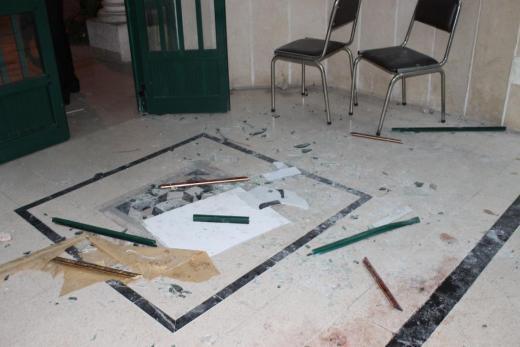 The inside of the police station in La Marsa neighbourhood, following the attack.

“In the neighbourhood of Carthage Byrsa, those who rioted were young troublemakers, not Salafis”

Fatma lives in the neighbourhood of Kram. One of her neighbours, a Salafist, headed to Abdellia palace on Monday night to protest against the “Art Spring” exhibition, which had already been damaged by Salafis the day before.

On his way to the palace, my neighbour and his friends ran into another protest. My neighbour was in constant communication with my brother, who was with me at home, and described what he was seeing. Young troublemakers were attacking the police station in the neighbourhood of Carthage Byrsa. They set it on fire by throwing Molotov cocktails at it. The security forces scared them away by shooting real bullets. My neighbour says Salafis did not partake in this violence.

“At Abdellia palace, bearded men were screaming ‘Allahu Akbar’ and throwing stones at the police”

Erik Churchill, who works as a consultant in Tunis and writes a blog, was near Abdellia palace on Monday night.

I arrived at Abdellia palace around 11:30 p.m. The trouble had already begun. I saw about 40 riot police officers as well as soldiers. Clashes between police and protesters were still going on in the streets near the palace. I can’t say that there were tons of Salafis, but among the protesters, I saw quite a few bearded men screaming “Allahu Akbar” [“God is great”] and throwing stones at the police. [Salafist men generally wear their beards long]. There were also very young guys, teenagers who looked like they should be at home playing video games.

Protesters kept charging the police, who responded by spraying tear gas at them. I did not see the police make excessive use of force. They were greatly outnumbered by the protesters, and seemed to find it difficult to control the situation. The only weapons they had were batons and tear gas canisters.

La Marsa is a wealthy neighbourhood, where many expats live. Since the revolution, the Abdellia palace has hosted numerous exhibitions, often much more daring than this latest one. I don’t understand why this one shocked so many people.

"On social networks, people accused Salafi Islamists, but I saw only teenagers"

Lina ben Mhenni, a Tunisian blogger, was in the La Marsa neighbourhood on Monday night.

At around 10 p.m. my friends and I were driving to a bar in La Marsa. When we arrived in the neighbourhood, we noticed three police vans driving very quickly, with their sirens on. We followed them out of curiosity. They were headed toward Abdellia palace. We saw a great number of security forces standing guard in front of the building. Then we headed to the bar. Soon, however, police came in and asked us to leave the bar immediately, telling us that Salafis were planning to attack the bar and that there had been guns fired nearby. So we headed back to Abdellia palace. There were policemen everywhere, and lots of broken glass and stones on the sidewalk. From afar, I saw policemen throwing things in the air, but I didn’t see anyone in front of them. We stopped the car to try to find out more, but policemen insulted us and told us to leave. One of my friends asked, “Where are the Salafis?” to which a policemen replied by hitting him in the arm. I put my foot on the pedal and we drove off, but not before my car got hit by several stones.

We didn’t see anyone that looked like Salafis – the protesters looked more like young teenagers, just troublemakers. At home, I saw that lots of people were accusing the Salafis on social networks. I wanted to be sure, so I drove back to La Marsa. It was much quieter. Soldiers were patrolling around the palace. A police officer explained to me that the men who had attacked the palace on Sunday were indeed Salafis, but that those who attacked in on Monday were just young troublemakers.

I have asked around, but so far have found no trace of the presence of Salafis during Monday’s rioting, whether it’s photos or videos. I ask that those who accuse them send me their evidence. 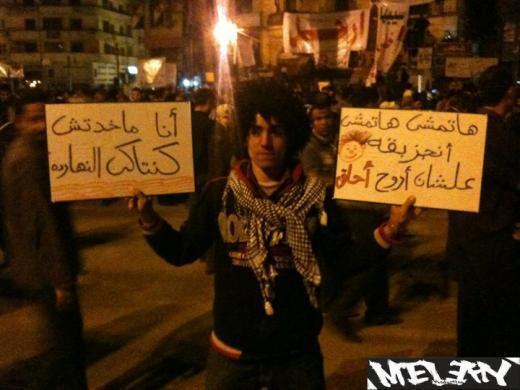 Traces of gasoline in the La Marsa police station. This photo was taken by Emine M'tiraoui and published on Lina Ben M'henni's blog. 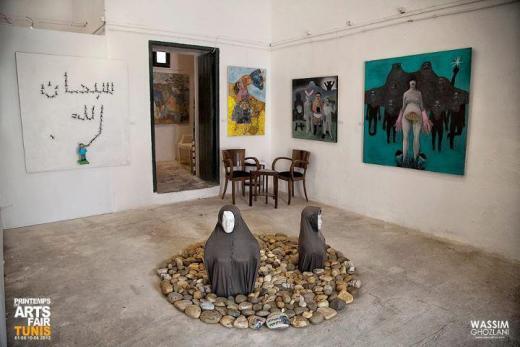 A few of the pieces of art on display at Abdellia palace. On the left, a painting in which ants crawl out of a child's backpack and spell the words "God is great." 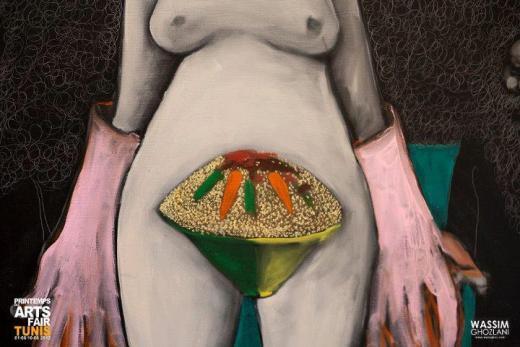 Another painting on display at Abdellia palace. These photos were taken by photographer  Wassim Ghozlani and published on Facebook.