Many Libyans fled to Tunisia when the fighting in their country was at its worst. Now, a month and a half after Muammar Gaddafi’s death, relations between Libyans and Tunisians are far from easy.

Screen grab from a video of an anti-Libyan protest held Saturday in front of a hotel in central Tunis.

Many Libyans fled to Tunisia when the fighting in their country was at its worst. Now, a month and a half after Muammar Gaddafi’s death, relations between Libyans and Tunisians are far from easy.

On Saturday, in the heart the Tunisian capital of Tunis, an angry crowd gathered in front on one of the city’s biggest hotels, shouting anti-Libyan slogans. Demonstrators shouted “Go away, you rotten lot!”, “Rats, you’re rats!” Their insults echoed those of Gaddafi, who often called Libyan rebels “rats” while he was still alive.

At the root of the protesters’ anger was the death of a 20-year-old-woman Saturday. For them, there was no doubt that it was a Libyan national who pushed her from the 10th floor of the hotel’s terrace. An investigation to establish whether the woman’s death was murder, suicide or an accident is still ongoing.

According to the Tunisian Minister of the Interior, more than 70,000 Libyans sought refuge in Tunisia over the summer, following the violence that shook their country.

Tunis was repeatedly the scene of clashes between supporters of Gaddafi and those who fought for his downfall, as members of both groups took shelter in the city. Since the fall of Tripoli, pro-Gaddafi supporters have maintained a low profile. But now, tension is mounting between Tunisians and Libyans from both sides.

Protesters in front of the International hotel on Habib-Bourguiba Avenue in Tunis on December 3.

“Tunisians supported Libyans when their country was at war, but they don’t see any reason to continue supporting them now”

Badiâa Boulila is a Tunisian student living in Ennasr, a neighbourhood of Tunis where many Libyans are now living.

We don’t know the exact circumstances of the young woman's death, but it’s as though people had been ready to protest against Libyans, and were waiting for the first opportunity to do so. Also, the fact that she died right in the heart of the city, along the main street, helped draw a crowd.

Tensions between Tunisians and Libyans aren’t new. Recently a number of incidents have marred relations. For example last summer, a young prostitute was pushed from the third floor of a building by two Libyans. And three weeks ago, Tunisians supporting the Syrian regime went to protest outside the Arab League office in Tunis, to denounce sanctions being imposed on Syria. Some demonstrators were attacked by Libyans, who disapproved of their support for Syria.

Clashes between Libyans and Tunisians in front of the Arab League's office in Tunis.

Some Tunisians believe that Libyans have provoked trouble, in particular pro-Gaddafi Libyans who have come to live in residential parts of Tunis, like my neighbourhood. During the conflict, they didn’t hide their support for Gaddafi. They were easily spotted thanks to the license plates on their cars, because those of rebel sympathisers showed the new Libyan flag. Some were very arrogant and would harass girls in the street.

But for some time now, the situation’s become more serious. Over the last few weeks armed Libyans have been arrested in the south of Tunisia. On the border between Tunisia and Libya, border guards have been attacked several times by armed Libyans who refused to stop at check point [the latest such incidence took place Saturday]. The Libyan authorities are aware of what’s happened and have promised to act accordingly.

Tunisians supported Libyans when their country was at war, but they don’t see any point in doing that anymore, especially now that some Libyans are associated with causing problems – even if it’s only a small minority."

Silham S. lives in Sousse, a tourist town 140 kilometres south of Tunis. Large numbers of Libyan refugees descended on the town when fighting was as its worst. Silham went to Ras Ajdir to help refugees who were fleeing Libya.

In my opinion, anti-Libyan sentiment isn’t felt all over Tunisia. When I was in Ras Ajdir [on the border between Tunisia and Libya], I helped refugees originally from Sub-Saharan Africa. They worked in Libya but had to flee during the violence. There weren’t many Libyans in the camps because they were welcomed into the homes of Tunisian families. I didn’t hear any xenophobic comments in Sousse, where I live.

It’s true, however, that the arrival of Libyans has pushed up the price of living in Sousse. For example, rents have increased. I’m currently in the process of moving and I had trouble finding a place to live, because landlords prefer to rent to Libyans, week by week, to get more money. On top of that, in places where prostitution was known to take place, we noticed prostitutes would come out in the evenings in full sight of everyone, while before the Libyans’ arrival, they would be more discreet.

Even so, we have to look at the positive sides as well. The presence of Libyans in Tunisia has given rise to a real ‘war marketing’ business. They are fond of buying the new Libyan flag or license plates with the new colours of Libya. There are also a lot Tunisian handicrafts painted in the colours of Libya. This has helped boost business - even tourists buy them!

Most Tunisians believe the situation’s only temporary and that Libyans will eventually return home. You have to keep things in perspective. On the radio there’s lots of talk about new job opportunities in Libya, as soon as things calm down. Considering the rate of unemployment here, perhaps Tunisians will end up living in Libya.” 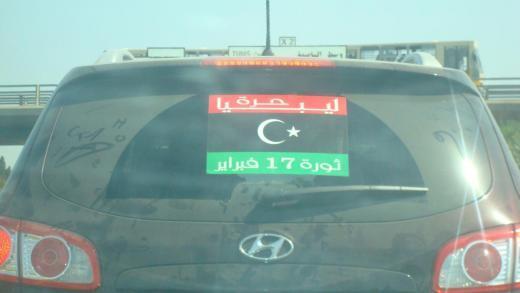 A sticker representing the Libyan flag with the slogan "Free Libya; Revolution of February 17"