UK students: 'We’re being priced out of education'

Thousands of students from across Britain marched through the streets of London Wednesday to protest the government’s overhaul of the higher education system.

Thousands of students from across Britain marched through the streets of London Wednesday to protest the government’s overhaul of the higher education system.

Still angry over stark fee hikes, which sparked violent protests last year, students are now up in arms against a new government proposition that would open up the higher education sector to more private investment. Many students and educators argue this would amount to privatising universities.

Worried about a repeat of last year’s violence, police numbers were doubled in London Wednesday. They warned protesters that they would use rubber bullets, if need be, which angered many students.

"We fear we’re going to lose not only quality of education, but also access"

Alex Peters-Day is an anthropology student at the London School of Economics. She serves as the general secretary for LSE’s Students’ Union.

We’re protesting the government’s plan to allow universities to become privatised. The problem with having education become private is that the incentive isn’t to provide better education – it’s to make profits. So if this happens, we fear we’re going to lose not only quality, but also access, because fees will continue to rise. And we have already seen a drop in students applying to universities since the government decided to raise fees last year.

The school I attend, the London School of Economics, cost 3,000 pounds [about 3,500 euros] per year when I started; now, starting in 2012, it will cost 8,500 pounds per year [about 10,000 euros.]. These fee hikes are quite simply pricing students out of education. They are only applied to students who enrolled in university after the government decided to raise fees, so I am lucky; if it had cost this much when I enrolled, I don’t think I would have gone to university.

University fees are currently capped at 9,000 pounds [about 10,500 euros] per year; however, if universities become privatised they wouldn't be subjected to this cap, and we’re worried they could charge much, much more. We're being priced out an education.

Sadly, because of the way in which the authorities treat protesters, many students are now scared of becoming activists. I myself was arrested during protests against higher fees last year; I was falsely accused of criminal damage against a police vehicle. The police confiscated my laptop and phone for three months; they dropped the charges shortly before I was due to appear in court. This happened to many other students I know, too.

These past few days, the police sent warning letters to students who were charged last time to try to discourage them from protesting again. Though I was innocent, I received this letter too. It’s just awful, because this means they’ve kept my details and put me on some sort of list of people they are targeting – it’s an abuse of privacy. They’re clearly trying to intimidate us from exercising our right to protest. 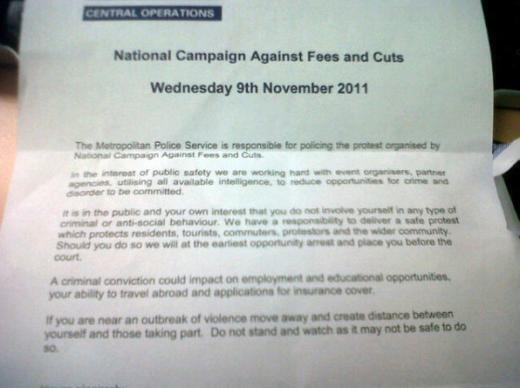 This letter was sent from the Metropolitan police to Alex Peters-Day and many other students. It states: "It is in the public and your own interest that you do not involve yourself in any type of criminal or anti-social behaviour. ... Should you do so we will at the earliest opportunity arrest and place you before the court."

Paul Wynter is an arts trader and a father of three.

The government think it’s okay to load my kids with mountains of debt. I’m protesting to tell them it’s not. My son, who is 19, is already in university; my daughters, who are 17 and 15, will want to attend university, too. Between the three of them, they’ll be loaded with 150,000 pounds [about 175,000 euros] of debt over six years. And if universities become privatised, it could be even more. I’ll help as much as I can, but they’ll still have to take out huge loans.

I see many young people around me have been put off even going to university. My daughters still want to go, but they’re actually thinking of moving abroad for their studies. In countries like France or the Netherlands, it will be much cheaper for them to pursue higher education.

The government should not be charging for education, period. They’re burdening our children who are already having a difficult time finding any jobs when they leave university.