Documents obtained by FRANCE 24 appear to confirm long-held suspicions that former Tunisian leader Zine al-Abidine Ben Ali's political party was rife with corruption and other malpractices. These documents clearly illustrate that the once omnipotent ruling party, the Constitutional Democratic Rally (RCD), regularly engaged in electoral fraud and embezzlement among other illegal activities.

Documents obtained by FRANCE 24 appear to confirm long-held suspicions that former Tunisian leader Zine al-Abidine Ben Ali's political party was rife with corruption and other malpractices. These documents clearly illustrate that the once omnipotent ruling party, the Constitutional Democratic Rally (RCD), regularly engaged in electoral fraud and embezzlement among other illegal activities.

Last June, the FRANCE 24 Observers website published an article on the “mysterious documents of Botzaris Street”  (in French), referring to the street where the former headquarters of the RCD in Paris were located. The article explained how after the RCD's fall from power earlier this year Tunisian migrants squatting the building found what appeared to be compromising documents that had been left behind. However, very little information leaked out at the time, prompting wild rumours about what these documents might contain. We have now obtained exclusive access to the documents, which illustrate the mechanisms that helped keep Ben Ali’s party in power until the revolution sounded its death knell in January.

These documents were found by a lawyer, Soumaya Taboubi, who was able to get her hands on them before the RCD headquarters were closed down by the French authorities, as requested by the Tunisian embassy.

Tunisian activists have created an organisation called “Botzaris Truth and Justice” to investigate the contents of these documents. The organisation’s secretary general Rahim Ouahrani granted FRANCE 24 access to them. The documents, which include reports, email exchanges, receipts, and lists of people who worked for the party, cover RCD activities in Paris from the 1990s up to 2006. There are few documents after 2006; according to a source who worked in the RCD’s Parisian headquarters, its last secretary general, Hédi Limam, had most documents concerning his time in office destroyed.

The Constitutional Democratic Rally was founded by Ben Ali in 1988. The hegemonic party was dissolved by a court order on March 28, after the Tunisian revolution.

The RCD counted the ballots of Tunisians voting in France

Ben Ali’s party, throughout its existence, did astonishingly well at the ballot booths. For example, Ben Ali garnered 89.62 percent of votes in the 2009 presidential election. Human rights groups repeatedly denounced these elections as fraudulent.

The Botzaris Street documents prove that ballots cast by Tunisians in France were counted by the RCD party itself, not by the Tunisian embassy as was required by law.

Reports signed by the secretary general of a branch of the RCD in the French city of Nantes detail the number of registered voters, as well as the names of the people who helped count votes and the final results. These reports from 2002, when Ben Ali’s government organised a referendum to modify the constitution to allow him to run again in 2009, show that the RCD organised the voting process for Tunisians in France from start to finish. 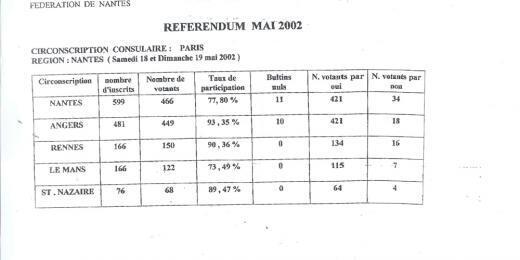 This spreadsheet shows a tally of ballots cast by Tunisian voters living in France during the constitutional referendum of May 2002.

The RCD also handpicked the observers tasked with ensuring elections took place according to the law. One document shows that these observers were actually tasked with identifying and reporting Tunisians who did not vote for Ben Ali. Before the revolution, such voters were easy to spot, since ballots had different colours depending on the party one chose, and the envelopes used were sufficiently transparent to see these colours. In a report dated 23 October 2004, an observer wrote: “Here are the names and addresses of the people that I saw voted for the ‘blue card’ and the ‘gold card’” (blue was the colour of Tunisia’s former communist party, while gold was the colour of the social-liberal party; the RCD’s colour was red.) 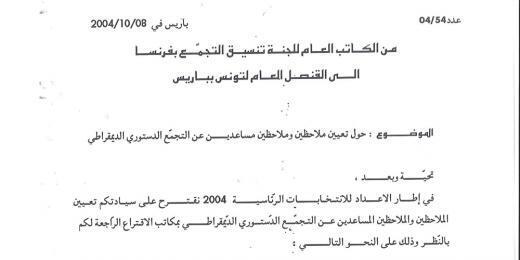 This letter, written by the head of the RCD in Paris, draws a list of observers for the 2004 presidential election.

Comments on the 2004 presidential election, written by an observer selected by the RDC.

The Botzaris Street documents reveal that the RCD’s operating budget for its Paris headquarters was funded in part with Tunisian state funds. This money notably came from the Agency for Tunisians Abroad (an agency of the Ministry for Social Affairs). But other ministries, including the Ministry of Culture and the Ministry of Religious Affairs, also contributed to other projects. A report from the RCD in Paris dated 6 December 2005 shows that the Agency for Tunisians Abroad contributed 276,073.62 euros, and that its contribution was due to go up by about 80,000 euros the following year because of the appreciation of the euro.

Part of a report by the RCD's central committee detailing the party's revenue, including contributions from the Agency of Tunisians Abroad.

The documents also revealed that the RCD asked Tunisian state companies working in France to pay for the salaries of certain party collaborators. In emails, the RCD head in Paris explicitly asked the party’s main headquarters in Tunis to back his demand for “state establishments” (such as Tunisair airlines, the Tunisian Navigation Company and the Office of Tourism) to pay the salaries of several of his “public servants and employees” in France. This was not only to help them financially, but also to give these employees “coverage” so that they could easily renew their papers in France.

Excerpt from an email written by Hédi Slim, the head of the RCD Paris, asking state companies to pay salaries to "public servants and employees" of the party.

An RCD supporter placed in a “human rights” organisation

It was no secret in Tunisia that Ben Ali’s government placed its partisans in key posts in international organisations. However the Botzaris Street archives reveal particularly striking examples of suspect nominations. For example, the secretary of the African League of Human Rights and Peoples, Béchir Khalfallah, was clearly presented in a report by the RCD secretary general dated 21 June 2005 as a party supporter who took part in “all activities” and even represented the “pseudo-opposition” (an opposition manipulated by the regime) during conventions held by international organisations. Bank transfer receipts show that Khalfallah received money from the RCD. It is also worth noting that, according to a Tunisia expert at Amnesty International, the African League of Human Rights and Peoples was “especially created” by African state heads to “serve as a cover for their regimes’ embezzlement of funds”. During Khallafah’s time as president of the organisation, it awarded a human rights prize to Ben Ali. (FRANCE 24 contacted Khalfallah, who confirmed he was an RCD member, but said he had criticised the party from the inside).

Report on Béchir Khalfallah written by the RCD's secretary general.

The “Botzarileaks” documents show a clear conflict of interest. Slim, the RCD’s secretary general in Paris, also enjoyed diplomatic status as a cultural attaché of the Tunisian embassy in France. A photocopy of Slim’s diplomatic card shows that he owned a diplomatic passport. 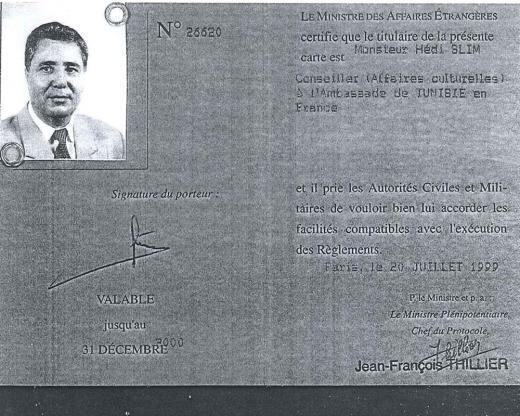 The practices revealed in these documents are hardly surprising, given the hegemonic nature of the RCD under Ben Ali. However, these archives detail the inner workings of the party in France and give solid proof that it behaved with impunity, with clear disregard for Tunisian law. FRANCE 24 was only given access to part of the documents that the “Botzaris Justice and Truth” organisation has in its possession. Further examinations will likely yield new revelations.

By Sarra Grira, journalist for the FRANCE 24 Observers.