Insect diet may be the solution for a hungry world

Mexicans eat deep-fried grasshoppers. Japanese love wasp cookies. Leafcutter ants are considered a delicacy in Colombia, as are some caterpillars in South Africa. And in Thailand people cook everything from water beetles to bamboo worms. Even though eating insects has often been dismissed as a cultural eccentricity, it might soon become one of the answers to pressing global problems like hunger and environmental destruction.

Mexicans eat deep-fried grasshoppers. Japanese love wasp cookies. Leafcutter ants are considered a delicacy in Colombia, as are some caterpillars in South Africa. And in Thailand people cook everything from water beetles to bamboo worms. Even though eating insects has often been dismissed as a cultural eccentricity, it might soon become one of the answers to pressing global problems like hunger and environmental destruction.

As disgusting as the idea of eating insects may be for many, the reality is that eating insects, or entomophagy, is practised in more than half the countries in the world. There are an estimated 1,462 species of edible insects in the world, ranging from beetles, dragonflies and crickets to ant eggs and butterfly larvae, according to research by Wageningen University in the Netherlands. More than 250 species are eaten in Mexico alone.

But more than tasty snacks, insects could become a protein-rich, green and global source of food, according to the Food and Agriculture Organization of the United Nations (FAO). The FAO says the projected growth of the world’s population – around 2.3 billion more people by 2050 – will require a significant increase in food production. As a result, demand for livestock is expected to double during the next four decades. However, almost 70% of the land in use for agriculture in the world is for livestock, meaning that the need for more grazing land would bring further deforestation. Agriculture also contributes significantly to greenhouse gas emissions and puts a strain on valuable resources like water. Finding alternative protein sources other than livestock is therefore crucial. 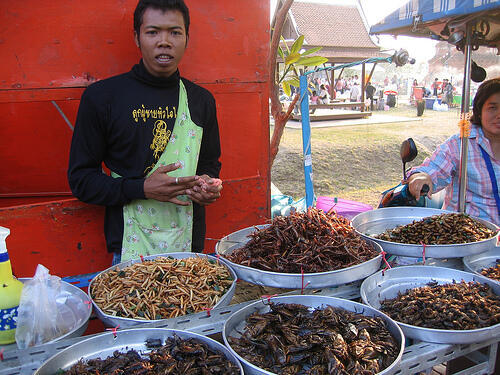 The FAO and scientists around the world are suggesting that insects could be a serious alternative. To begin with, insects have about the same nutritional value as beef, chicken or fish. They are easily raised in a sustainable way, since they require less land and water than cows, pigs or goats. They also reproduce at a quicker pace than mammals. What's more, people in developing countries can harvest them without owning vast properties of land or making huge financial investments.

Currently the FAO is promoting sustainable cricket farms in Laos. Meanwhile, in the United States and Europe, a small but growing number of chefs and foodies are praising the benefits of eating insects and some grocery stores like Sligro in the Netherlands have begun marketing them.

“Insects are not just an alternative source of food, but they’re superior in many ways”

Danielle Martin is a foodie and insect lover. She posts gourmet insect recipes on her blog “Girl Meets Bug” and hosts insect cook-offs in museums and schools across the United States.

I first encountered edible insects in Mexico, when I bought a packet of ‘chapulines’ [deep-fried grasshoppers.] I remember being suddenly surrounded by a group of children that wanted to eat them right off the table. It really struck me that entomophagy was very much alive.

Since eating insects is so unusual in the U.S., people mainly come to my presentations out of curiosity. There is a sensational aspect to it: they basically want to see the girl eating the bugs. But as they are watching and it smells like regular food to them, there is a moment of realization that bugs can be good.

People go through a whole process when they eat insects for the first time: first they close their eyes tightly, they put the bug in their mouths and their whole body is on guard. As they start chewing, their eyes open and their face sort of blooms. ‘That wasn’t so bad’, they’ll say. And then they grab another one… Children are more open-minded: they will go through the same process, but they’re more enthusiastic about it.

There are some rules about which insects you can eat. I always say, ‘Black, green and brown, swallow it down; red, blue and yellow, leave that fellow’. It’s definitely best to avoid insects with flamboyant colours that proclaim to the rest of nature that they’re not palatable. I personally prefer to eat insects in their larval stage. My favourites are bee larvae, which taste like bacon and mushrooms, and crickets, whose flavour is a cross between almonds and shrimp. On the other hand, I didn’t enjoy eating a walking stick insect because it tasted like leaves. Usually if you eat what they eat, they will probably taste good. For example, waxmoth larvae eat bread and honey, while crickets eat fruits and vegetables.

When people try bugs, they usually describe the taste as either nutty, mushroomy, earthy or shrimpy. Eating insects is an acquired taste, but so are many things that have intense and unusual flavours, like mussels or strong cheeses. In the 1800s lobsters and shellfish were not considered delicacies in America, but fed to livestock or ground and used as fertilizer. This shows us that cultural attitudes change. In Cambodia crickets are so popular that they have even had shortages. So I think it is possible for insects to move from snack to main food source.

Insects are not just an alternative source of food, but superior to traditional protein sources in many ways. Crickets are a great substitute for beef, offering the same amount of proteins but more iron. Waxmoth larvae are high on omega 3, 6 and 9, traditionally found in fish, but have no mercury. And there is no problem in farming them by the thousands. Unlike raising a cow, farming insects is something anybody can do. It requires little expertise, little expense and little space, making eating bugs guilt-free and highly sustainable. I am raising waxmoth larvae in my closet.

In the end, I believe it will be about including something in your diet that is not only good for you, but also tastes great.” 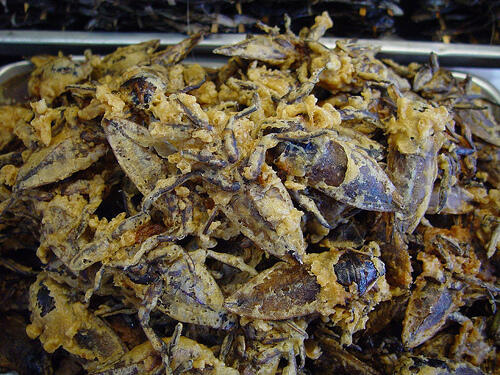