Chinese web users and journalists have defied censors to unleash unusually high levels of criticism towards the government in the wake of a horrific train crash on Saturday, July 23. Many fear that in the country’s rush to modernize, human safety is being sacrificed.

Chinese web users and journalists have defied censors to unleash unusually high levels of criticism towards the government in the wake of a horrific train crash on Saturday, July 23. Many fear that human safety is being sacrificed in the country’s rush to modernize.

According to official accounts, the Chinese response to the crash in the outskirts of the eastern Chinese city of Wenzhou was exemplary. The disaster “reflects the superiority of socialism”, the newspaper China Philanthropy Times said, praising the swift government reaction and hundreds of spontaneous blood donors who flocked to the site.

Yet this view isn’t shared by thousands of users of China’s popular Twitter-like Sina-Weibo service, many of whom released pictures and videos of the crash long before official news agencies did. In the past few days, micro-bloggers have questioned whether the true death toll may be higher than the official one of 39, and argued that the high-speed rail system is being developed too fast, to the detriment of security standards.

Above all, thousands have criticised what they say is the local authority’s rushed response to the crash, and the national government’s apparent indifference. It was Weibo users who revealed that the railway ministry buried parts of wrecked trains near the site instead of sending them to be examined to determine the causes of the malfunction. The ministry said the trains contained valuable “national level” technology that could be stolen and thus must be buried, but web users fear they are hiding evidence of construction flaws. On Thursday, the state-run news agency Xinhua reported that the wreckage  was dug out again and brought to a nearby train station for further investigation. 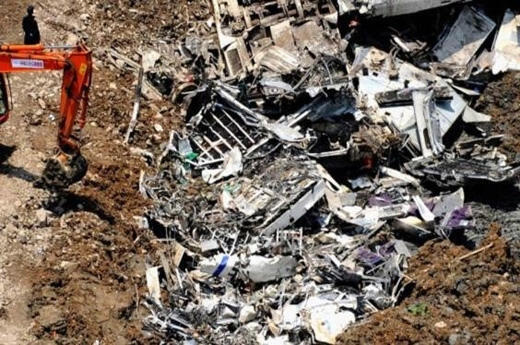 Photo posted on Weibo reportedly showing excavators burying part of the crash devris away from the site.

Six days after the accident, Chinese Premier Wen Jiabao visited the scene of the crash for the first time, explaining that he had been sick since July 17 and that doctors had barred him from going out. However Web users suspect that Wen may not have told the truth: on July 18, he met with Iraqi prime minister Nouri al-Maliki and on July 21 with Cameroon’s president Paul Biya. After being reduced to silence during the tainted milk and exploding watermelon scandals, China’s online community seems determined to hold authorities accountable.

"They cared less about saving people than about putting the incident behind them, fast."

The Chinese blogger known as “Heretic”commented on the incident at length on his blog.

This accident has made people in China angrier than they have been for a long time. Personally, I feel both sadness and outrage. Sadness at the human tragedy, outrage at the reaction of the railway ministry. They botched the rescue, blocked a transparent and thorough investigation [into the causes of the crash] and refused to release the facts concerning the crash. Here are some of the things that make me angriest.

This incident highlights many of the problems in Chinese society. The system is remorseless and has no regard for the people who live in it. The most depressing thing is that the situation shows no sign of improving. 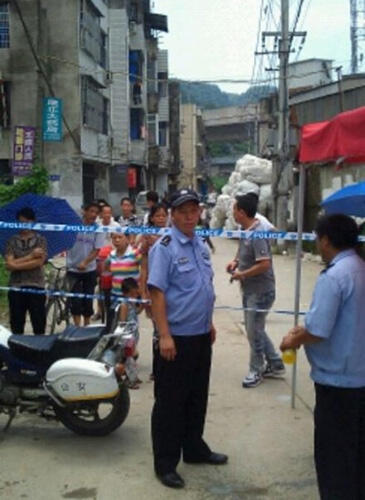 Police bar journalists from accessing the scene of the crash. Photo sent by one of our Observers in China. 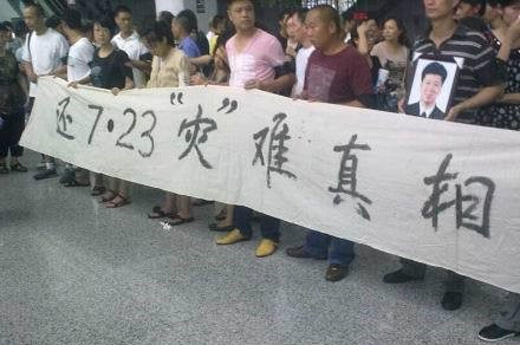 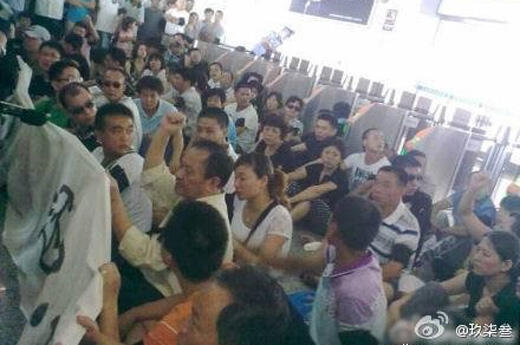 Victims' relatives protest near the crash site. The banner reads: "Restore the truth of the July 23 disaster."