Popular blogger prompts thousands of Russians to clean their city

To many Russians, the concept of not littering and recycling waste is totally as foreign as green cheese. After years of environmental neglect by the government and piles of trash littering every streetcorner, a growing number of citizens have decided that they’ve had enough. Using the Internet as a mobilisation tool, they have resolved to clean the country’s streets, parks and rivers.

To many Russians, the concept of not littering and recycling waste is as  foreign as green cheese. After years of environmental neglect by the government and piles of trash littering every streetcorner, a growing number of citizens have decided that they’ve had enough. Using the Internet as a mobilisation tool, they have resolved to clean the country’s streets, parks and rivers.

Last April, popular Russian blogger Sergey Dolya created the movement “Bloggers against Garbage.” The idea behind the movement is simple: local bloggers choose a heavily littered place near them, then use social networks to rally as many people as possible for a collective cleanup.

The movement initially counted just several dozen participants, but has grown exponentially to reach several thousand members across the country. Its most ambitious goal yet: a nationwide litter cleanup day planned on August 6.

Cleanup of a park in the town of Dedovsk, near Moscow, on June 17: 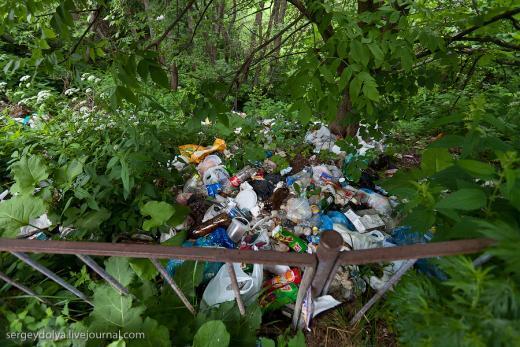 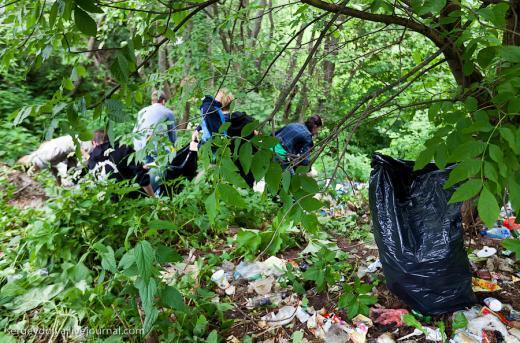 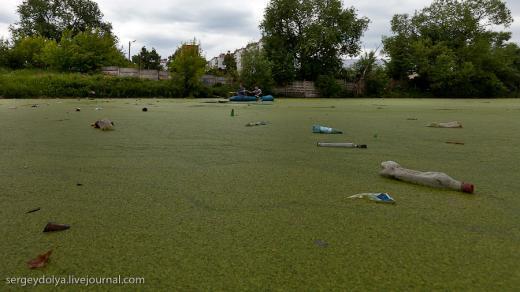 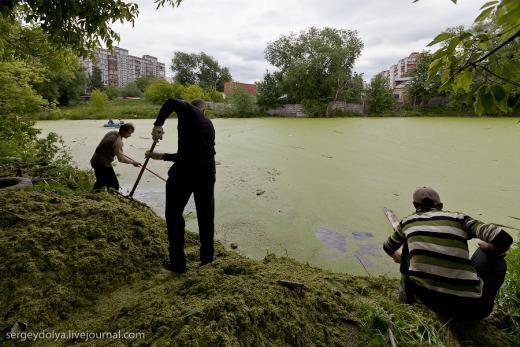 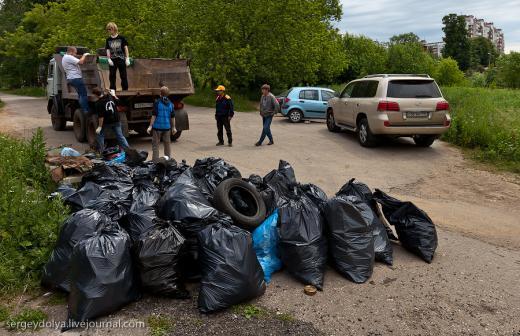 "People don’t hesitate to leave trash behind in a dirty place. But if it’s clean, who wants to be the first to litter?"

Moscow-based Sergey Dolya is the founder of Bloggers against Garbage. His travel blog has attracted over 50,000 subscribers on social blogging network Livejournal.

"Four months ago I was sailing on the Volga river near the [southern Russian city] of Astrakahan. I saw how the riverbanks were littered with bottles and all sorts of waste, left behind by tourists and amateur fishermen. I decided then and there that I was sick of living in a dirty country. I don’t understand: when you’re at home, and you drink tea, you don’t drop the teabag on the ground, you put it in the bin, right? So why, when outdoors, do people leave their trash on the floor? I want this to change.

My blog is very popular in Russia, it’s the fourth most popular blog on the social network Livejournal. It’s a powerful tool, and I had been wondering for some time how I could use it to do some good for my country. That’s why I decided to launch Bloggers against Garbage. I posted a message on my blog saying: 'Guys, for those of you who are tired of just sitting in front of your keyboards and want to do something concrete for your country, write me and become a rubbish cleanup organiser in your community.' I received hundreds of responses. Many people are now actively organising cleanup operations in their towns and cities, and keeping me informed. After each cleanup, we leave a sign on the site (we don’t have a standard sign yet but hope to come up with one before August) that reads: 'This site has just been cleaned. Please don’t litter any more.' People don’t care about leaving trash behind in a dirty place. But if it’s clean, who wants to be the first to litter?

The idea works: I expect some 20,000 to 30,000 people to take part in the August 6 nationwide cleanup day. There are cleanup actions planned in over 100 cities and towns, and in 80 places in Moscow alone. We’re also pushing for the implementation of a long-overdue national waste recycling program, which exists in every developed country except Russia [According to the Russian Agency of Ecological, Technological and Nuclear control, Russia generates over 50 million tons of solid household waste each year, of which only 6% is recycled. The US, by comparison, recycled over 33.8% of the 243 million tons of household waste produced in 2009.

Some local authorities have begun to take interest in the project. I know the governor of Astrakhan, who’s an active blogger as well. I called him to tell him about the August 6 cleanup plan and said that we would use some help. He was very enthusiastic, and sent a letter to his fellow governors asking them to participate in the movement. I hope we’ll get some financial or material aid.

We’re also visiting mayors and local councillors, to ask them for help with transportation. Teams of people can pick up litter, but we need trucks to transport it. Some mayors have begun providing trucks. We hope that our actions will not only help clean up streets, but also encourage people to litter less and authorities to implement lasting waste-disposal and recycling policies.”

Bloggers against garbage cleanup in the southern Russian city of Krasnodar on July 1: 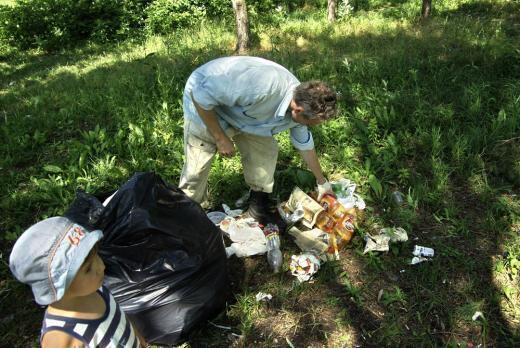 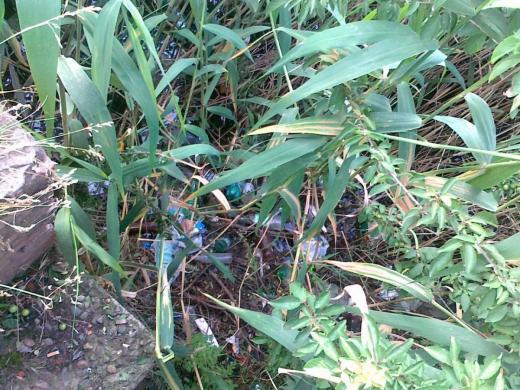 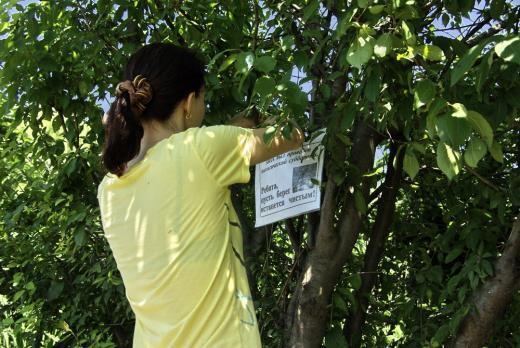 Bloggers against Garbage cleanup in the northwestern Russian city of Kazan, on July 3: 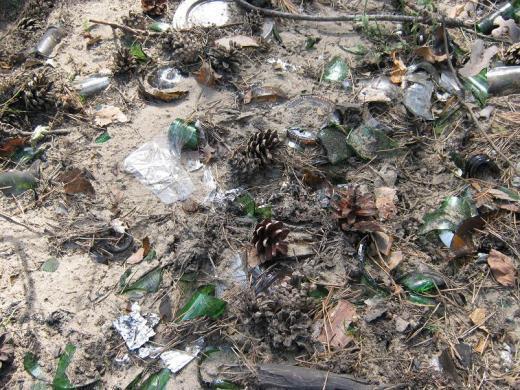 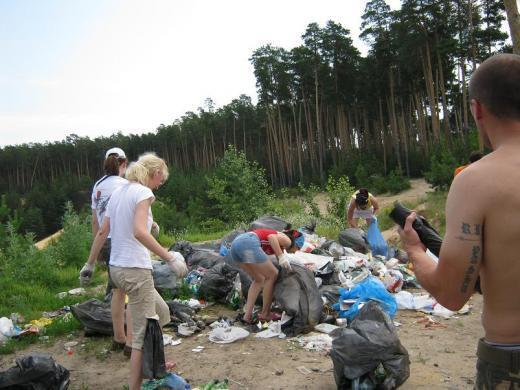 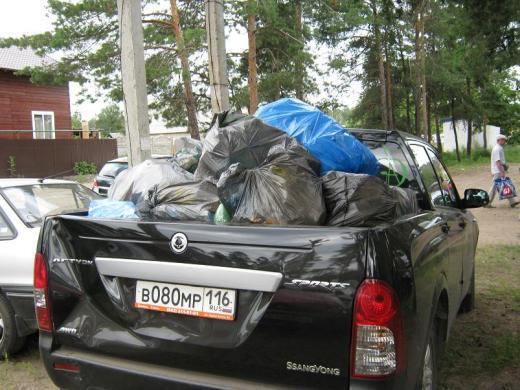