No one expected that the “Freedom Flotilla II: Stay Human” would have a seamless run to the Gaza strip. Sure enough, in the latest of a series of hurdles that flotilla organisers have had to overcome, Greek coastguards halted a Canadian boat bound for Gaza shortly after it attempted to leave the Mediterranean island of Crete. As many wonder if the mission to Gaza will ever launch, our Observers tell us about the preparation that went into a trip that may never be.

No one expected that the “Freedom Flotilla II: Stay Human” would have a seamless run to the Gaza strip. Sure enough, in the latest of a series of hurdles that flotilla organisers have had to overcome, Greek coastguards halted a Canadian boat bound for Gaza shortly after it attempted to leave the Mediterranean island of Crete. As many wonder if the mission to Gaza will ever launch, our Observers tell us about the preparation that went into a trip that may never be.

It is not the first time a fleet of vessels has sailed toward the Gaza strip bearing humanitarian aid in an effort to challenge Israel’s naval blockade there. Last May, activists launched their most ambitious attempt to break through, sending a flotilla comprised of six boats. But on May 31, Israeli naval commandoes intercepted the flotilla, storming one vessel, the Mavi Marmara. Nine activists died in the raid.

The incident was quickly condemned by the international community, and a UN probe found that the Israeli forces had used “totally unnecessary and incredible violence” against the flotilla.

Israel says it imposed the blockade in 2007 to stop weapons reaching Hamas, the Islamic militant group that rules Gaza.

More than a year later, organisers and activists from around the world have banded together in an effort to break the blockade again. Despite the hitches, activists have vowed to keep trying to break the blockade and this time, many of them have had “training sessions” to prepare them for some of the hurdles they’re likely to encounter in their blockade-breaking bid.

US Boat to Gaza, also known as "The Audacity of Hope", listen to the rules of conduct during an orientation on non-violent resistance in the Greek capital Athens. Video published by GazaHumbleOne on YouTube on June 25.

Medea Benjamin is a US citizen and co-founder of both CODEPINK, an organisation founded in 2002 in opposition to the Iraq war, and Global Exchange, a California-based NGO. She is one of the passengers aboard the US boat to Gaza, also dubbed “The Audacity of Hope”- named after US President Barack Obama’s 2006 best-selling autobiography. She and the others on board the boat received instruction on what to do in case of a confrontation with Israeli forces from two fellow-passengers trained in non-violent resistance.

People had to apply for a place on the boat. I thought it was strange to have a competition to risk one’s life, but there were actually many more applicants than there was space. People were then selected on criteria such as ethnicity and diversity.

We all paid our own way and we flew to Athens where we met for a special training in non-violent resistance. The training was for several days. We were made to simulate having our boat intercepted by the Israeli military and what we would do if we encountered anything from tear gas to attack dogs to snipers. 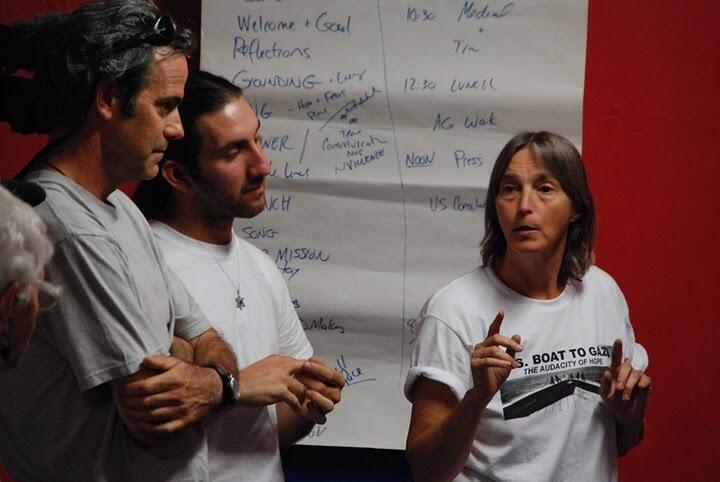 "The Audacity of Hope" passenger Lisa Fithian helps to lead the orientantion on non-violent resistance.

“Nobody should get hurt”

The thing that was emphasised to us during this training was that nobody should get hurt. They taught us techniques such as taking off our glasses in case we get hit by soldiers or thrown to the ground, or have our heads smashed against the floor boards. They also showed us what type of ear plugs can be used against sound bombs, and we discussed whether or not we should be sitting or standing when the soldiers board the vessel, or whether we should be on the stern or the bow of the boat. Each technique has its advantages and disadvantages.

What they taught us is that there’s no one way to engage in non-violent resistance – it’s a choice. They present you with the information and you have to make a choice for yourself”. 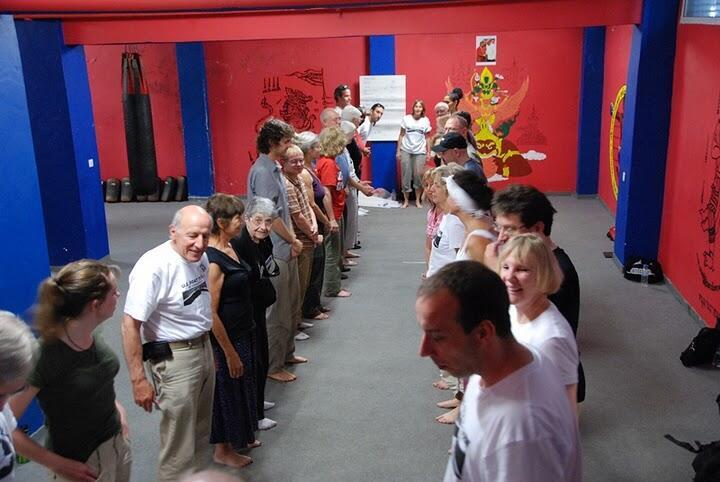 "The Audacity of Hope" passengers in two rows as they participate in the boat's orientation on non-violent resistance.

“We all agree on our commitment to non-violence – no weapons and no attacking Israeli soldiers”.

Robert Naiman is another passenger aboard “The Audacity of Hope”, and works as the policy director of Just Foreign Policy a Washington D.C.-based NGO.

During our training we weren’t told to do or say anything specifically if we encountered Israeli soldiers. It was more about talking about the different types of scenarios we could find ourselves in and their possible consequences.

One of the things that came up was that when the commandos storm the ship, it’s probably not the opportunity for dialogue. They’re trained commandos, they’re pumped up, psychologically braced for a violent encounter and they will have a goal in mind.

We wouldn’t have come on this mission if we weren’t ready to risk our lives, but trust me, we all want to live.

“We had to practice a potential raid situation”

We discussed a range of possible reactions we could have. Many people wanted to sit in a corner with their hands on their laps, you know, speak when spoken to. Others thought it was important to be more assertive in protecting the ship, and hide some of the equipment [such as cameras and computers] and documents on it. We all saw how valuable it is to protect these things after the last flotilla that went to Gaza. Some of us were thinking, even if we can delay the soldiers for 30 seconds it would be worth it to try and protect a little of what’s on the boat and to communicate what happened later.

Within certain perimeters though, we’re all in agreement. We all agree on our commitment to non-violence – no weapons and no attacking Israeli soldiers.

"The Audacity of Hope" passengers simulating a raid by Israeli soldiers. Photos published on ustogaza.org on June 23.

We had to practice a potential raid situation, where some of us played Israeli soldiers and others were trying to resist to help us understand. I played an Israeli soldier, so I was the one scaring other people. But had it been the other way around, I think my approach would have been that of sitting in the corner with my hands on my lap.

On the flotilla it could be dark, noisy and it could be unclear what’s going on. When I was imagining what I would do if an Israeli soldier tries to force me to get up, I thought, ‘I’m going to comply’. With that said, once the confrontation is over – once we’re in custody and there’s no pretext of threat – then we’ll get more uppity.

Right now our boat is stuck in Greece, but we had to be prepared for this scenario. The overall goal of this mission was to bring international attention to the blockade in Gaza, and if you look at the international press over the last few weeks, we’ve done that. We’ve accomplished our mission even if we’re not sailing the high seas”.