Aeronautic enthusiasts gathered in the Paris suburb of Le Bourget over the weekend to check out the latest advances the industry has to offer at the 49th International Paris Air Show. The week-long professional event opened to the public on Friday to the great excitement of our Observer, who was among the eager throngs taking in the sights, the sounds and the thrills at Le Bourget.

Aeronautic enthusiasts gathered in the Paris suburb of Le Bourget over the weekend to check out the latest that the industry had to offer at the 49th International Paris Air Show. The week-long professional event opened to the public on Friday to the great excitement of our Observer, who was among the eager throngs taking in the sights, the sounds and the thrills at Le Bourget.

The Paris air show, which began in 1909, is the world’s leading air show and this year boasted more than 2000 international exhibitors and was expected to attract nearly 200,000 visitors from the general public. The show’s star this year appeared to be planemaker Airbus, with a record $72 billion’s worth of orders and its new A380 stirring the hearts of military and space craft fans alike.

As the event closed its doors on Sunday, adoring spectators took a last look at old favourites and exciting new innovations, before starting the countdown to the next show, in 2013.

“It’s always a big feeling for me, jets screaming across the sky – it never gets old”.

John Mahony is an Irish citizen who has lived in France since 1999. An aeronautic enthusiast from a young age, Mahony visited the International Paris Air Show at Le Bourget on Friday for the first time in six years. 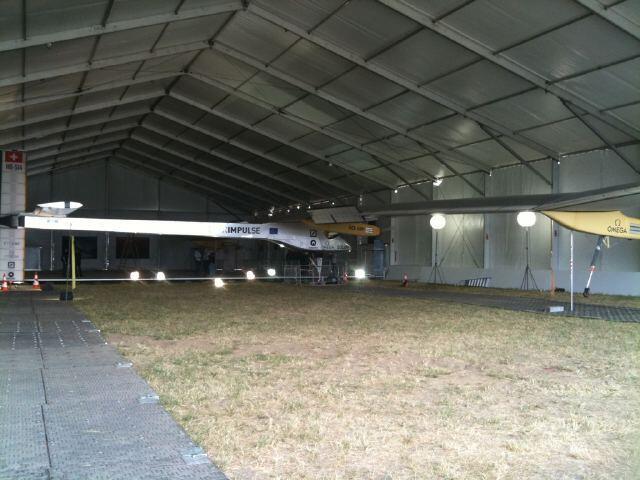 The really big new thing at the air show this year was the Solar Impulse. It’s an aircraft that can fly solely on solar energy and it’s silent – you don’t hear a squeak out of it. It’s very slow, a flight from Brussels to Paris will take maybe 12 hours, as it flies at about 60 km per hour. It’s more of a proof of concept that [these types of things] can be done. If they can develop an engine that could move an aircraft at a good speed, maybe it could be used instead of helicopters in cities to travel short distances.

There was also an interesting Russian aircraft called a Altair – it’s a fire fighter, so part of its demonstration was that it dumped 12 tonnes of water on the run way. It’s got an adapted tank that allows it to carry so much water. 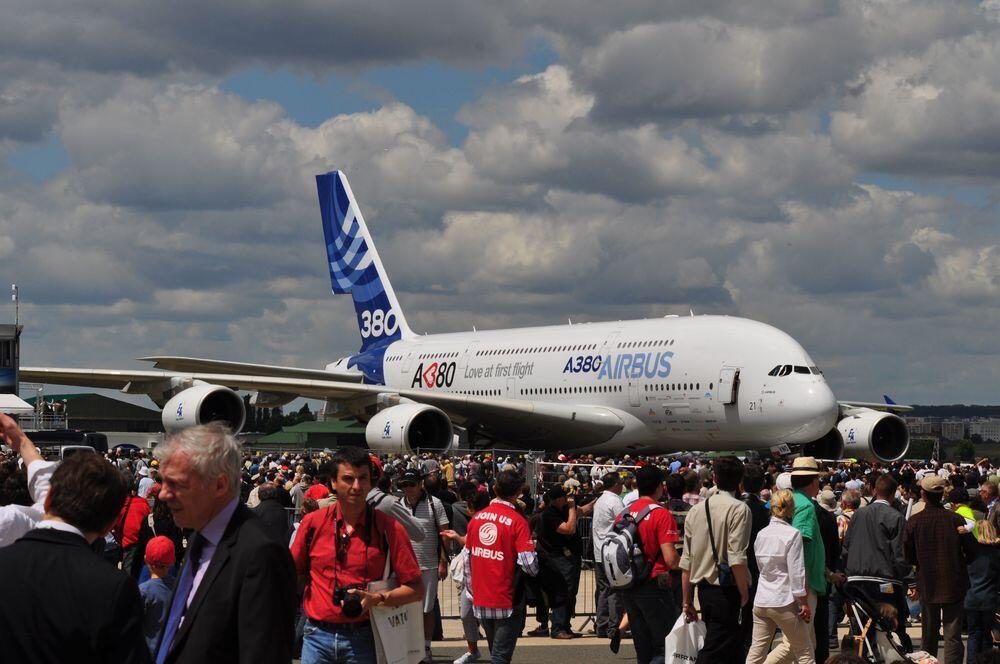 Airbus' new star the A380, surrounded by admirers. Photo courtesy of John Mahony.

But out of a technical design and engineering perspective, watching the A380 floating around in the air up there was just amazing [because of its weight]. It’s the biggest airliner in the world. There were huge delays in getting it out because it’s such a complex model and they had a little accident with the wing tip [which was damaged in an incident at Le Bourget]. The big selling point of this model is the fuel efficiency compared to other aircraft. It can do very long flights, like from Paris to Sydney and use less fuel than other planes would. In terms of fuel efficiency, the Boeing 787 Dreamliner is the closest thing to it. 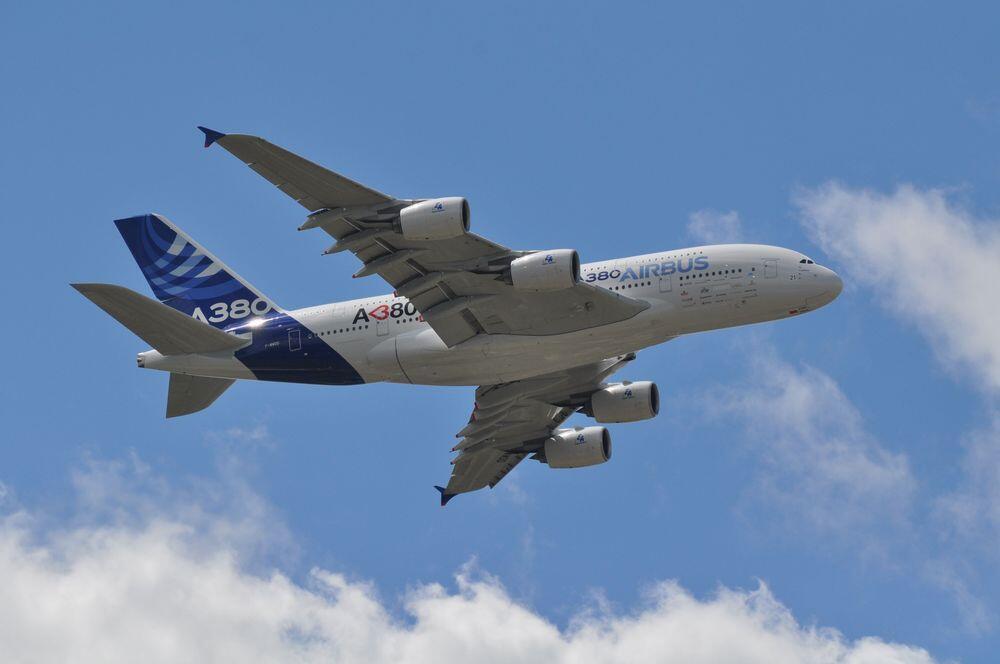 Given how much the price of oil has gone up in recent years, it’s important to airlines to compact their costs. It’s also a huge plane. I think you can get about 555 people on a A380, whereas before that the Boeing 747 was the biggest model, which I’m pretty sure fit about 300-400.

[What’s also impressive] is the scale of the event and what’s happening with the business out there. You have a company that builds the wheels or the wings. There are a lot of smaller companies that build these things and then they are all put together by Airbus. 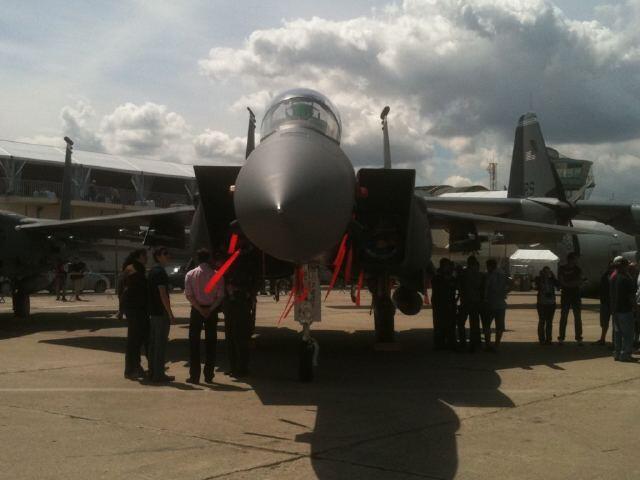 The nose of a F15-E jet fighter. Photo courtesy of John Mahony.

From a technical perspective [I prefer] military planes. As a journalist put it to me once, military engineers can be called the ‘merchants of death’. There’s the technology there to take out a fly’s eye, but in the back of your mind you wonder, ‘should we be doing this?’ 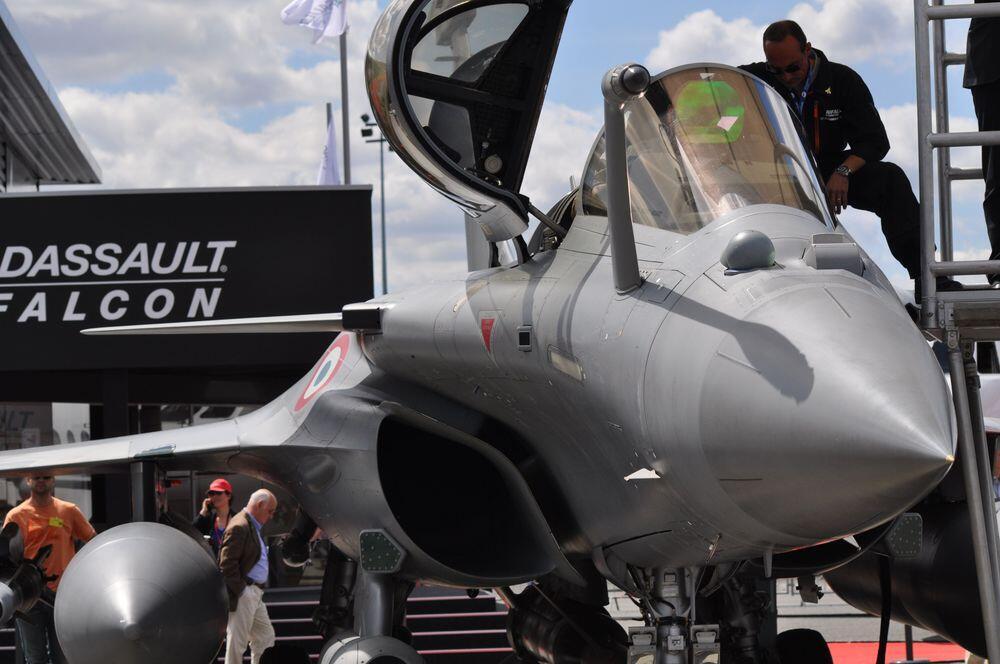 There was of course the Rafale, which is the darling of the French military. It’s a generation four aircraft [a classification of aircraft that denotes when the aircraft’s technology was developed], but it’s slightly behind other similar American aircraft. A Dassault engineer told me that one of its major shortcomings is that it can’t carry the same payload as a lot of other planes. 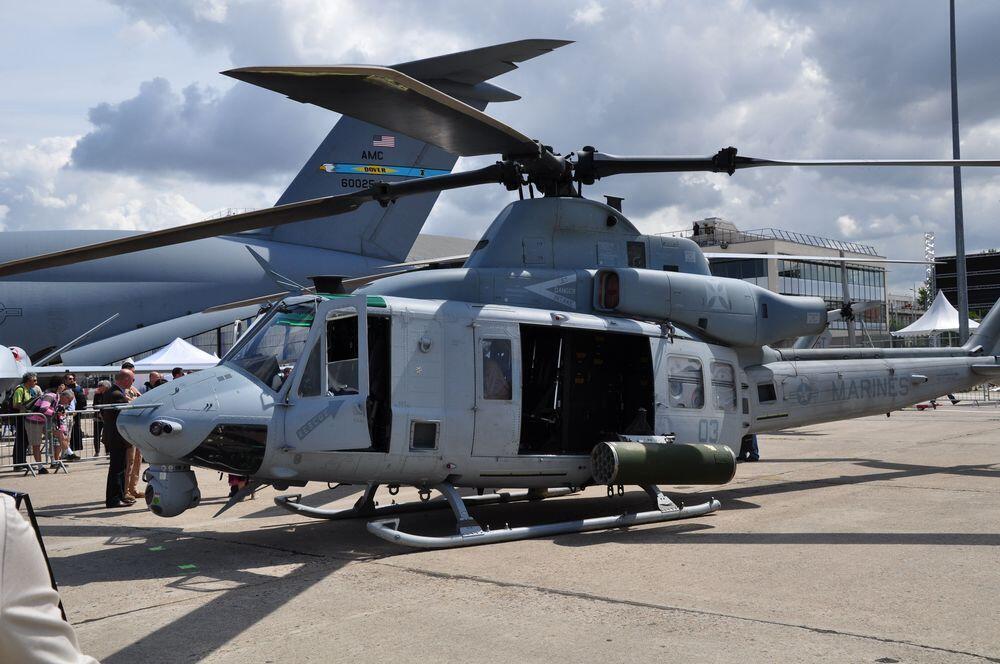 The UH-1Y helicopter is a model that has been used by the US Marine Corps. Photo courtesy of John Mahony.

There was also [the US Marine Corps’] AH-1Z. It hasn’t been in combat yet, which, given the amount of combat the US is in, is pretty impressive. It’s very similar to the old aircraft [former H-1 models used by the US military], more than 80 percent of it has the same parts as the old one. A lot of the difference is in the electronics. The tests to make sure it was battle ready were completed last September. In terms of maintenance, it’s very low maintenance, which is important for the Marine Corps because they have less resources than the army has for the AH-64 Apache

It’s always a big feeling for me, jets screaming across the sky – it never gets old. The sound, the spectacle, it’s amazing”.