For better, for worse: Malaysian wives taught to be ‘obedient prostitutes’

According to a newly created club in Malaysia, the secret to a successful marriage is simple: an obedient wife who makes sure her husband is sexually satisfied. Launched on June 4 in Kuala Lumpur, the 1000-member strong ‘Obedient Wives Club’ (OWC) has sparked controversy in one of the most modern and progressive Muslim-majority countries.

According to a newly created club in Malaysia, the secret to a successful marriage is simple: an obedient wife who makes sure her husband is sexually satisfied. Launched on June 4 in Kuala Lumpur, the 1000-member strong ‘Obedient Wives Club’ (OWC) has sparked controversy in one of the most modern and progressive Muslim-majority countries.

The new club says is it can cure social ills and curb divorce rates by teaching women to “obey, entertain and serve their husbands”, thus preventing men from straying into sin. It offers marriage counselling and motivation courses to both men and women, with a “focus on wives”.

The club was founded by a business company called Global Ikhwan, which has ties to the banned radical Islamist sect Al-Arqam. Both the company and the religious movement were founded by the late controversial cleric Ashaari Mohamed. Most of the OWCs members are also Global Ikhwan employees.

Although most politicians and activists in Malaysia have dismissed the OWC as a handful of backwards extremists, some have expressed a degree of sympathy for the club’s ideas. The right-wing UMNO party was forced to publicly distance itself from the club after its n°2 Mohd Nasir Ibrahim, who attended the June 4 launch, was quoted as saying that he supported the view that most social problems had their roots at home. 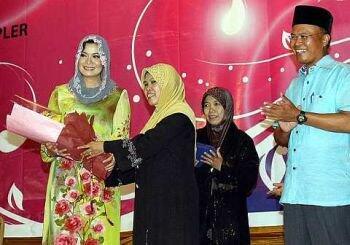 Aquila, 44, is one of the founding members of the Obedient Wives Club. She studied languages and linguistics in England between 1987 and 1991, and has been an employee of Global Ikhwan for the past ten years.

I have been married for 19 years, and my marriage is a very happy one. I am convinced that many marriages face problems or end in divorce because the wife doesn’t know how to fully satisfy her husband. When he comes home from work and is tired or stressed, don’t pester him with questions or your own needs. Smile warmly at him, embrace him. By being a good wife, you are performing God’s will, and you will be rewarded.

Marriage, especially long-lasting ones, can fall into routine and become dull for both partners. This is why some men turn towards prostitution – even if they have a good wife, they may need something more exciting. If you serve your husband even better than a prostitute does, by obeying his desires but also being warm and loving, then he will have no need to sin. If you serve your husband like a first-class prostitute, he will give a lot back to you in return. It is a rewarding effort.

“God created man above woman, but that does not mean that women do not have an important role to play.”

Of course, there may be times that I don’t agree with my husband, or do something that may upset him. In those cases it is important to talk openly and be forgiving. For example, my husband and I were married 13 years before he decided to take a second wife [polygamy is permitted within Malaysia’s Muslim community]. At first I felt angry and hurt, I was afraid he would no longer love me. I confronted my husband, and he asked me: “Do you not love each of your four children equally? It is the same for me. It is not because I take a second wife that I will not love the first.” I was reassured, and now my co-wife is like a rainbow in my home, someone I can share the love and burden of marriage with. [Aquila’s husband and co-wife also work for Global Ikhwan].

God created man above woman, but that does not mean that women do not have an important role to play, on the contrary. By maintaining harmony within her household, she is helping maintain harmony within society as a whole.”

Extracts of the OWC's launching ceremony on June 4 in Kuala Lumpur. The launch included speeches by members, an awards ceremony, a skit showing a 'disobedient' (and unhappy) wife begging forgiveness of her husband, and a mass wedding recepion for eight couples. Video courtesy of Malaysiakini.tv.

“The club is insulting and degrading for all Malaysian women”

Matthew Tard Ong, 22, is a Malaysian-born PR student in Australia. He is the founder of a Facebook group called ‘We do not want sexist nonsense from Global Ikhwan’.

Although I'm a man and a member of Malaysia’s Buddhist community (and therefore not directly affected by the OWC), I was absolutely revolted when I first read about the club. It is insulting and degrading for all Malaysian women.

Assimilating women in general to prostitutes is bad enough, but the most dangerous thing about the club is that it tells women that they are responsible for everything that is wrong in their couple or family. Even if their husband is violent, even if they are victims of abuse, they still have to say yes to everything in the name of ‘obedience’.

That’s what pushed me to create a Facebook group denouncing the club, which now has over 4,700 members. I have also teamed up with Malaysia’s white ribbon group against domestic violence. We are lobbying the government for it to review the public statements of the OWC and monitor its activities, to verify that they do not breach Malaysian law on gender equality and women’s rights. We plan to hold a press conference on the symbolic date of Father’s day next weekend, to call on men – and women – to turn their backs on such sexist nonsense.”