Egyptians back in Tahrir Square for ‘second revolution’

Three months after the popular uprising that ousted former Egyptian president Hosni Mubarak, Egyptians are back on the street to demand faster reforms and a speedy trial for the fallen president and his aides.

On Tahrir Square on May 27. Photo posted on TwitPic by @TarekMostafa.

Three months after the popular uprising that ousted former Egyptian president Hosni Mubarak, Egyptians are back on the street to demand faster reforms and a speedy trial for the fallen president and his aides.

Tens of thousands of people converged on Cairo's iconic Tahrir Square on Friday, May 27, in what organisers called a "second revolution". The nerve centre of the 18-day uprising that ousted president Hosni Mubarak in February was once again decked with hundreds of Egyptian flags, banners and posters. Thousands more marched in the coastal city of Alexandria.

The ruling military council called on people to refrain from going out to Tahrir Square, warning of “suspicious elements trying to take actions that would sow strife between Egypt’s people and the military” in a Facebook message posted on Thursday. Egypt’s powerful Muslim Brotherhood also spoke out against the protests.

In a move seen as aimed to appease public discontent, authorities on Tuesday ordered Mubarak to stand trial on charges of graft and the "premeditated killing" of protesters during the February demonstrations.

Yasser Shoukry is an activist for the Egyptian Social Democratic Party and the Popular Alliance Party (centre-left and left), two parties that are calling for the creation of a civilian Egyptian state.

Mubarak has been out of power for three months, but the country still hasn’t seen any real change. The unelected military retains absolute power. Our main objective is for a new constitution that guarantees a civilian state - before there are new elections. The people who are out in the street are those who oppose military rule, but also object to radical Islamists and the Muslim Brotherhood taking advantage of the situation to spread their influence. They are represented by the National Council [a newly created body of experts charged with proposing solutions and policies to the transitional government].

Our second goal is the acceleration of the trials of Mubarak and his sons, and the removal of regime cronies from top jobs in the police [force], universities and other public institutions. If you compare the slow procedure in Mubarak’s case to the haste with which known activists continue to be arrested and charged with ‘fomenting public disorder’ by military tribunals, there’s a real contradiction. Why blame the delays in Mubarak’s case on slow court procedures, then put non-violent civilians through an emergency procedure in military courts? Every citizen should be entitled to a fair trial in a civilian court, with no exception. Egyptians are starting to seriously doubt the transparency and good faith of the Supreme Council of Armed Forces”. 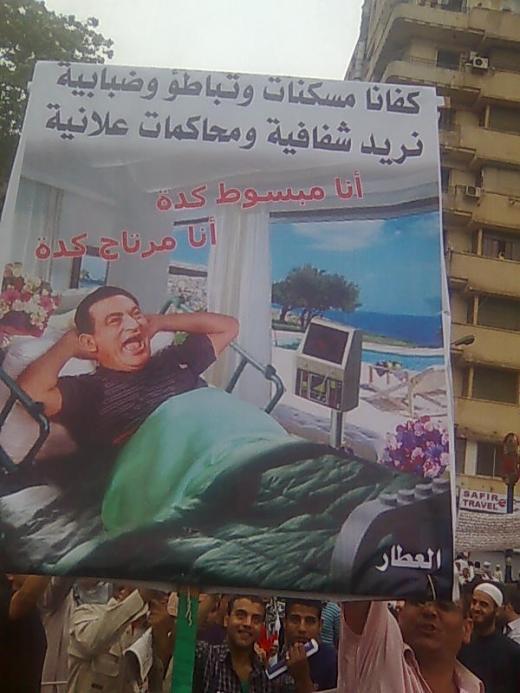 Poster representing Mubarak escaping trial while relaxing contentedly on a hospital bed. The former president was detained in a hospital, instead of in prison, after suffering heart problems. Photo posted on TwitPic by @som3andada.

"The mood is peaceful but not festive: people are determined"

Mohamed El Dahshan is an economist in Cairo. He participated in Friday’s protests.

Today’s protest is a frank success; I’d say there are easily over 100,000 people. I’ve seen Tahrir Square fuller, but still, I’m very happy to see so many people out, especially as both the Muslim Brotherhood and the military council opposed the protest. It shows that Egyptians won’t give up in the fight for democracy.

The mood is peaceful but not festive: people are determined. This is a more activist crowd than in March or April, when Tahrir felt more like a street party than a protest. Banners are reflecting very concrete demands: an increase in the minimum wage, the end of military trials for civilians, a new constitution and a speedy trial for Mubarak and his cronies. There are no police or soldiers in sight, but people are posted around the square to keep a lookout, just in case.” 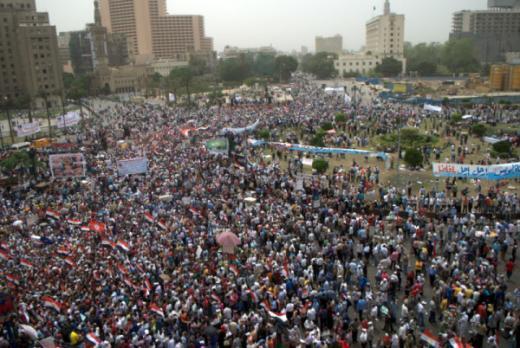 Tahrir Square on May 21, 2011. Photos posted on TwitPic by @lilianwagdy. 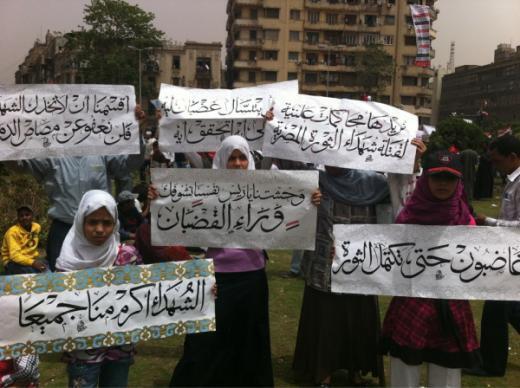 Girls hold banners reading "President, we miss you, we want to see you BEHIND BARS!" and "Angry until the revolution prevails!" Photo posted on TwitPic by @lilianwagdy 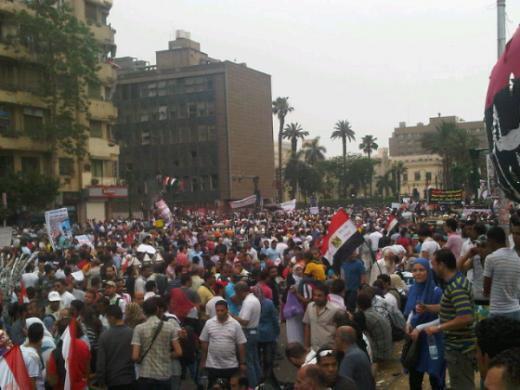 Photo posted on TwitPic by @ossamaeirashidy. 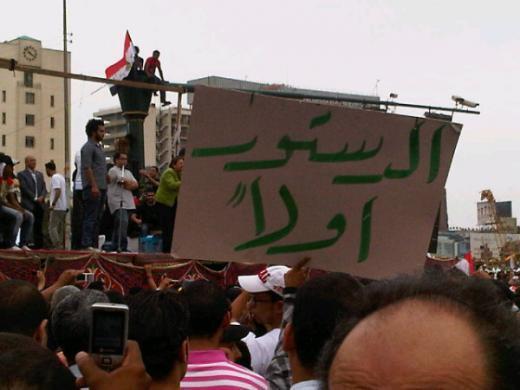 "The Constitution First". Photo posted on TwitPic by @bazramit.