Staging a political demonstration is a particularly difficult feat in Russia where authorities tend to find any number of reasons to ban protests from taking place. As a result, young Russians have come up with an off-beat way to get around the demonstration ban: they stage ‘monstrations’ instead.

Staging a political demonstration is a particularly difficult feat in Russia, where authorities tend to find any number of reasons to ban protests from taking place. As a result, young Russians have come up with an off-beat way to get around the demonstration ban: they stage ‘monstrations’ instead.

In a country where carrying a sign expressing your political opinion can get you arrested, ‘monstrations’ are seen as a way of indirectly defying the government – without breaking the law. While demonstrations are marches intended to express a serious political message, ‘monstrations’ are deliberately absurd, nonsensical, and apparently apolitical. ‘Monstrators’ are encouraged to march with banners bearing whatever message they want, as long as it makes no sense. The wackier the better. 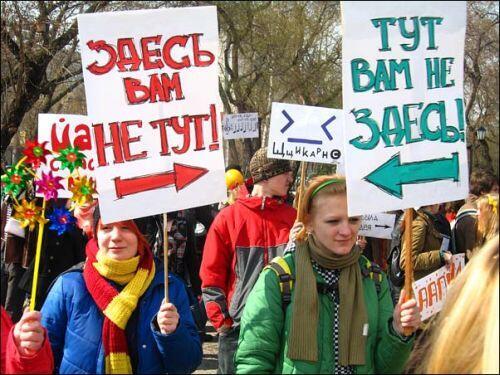 Sign from a monstration in Novosibirsk on May 1, 2011. They read : "“Here's not there for you!”, “There's not here for you!”. Photo originaly posted here.

The very first ‘monstration’ was organised in 2004 in Novosibirsk, Russia’s third largest city and economic capital of Siberia. It was organised by a group of local avant-garde artists led by then 17-year-old Artyom Loskutov. The ‘monstrators’ took to the streets on May 1, a particularly symbolic date in Russia. Under Soviet rule, May 1 was an important national holiday intended to celebrate the figure of the ‘worker’ with elaborate parades in major cities across the country. Re-named ‘The day of Spring and Labour’, it remains an important holiday in present-day Russia, during which mainstream political movements demonstrate either in opposition or in support of government policies.

Amid the serious political marches, the ‘monstrators’ stood out with their colourful signs and pointless slogans. There were less than a hundred of them, but apparently security forces were more concerned by their presence than by the thousands of communist or nationalist demonstrators also marching that day: most of the ‘monstrators’ were detained briefly, and their leader Loskutov was fined 5,000 rubles (20 euros).

Nevertheless, the ‘monstration’ got quite a bit of press, and was widely discussed on blogs and Russian social media networks. The following year on May 1, new ‘monstrations’ went ahead, this time with more people. Once again they were arrested, and once again they attracted publicity. With each year, ‘monstrations’ only grow more popular. In 2010, they took place in some 20 other cities, including Moscow, Saint Petersburg and Vladivostok. But the ‘monstration’ in Novosibirsk remains the most popular. On May 1, 2011, the number of marchers with nonsensical banners (2,500 according to the police, 4,000 according to organizers) outnumbered those of any other political party.

Thousands of people march in Novosibirsk 'monstration' on May 1, 2011. Video posted on YouTube by yashintube.

'Zombie March' broken up by police

Nonsensical 'monstrations' have insprired other Russian groups to hold absurd marches. Here, a 'March of the Zombies' on March 14 was broken up by police. 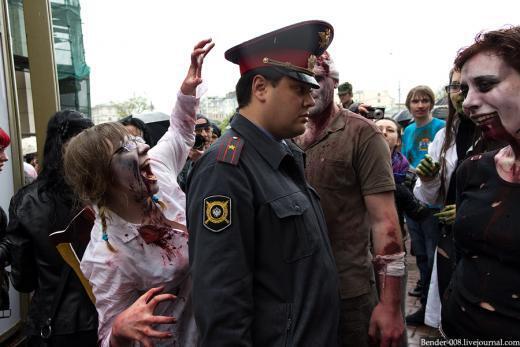 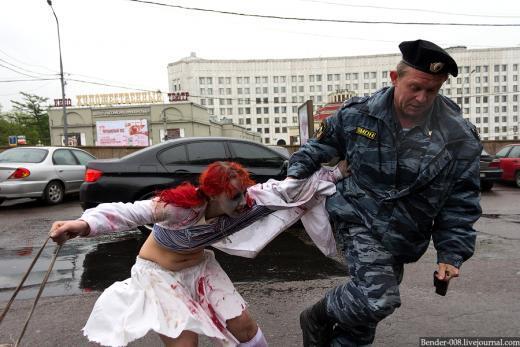 Artyom Loskutov is a member of the art group Contemporary Art Terrorism (CAT). He organised and participated in monstrations in Novosibirsk.

We came up with the idea of monstrations, when we were exploring the middle grounds between art and political expressions. The monstration was the second performance my art group organised – we had only met a month and a half earlier. We saw it as two things: firstly, a criticism of public politics (in the shape of protests), or rather the absence of such politics in Russia. Secondly, we wanted to give people a space for personal expression, which isn’t possible in regular demonstrations.

Each year, we adapt our monstrations slightly according to the changed political context of the year, so there’s no feeling of repetition. In fact, now I’d say that the monstrations are what bring real meaning to May 1 in Novosibirsk. The traditional political marches are just an awkward heritage from Soviet times, when workers were forced to go out in the streets to thank the [communist] Party for everything they had.

"Our front row banner this year read 'You're too boring to talk to'".

Our front row banner this year read 'You’re too boring to talk to'. This is a call to reject all form of dialogue with authorities, be it positive or negative, and ignore them instead. That way, we reject the framework they are tying to impose on us.

The first criminal case against me [Loskutov was arrested in 2009 for possession of marijuana, but he says the bag was planted on him by police who were irritated by his activist activities. Indeed, investigations showed that Loskutov’s finger-prints appeared nowhere on the bag, and there was no trace of marijuana in his blood] ended with a guilty verdict but an unbelievably mild sentence. In Russia, where only 1 criminal case out of 500 ends with an acquittal, my verdict can almost be seen as an absolution. I got a 500 euro fine for a charge that usually puts people behind bars for three years.

The second charge, in November 2011, was for a blog post about a night I spent in a police station. I was arrested after our performance on October 31, a Halloween parade in support of article 31 of the Russian constitution (freedom of assembly). They accused me of insulting a police officer in my blog post. My computer and all my hard drives were confiscated for two and a half months and my case was deferred to a court – but I still haven’t heard anything from them.” 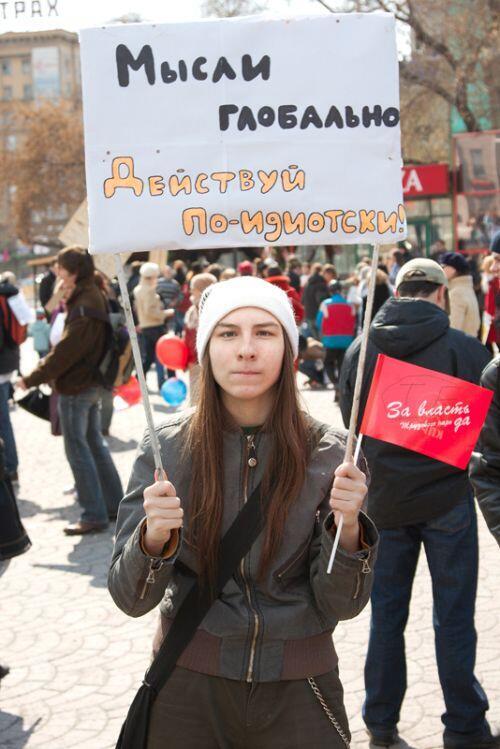 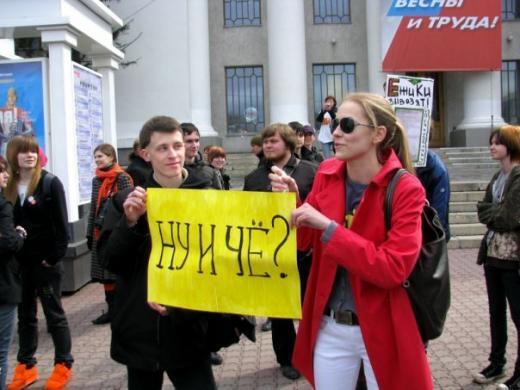 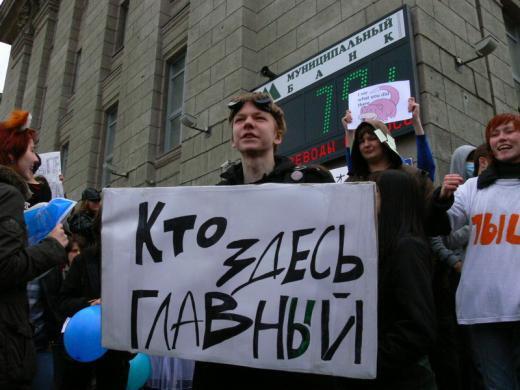 May 1 'monstration' in Moscow this year. Sample slogans: "Russia, are you OK?", "It's time to pet geese", "I want to walk on a rainbow", "This is Saint-Petersbug, baby!"  Video posted on YouTube by gdmitrenko.