Not everyone is celebrating bin Laden’s death

News of Osama bin Laden’s death sent thousands of Americans celebrating in the streets of New York and Washington D.C, but in parts of the Middle-East, the mood is not as joyful. In Pakistan, some even refuse to accept that he is dead. Read more…

Sreenshot of a Facebook page in arabic called "The martyr Osama bin Laden is not dead! We are all bin Laden!"

News of Osama bin Laden’s death sent thousands of celebrating Americans to the streets of New York and Washington D.C, but in some parts of the Muslim world, the atmosphere has not been as cheerful. In Pakistan, some even refuse to accept that he is dead.

Bin Laden, a member of a wealthy Saudi family and the founder of the jihadist organization al Qaeda, became the United States' most notorious enemy after the September 11 attacks in 2001 which he masterminded.  His terrorist organisation has also been responsible for numerous other mass-casualty attacks in various countries in Europe, the Middle East and Southeast Asia.

He was killed on May 1st in a compound in Abbottabad, Pakistan during an operation conducted by US military forces, putting an end to a ten-year international manhunt.

What are people saying about bin Laden’s death in your country? Post your reactions in the comment section below.

Awab Alvi is a dentist in Karachi. He runs the blog Teeth Maestro.

I think that bin Laden’s death is good riddance, and I think many Pakistanis would agree with me. We are sick and tired of this war on terror business that has taken our country down the drain for too long. If his death can help us move on, then it’s for the best."

SAUDI ARABIA: “Many Saudis on Facebook have changed their profile pictures to bin Laden’s photo, as a sign of mourning”

I see Bin Laden and his followers as criminals, he deserved to be killed. He changed the face of Islam and the Arab world for the worst, and his remains should be thrown in the garbage.

Nevertheless, I know that not all in Saudi Arabia would agree with me. Some people see him as having done good for Islam, in the sense that he fought against infidels. This morning, I was surprised to see that many Saudis on Facebook changed their profile pictures to Bin Laden’s photo, as a sign of mourning. I completely disagree with them, but I don’t see the point of discussing the issue.”

IRAQ: “Some of my friends were killed by al Qaeda members. I was extremely happy when I heard the news”

Hussein Ali is a communications engineer in the northern Iraqi city of Kirkuk.

The people of Iraq have enormously suffered at the hands of al Qaeda terrorists. They were behind numerous attacks on civilian targets in the country, including young children in kindergartens. They beheaded anyone who didn’t follow their sectarian religious views – mainly Shiites, of course, but also Sunnis who didn’t accept their rules. Some of my friends were killed that way. I was extremely happy when I hear the news of bin Laden’s death this morning.

In the short term, I don’t think his death will weaken al Qaeda’s operations. On the contrary, there may be acts of revenge, which will as usual be directed against the easiest targets: defenceless civilians in politically unstable countries, like Iraq. In the long term, however, the struggle for his succession may divide al Qaeda leaders and make them fight each-other. Aside from being a symbolic blow, bin Laden’s death may also be the start of the group’s undoing.

AFGHANISTAN: “At least now the world can see that he wasn’t hiding in Afghanistan”

Yunos Bakhshi is the head of the Astronomy Association of Afghanistan. He lives in Kabul.

Afghan leaders have been saying for over ten years that bin Laden was not hiding in our country, and no-one believed us. His assassination in Pakistan is good news: at least now the world can see that he wasn’t hiding here. I would agree with those who say that bin Laden was at the root of many of the problems in the region, and I’m happy he has been killed.

On the other hand, bin Laden’s death alone won’t put an end to the war on terror. Most commentators on Afghan television are reminding us that he had stopped giving orders and directing terrorist attacks for several years, since he was forced into hiding. Recent terrorist attacks in Pakistan or Afghanistan were carried out by smaller terrorist groups or Islamist guerrillas, not al Qaeda. To fully eradicate terrorism in the region, the international community needs to step up pressure on Pakistan for it to purge its intelligence services of all those who support terrorism.” 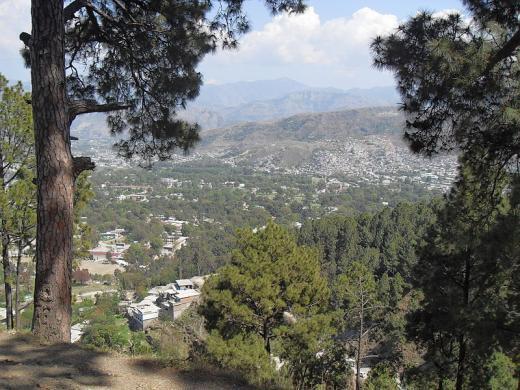 View of the Pakistani town of Abbottabad, northeast of Islamabad, where Osama bin Laden was located and killed. Photo posted on Wikipedia Commons.

PAKISTAN: “It’s just a publicity stunt, part of the political game between ISI and the CIA”

Raja Islam lives in Karachi. He is a CRM developer and photo-blogger.

Most people I’ve spoken to here don’t believe bin Laden is dead. His death has been falsely reported several times before, why should this time be different? I personally think this is just a publicity stunt on part of the US, part of the ongoing political game between ISI [the Pakistani intelligence services] and the CIA.

People are mainly concerned by the fact that US troops were allowed to lead a commando operation on Pakistani soil. This is unacceptable: such an operation should have been carried out by Pakistani forces. But it comes as no surprise: everyone knows that the monkeys leading our country are in bed with the Americans.”