Gas and fuel prices are so high in Uganda that many people can no longer afford to drive their cars or motorcycles to work. In solidarity, opposition leaders have announced they would also start walking to work every Monday and Thursday. Needless to say, their initiative has not gone down well with the authorities.

Opposition leader Kizza Besigye being dragged out of a roadside trench by police during a protest on April, 2011.Photo posted on Twitpic by @cdanny_ug.

Update on Monday, April 18: Opposition leader Kizza Besigye was once again arrested on Monday as he left home by foot to protest high food and fuel prices. Two other opposition leaders, Norbert Mao and Olara Otunnu, were also arrested.

Gas and fuel prices are so high in Uganda that many people can no longer afford to drive their cars or motorcycles to work. In solidarity, opposition leaders have announced they would also start walking to work every Monday and Thursday. Needless to say, their initiative has not gone down well with the authorities.

Uganda’s top opposition politician Kizza Besigye was shot in the right hand on Thursday, April 14, as he attempted to walk to work in the capital city of Kampala, drawing a crowd of several hundred opposition protesters. A spokeswoman for the Ugandan Red Cross, Catherine Ntabadde, said Besigye was hit by a rubber bullet that was fired by military police as they tried to disperse the crowd of supporters around him.

Besigye had already been arrested on Monday, along with several members of parliament, during a similar march. He was taken away again by police after being treated for his hand injury and charged with “inciting unrest”. He will appear in court on May 11.

Protests against high fuel and food prices took place in at least four other cities across Uganda. In the city of Mbarara, 300 km west of Kampala, motorcycle taxi drivers used their bikes to block the road. Police say the marches are illegal because they have not been approved by authorities, and warn they will arrest anyone who participates in future ‘Walk to Work’ marches.

Uganda is a landlocked sub-Saharan country in the Great Lakes region. Its president Yoweri Museveni, hailed as a standout African leader by the West but accused of corruption and authoritarianism by his critics, has been in power since 1986. He was re-elected in February 2011, in a poll Besigye and other opposition candidates say was rigged.

"A policeman fired a shot into the air, and suddenly there was a huge commotion"

John Njoroge is a journalist for the Daily Monitor, an independent Ugandan newspaper. He witnessed the unrest in Kampala on Thursday.

Besigye tried to conduct his marches in a non-violent manner. On Monday, after police blocked him from walking, he staged a sit-in, and was arrested on charges of ‘obstructing the street’. On Thursday when police blocked him again, he sat in a trench on the side of the road, arguing that this way he didn’t block any traffic. The trench was quickly surrounded by a huge crowd of supporters. Police tried to convince Besigye to leave, but he refused. 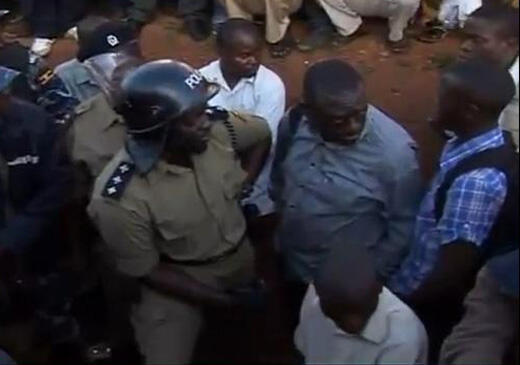 Besigye (centre) surrounded by police and supporters in a roadside trench in Kampala on Thursday, April 14. Screenshot of a video posted on YouTube by Ugandan001.

Things got out of hand at around 9 am. Without warning, a policeman fired a shot into the air, and suddenly there was a huge commotion. People were shouting and running, and there was tear gas everywhere. It’s hard to say whether the shot was fired by accident, whether the policeman fired deliberately to cause panic, or whether it was in fact a signal for the start of an assault. Protesters wrestled with police to try to stop them from arresting Besiegye, but they sprayed tear gas and water on him and dragged him out. Several dozen people [at least 30 according to some media reports] were injured either by tear gas canisters or rubber bullets, and more than a dozen people were arrested.” 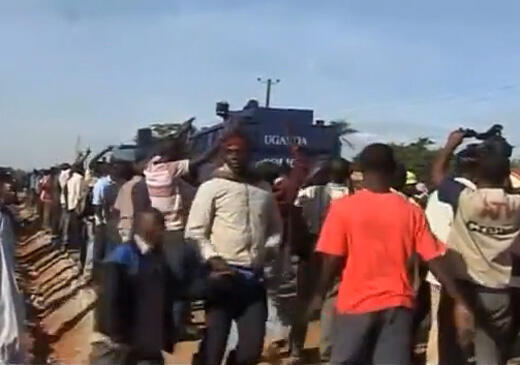 Protesters wave at a police vehicle driving past the trench where Besigye sits in protest. Screenshot of a video posted on YouTube by Ugandan001. 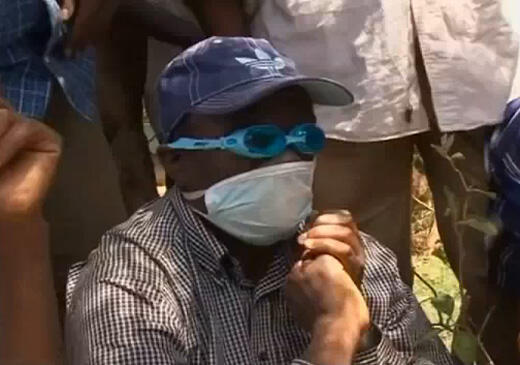 Besigye wearing Goggles and a face mask to protect himself against tear gas. Screenshot of a video posted on YouTube by Ugandan001.

Besigye's first attempt at walking to work on Monday, April 11. Video posted on YouTube by independentug.

Anna (not her real name) works for an Ugandan media monitoring and training centre in Kampala. She prefers to remain anonymous.

Musaveni has been regarded in the past as a progressive leader, but today I really wouldn’t say that’s the case. In fact, I think he’s no less than a dictator (and even his western allies today say so behind closed doors). Freedom of expression and freedom of the press are extremely limited: the fact that authorities aren’t allowing the walk-to-work marches to go ahead, and ordered national TV and radio station to stop their live coverage of them, is just one illustration of this.

There is growing discontent over the rampant corruption that exists among high-level officials. In that sense, the president is all talk and no action. He promises to remove ministers involved in corruption scandals, but in the end never does. Only recently, it was unveiled that high-level health officials had embezzled funds from a programme to distribute drugs to health centres in poor neighbourhoods. As usual, investigations are only targeting the little fish.

Today, however, it is economic concerns that have really brought discontent to a head. Average Ugandans, even those lucky enough to hold a regular corporate job in the city, are finding it increasingly difficult to meet rising food, fuel and commodity costs. When people see that one litre of fuel costs the double of what it did last year – and that even when global fuel prices stabilise, they don’t go down in the country – it makes them very angry.

The government is afraid the walk-to-work movement could turn into something bigger. That’s why it’s been blocking the marches and arresting opposition leaders. It’s true that the people of Uganda have been looking at events in Tunisia, Egypt and Libya very closely. The revolutions have given us a sense that no matter how strong a dictator is, the people have the power to overthrow him. Ugandans are starting to think that staying quiet is not their only option. The government has banned public TV channels from covering the unrest in the Arab world, so people in rural areas with limited access to Internet or satellite channels are less informed, but in the end the news ends up spreading anyway.” 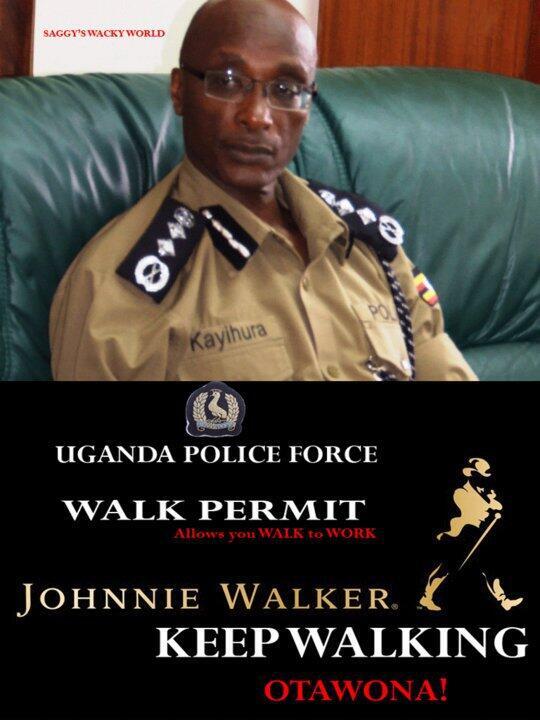 Spoof Ugandan police "walk permit", posted on Twitter by @3double8 with the caption "We're safe, because we have this".