Early this week, we received an extremely violent video from several Web users. It showed men being beaten with sticks and then burnt alive by the side of a road. According to the caption on YouTube, the video allegedly showed footage of a March 29 massacre in the western Ivorian town of Duékoué.

Early this week, we received an extremely violent video from several Web users. It showed men being beaten with sticks and the burnt alive by the side of a road. According to the caption on YouTube, the video allegedly showed footage of a March 29 massacre in the western Ivorian town of Duékoué.

We have chosen not to publish the footage due to its extremely violent nature. However, here is a screenshot of the page below.

In the light of past atrocities that have been committed in the Ivory Coast, such allegations initially appeared reasonable. On March 3, we published extracts from a video in which two men were burnt alive in the centre of Abidjan. This incident was verified by our journalists.

Furthermore, the International Committee of the Red Cross has confirmed that 'at least 800 people’ were killed in sectarian violence in Duékoué when forces loyal to internationally recognised Ivorian president Alassane Ouattara marched through on their way to Abidjan.

This video comes at a particularly crucial moment in the Ivory Coast, in which a longstanding post-electoral crisis between rival presidential contenders Laurent Gbagbo and Alassane Ouattara appears to be coming to a head. While there is documented evidence of the brutality committed by incumbent Gbagbo's supporters, there appeared to be little proof of excesses committed by pro-Ouattara forces. This video was presented by Gbagbo supporters as proof of the ‘genocide’ perpetrated by Ouattara’s followers, therefore supposedly showing that atrocities were committed by both sides.

The video is two years old

It turns out that this video was shot at least two years ago and was probably not taken in the Ivory Coast at all. FRANCE 24.com readers alerted us to the fact that the footage was posted in September 2009 on this blog, under the title ‘man-witches being burned alive in Kenya’.

The video was also posted on YouTube just over a month later, bearing a similar caption. There is no evidence to suggest that this dreadful scene actually took place in Kenya, let alone whether the victims are witches. What is certain, however, is given the dates on which they were posted, it is impossible that they be connected in any way to the recent massacre in Duékoué.

Are there lessons to be learned from this incident?  Firstly, that in time of war, misinformation tends to be rife. In the Ivory Coast's current situation, some Web users pursuing political agendas are deliberately trying to manipulate the media. More generally, this incident is a reminder that amateur content from the web must be treated with the utmost caution.

Besides the video above, we have also received by email a photo in which dozens of charred bodies can be seen with the caption claiming that it was taken in Duékoué on the March 29. This was widely redistributed through the Facebook pages of Laurent Gbagbo supporters. A FRANCE24.com reader informed us that this image is also very misleading. It had in fact already been published on this site, and several others, in June 2010. The photo was taken in the Democratic Republic of Congo following a tanker explosion. 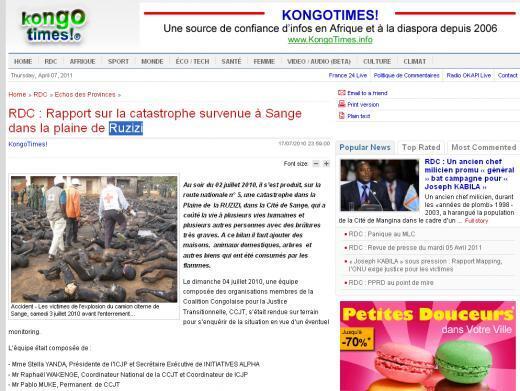