In Senegal, traditional fishermen struggle to meet fuel costs, and risk dying at sea if a dugout canoe motor breaks down. But a French maths teacher may have found a surprising solution: kites.

In Senegal, traditional fishermen struggle to meet fuel costs, and risk dying at sea if a dugout canoe motor breaks down. But a French maths teacher may have found a surprising solution: kites.

Stéphane Blanco is a 40-year-old maths teacher in Melle a village not far from the Atlantic coastal city of La Rochelle. He invented the “Volanz”, a “dynamic emergency boat-kite”. He grew up in Senegal, and has kept close ties with the country.

I’ve been working on the “Volanz” project for a little over ten years now. It was an uphill effort: I took a leave of absence for three years to create a prototype, test it, and launch a micro-company to market it. 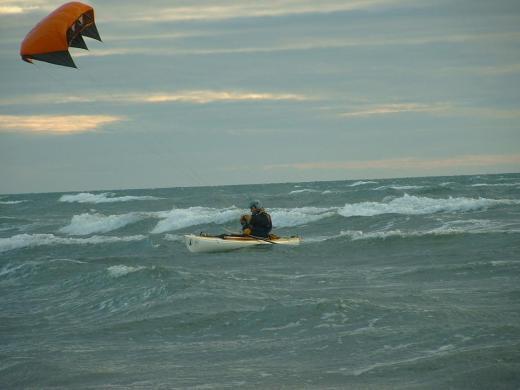 The kites came to public attention in 2009, when two participants of the trans-Atlantic Bouvet-Guyane rowing race successfully used them to pull their boats to shore after suffering technical problems. The kites are big and bright, and also make good distress signals.

Demonstration video showing how the kites can be deployed in case of emergency on professional racing rowboats. Since 2009, every boat in the Bouvet-Guyane rowing race has been equipped with Volanz kites. Video posted on YouTube by TheMantaVideo.

“I trained two Senegalese craftsmen to design and make the kites.”

After that, I approached the Senegalese fishing authorities, who expressed interest in equipping local fishermen’s boats with the kites. There are over 10,000 independent fishermen in Senegal – most of whom use small wooden dugout canoes with dilapidated motors - and each year an unknown number [up to 50 according to some estimates] die at sea because of motor failures. So I travelled to Senegal in February to train two local craftsmen, Badara “Badou” Tall and Babacar Fall, in designing and making the kites, and we tested the first two they produced with fishermen in Hann Bel-Air [a coastal district in the east of the capital Dakar]. 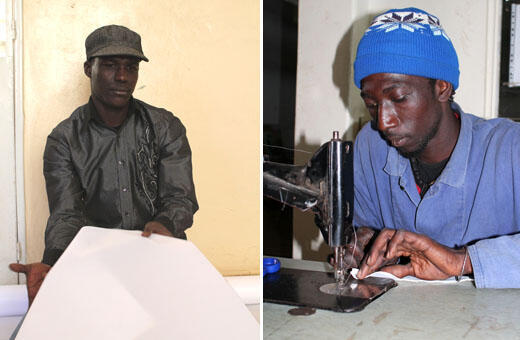 What is interesting, though, is that while I had initially designed “Volanz” kites for emergency use, the Senegalese fishermen I worked with quickly saw its fuel-saving potential. Petrol in Senegal costs as much as in France, while the average Senegalese fisherman earns much, much less than most French people. Official figures are hard to find, but one fisherman I spoke to told me that he can spend up to 10,000 CFA francs(15 euros) per day on gas, while on some days he’ll make only 1,500 CFA francs (2.2 euros) from the fish he sells. Most fishermen really struggle to make ends meet. If they use the kite to either go out to sea or return to shore --depending on which way the wind is blowing -- they can save up to 50% of fuel costs.

Fishermen queue up for petrol in the coastal village of Soumbédioune in March 2011. Petrol is expensive and rationed in Senegal, making saving fuel an important goal for local fishermen.

The kites are single-cord models that don't need to be piloted, which means that they can be used without any special training. They simply need to be attached to a sturdy point on the boat (in dugouts, the fishermen attach them to the front of the boat, and slip the cord under one of the benches to adapt their course). The kites usually take about eight seconds to deploy. A 6m2 "Volanz" can pull an 8-metre long dugout at a speed of 3 or 4 knots (5/8 km per hour), depending on the force of the wind.

“I want the kites to be a sustainable source of income for the workers who make them.”

Right now, we’re in a pilot phase of making and selling 100 kites to equip small Senegalese fishing boats. If that goes well, then I’ll return to Senegal to train more workers, and we’ll gradually launch a more wide-scale production. My partners (sponsors, Senegal’s Ministry of Fishing) and I have yet to determine at what price the kites should be marketed in Senegal. All I know is that I don’t want to start a low-cost operation: I want the kites to be a sustainable source of income for the local workers who make them, not mass-made and sold cheap by a major manufacturer.”

Fisherman holds on to a kite string. Photo: Rémy Frappas-Denis. 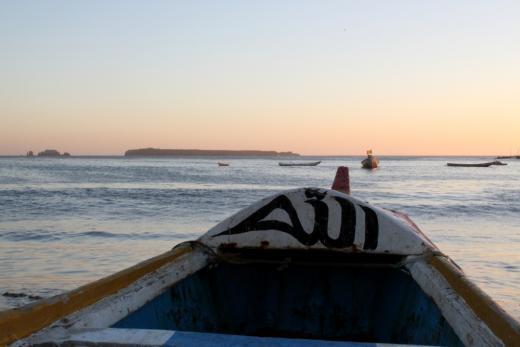 The word "Allah" is written in Arabic on the front of this dugout. Stéphane Blanco explains: "Some fisherman go out to sea not knowing if they'll have enough petrol to make it back. If their motor dies, all they have is Allah to protect them." 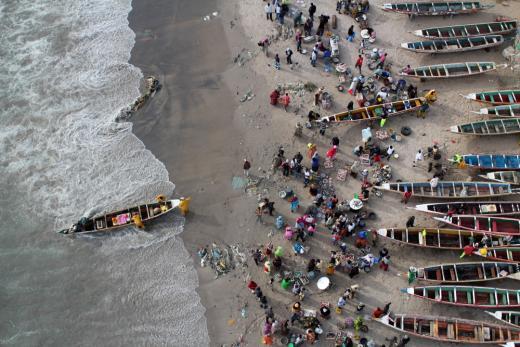 Aérial view of the fishing town of Soumbédioune. Photo by Stéphane Blanco, taken with a kite-camera.