Burkina Faso’s capital Ouagadougou was turned inside out on the night of Wednesday, March 23, when soldiers from two military camps went on a rampage to protest the conviction of five of their colleagues in a local “sex scandal”. A dozen people were injured.

Photo sent by one of our Observers and taken the morning of March 23 in a phone shop ransacked by soldiers.

Burkina Faso’s capital Ouagadougou was turned inside out on the night of Wednesday, March 23, when soldiers from two military camps went on a rampage to protest the conviction of five of their colleagues in what is being considered a local “sex scandal”. A dozen people were injured.

At 10 p.m. local time, a large group of armed soldiers from Sangoulé Lamizana base in Goughin (a neighbourhood in western Ouagadougou) joined soldiers from the Guillaume Ouédraogo camp in the city centre. They then proceeded to parade through the city, firing shots in the air and looting shops and gas stations. According to Burkina Faso’s national radio, protesting soldiers also showed up at the home of Yéro Boly, the minister of defence, where they caused “considerable damage”.

The Sangoulé Lamizana barracks contain a military prison, where five soldiers were detained in the wake of a recent sex scandal. A junior officer and four soldiers went on trial for mistreating a construction worker who had chatted up the wife of one of the soldiers. According to the newspaper El Faso, the unfortunate suitor was beaten up and forced to leave the soldier’s home naked on his scooter. He pressed charges, and on March 22 the soldiers were sentenced to from 15 to 18 months in prison as well as expelled from the army. But the five men were released on Thursday, after the show of  “armed solidarity” by their colleagues.

A computer shop looted and burned by the soldiers. Video sent by one of our Observers in Ouagadougou. 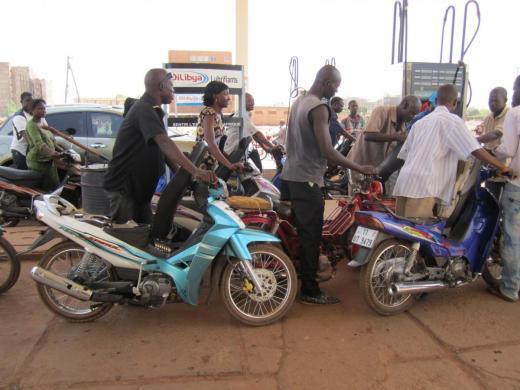 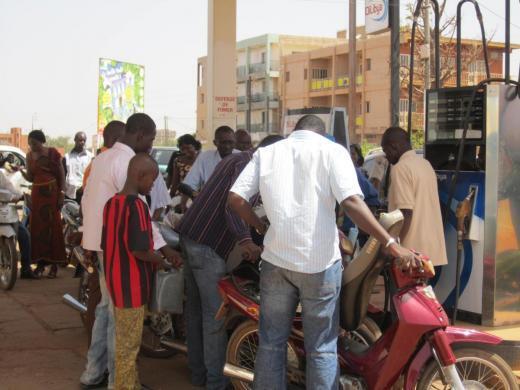 Queues in front of one of the only gas stations still open after the night of looting.Photos sent by one of our Observers in Ouagadougou.

Daniel, who requested to remain anonymous,  is a French citizen who has lived in Burkina Faso for 12 years. He saw the rioting soldiers pass in front of his house.

At about 10:30 p.m. on Tuesday night, I heard shots being fired just in front of the door. When I looked out of the window, I saw the tips of Kalashnikovs over my gate. The soldiers were firing into the air. It lasted all night, until sunrise at about 5:45 a.m. My security guard [in Burkina Faso, security guards protect many well-to-do homes] was bullied by them. Some armed men threatened him with a gun and told him “go inside and stay calm”.

Things calmed down at dawn. At about 8 a.m., I saw the soldiers head towards the city centre. Some shopkeepers tried to stop their progress by setting up roadblocks of burning tires. They were shouting: "Don’t attack us if you have problems with the law.” As I was leaving the house for work, I passed several hooded soldiers who had come with bags for looting. I realised that while some were protesting, others just wanted to let off steam, smash things up and fill their pockets.

This sex scandal is just a pretext for them to get rowdy. In Burkina, men in uniform benefit from a kind of impunity. This unrest that took place in the capital was the result of several months of underlying conflict between soldiers and civilians. You can sense that the general population is fed up. Demonstrations are highly restricted, and police constantly extort the population. For example, a friend of mine opened a restaurant. He paid all of the relevant taxes, but one night two men claiming to be tax inspectors came with four armed soldiers. They demanded that he pay a 'second tax' of 5,000 CFA francs (8 euros). Corruption is pervasive. If you are arrested for any offence, for 1,000 or 2,000 francs the charges are dropped. You are not told so directly, but you get the message. And it is five times more expensive if you are white.” 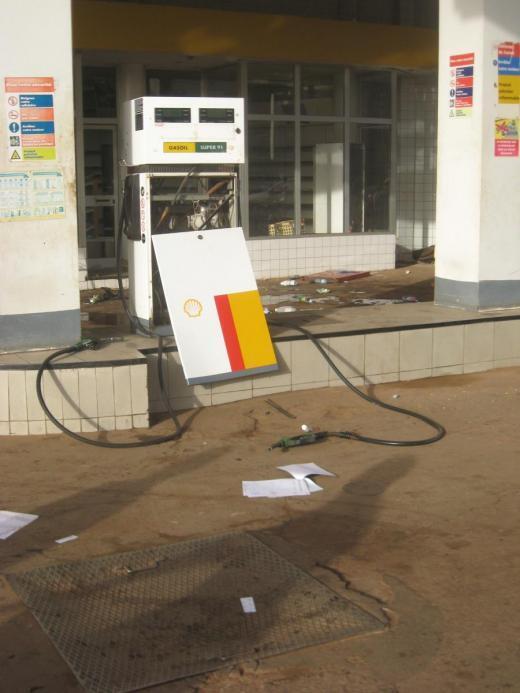 A gas station ravaged and looted by soldiers in Ouagadougou.