The view from Croatia: “Tunisia and Egypt have done it. Why not us?”

Every other evening for the past ten days, the streets of Croatia’s capital city Zagreb have been filled with a miscellaneous hodgepodge of several thousand citizens united around a single goal: getting rid of their corrupt government.

Every other evening for the past ten days, the streets of Croatia’s capital city Zagreb have been filled with a miscellaneous hodgepodge of several thousand citizens united around a single goal: getting rid of their corrupt government.

The protesters, loosely organised on Facebook and Twitter, are demanding the resignation of conservative Prime Minister Jadranka Kosor and her government, accusing them of corruption and of economic mismanagement. Kosor took over the helm of the government in 2009 when her predecessor Ivo Sanader, arrested on suspicion of corruption and abuse of power, stepped down.

Citizens are banned from protesting at Zagreb’s Markov Square, where both the parliament and the government headquarters are located. In a show of defiance, the protesters usually begin by gathering in front of the police blockade that cordons off the square, then march across the city, their numbers growing as people join them along the way.

On Tuesday, to mark International Women’s day, the protesters did not gather near the government seat as usual, but in front of the bankrupt textile company Kamensko, whose mainly female workforce recently went on a hunger strike in a bid to safeguard their jobs.

They later headed to the ruling Croatian Democratic Union (HDZ) party headquarters, chanting “Jadranka Go Away”, then marched to the seat of the main opposition Social Democrat party, chanting “We Don’t Want You Either”.

Croatia is a relatively young democracy. It held its first free elections in 1990, and declared independence from the (now ex) Republic of Yougoslavia in 1991, sparking a four-year war in the Balkans. The country was hard hit by the global economic crisis and has seen negative growth for the past two years. In 2010, it recorded its highest unemployment rate in eight years. The next general election is due in early 2012.

The FRANCE 24 Observers thanks Lamija Aleckovic for her help with this article.

Eva [not her real name] is a 24-year-old law student in Zagreb.

There are eight to ten thousand people out in the streets every two days, and we have only one thing in common: we want Prime Minister Jadranka Kosor to resign and we want elections NOW. Other than that, we have no demands.

Croatia is a country of 4.5 million people, of which nearly 350,000 are unemployed. Our economy is in ruins and our politicians are enormously rich people who have been sucking up the country’s wealth for the past 20 years. Our GDP per capita [11,284 euros , versus 33,249 euros in France] is a joke, and so is this country.

“Our leaders are living in a world of their own”

Kosor and her ruling party HDZ are living in a world of their own, where none of this is true. Every week we listen to her mumbling about Croatia being a great country with great potential that will soon be a member of the EU. We have been protesting for the past ten days, and so far our Prime Minister had said nothing on the topic, nothing. She is completely ignoring us. Would people anywhere tolerate that level of autism?

I want to stress one important thing about the nature of these protests. This is the first time that all people from all political groups are brought together in one protest. Left-wing or right-wing, nationalist or socialist, apolitical people, students, jobless people, pensioners. Literally everyone. We are absolutely aware of our differences while protesting and we have deliberately decided to ignore them for the time being to achieve a common goal - elections now. We do not represent the opposing parties, we do not represent anyone. We are the people. United people of Croatia. We have no protest leaders, we want none.” 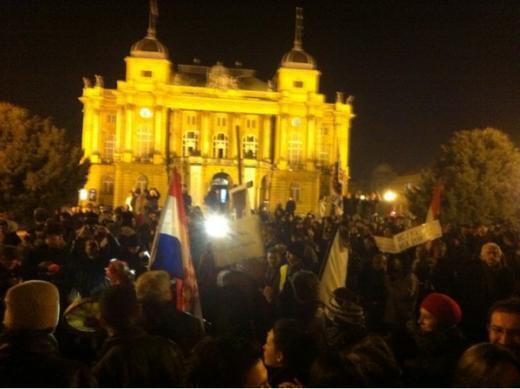 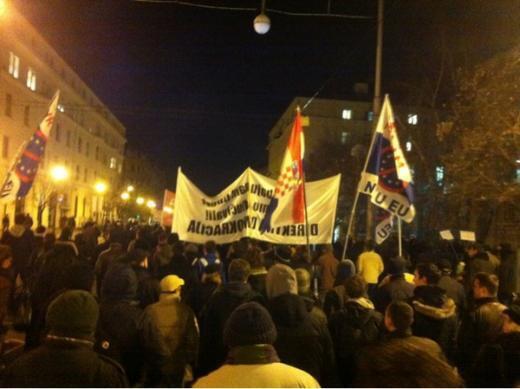 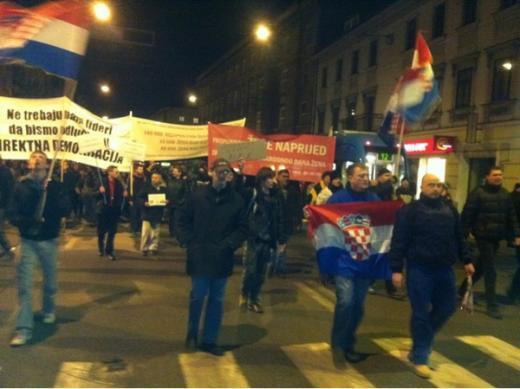 Anti-government protests in Zagreb on Tuesday, March 8, 2011. All photos posted on TwitPic by Marco Horvat.

“We want a change in the way the country is governed, with more transparency and accountability in the decision-making process”

Mario Bajkuša, 29, is a sociologist in Zagreb. He participated in recent protests.

Like thousands of other citizens, I have lost all confidence in the government. I feel it can no longer respond to our country’s needs and problems, in particular the high unemployment rate. We Croatians are tired of our voices never being taken into account.

The atmosphere in the protests is absolutely not violent. The protests take place in the evening after 6pm, so people come from the office after work, students come after school. Some people bring their families. There is no set itinerary, no organised leadership. Word is spread through Facebook and Twitter, and everything is quite spontaneous.

We want a change in the way the country is governed, with more transparency and accountability in the decision-making process. One example is Croatia’s candidacy to the European Union: our country is set to join the union in the near future, but not once have citizens been informed of what the EU’s conditions are and what membership will imply for us. Another example is a major labour law that was passed last year: over 700,000 citizens petitioned for a referendum on the law, but the government refused to hold one on grounds that it was too expensive.

The other big problem is unemployment. The Kamensko textile company is an important symbol in that sense: it shows everything that is wrong with the privatisation process in Croatia [since the end of Communist rule in the 1990s]. Strong, profitable companies were suddenly shut down after they were privatised, leading to tens of thousands of layoffs.

I believe the government needs to show protesters it is listening to what they have to say by organising early elections. Otherwise, my fear is that Croatia’s young, qualified professionals will grow bitter and frustrated, and choose to leave the country.”