French expats in Egypt: 'We’re staying, no matter what happens'

Some of the estimated 10,000 French expatriates currently living in Egypt chose to leave the country after the ongoing wave of anti-government protests took a violent turn. Others chose to stay.

Some of the estimated 10,000 French expatriates currently living in Egypt chose to leave the country after the ongoing wave of anti-government protests took a violent turn. Others chose to stay.

On Thursday, the French consulate in Egypt warned French expatriates and tourists to remain indoors and avoid travelling around the capital and other major cities. François Baroin, the French government spokesperson, recommended that all French citizens who “do not have a pressing need to travel to Egypt or remain in the country” to “return to France as soon as possible”. According to the foreign ministry, the majority of the 4,000 French tourists present in Egypt before the clashes have returned home safely.

In recent days, Western journalists covering the protests have been targeted by groups of armed thugs. According to the Paris-based NGO Reporters without Borders, the attacks were carried out by undercover police officers and supporters of President Hosni Mubarak. Egyptian state media, however, claim that the chaos that gripped Cairo on Wednesday and Thursday was “orchestrated by foreign elements”.

“I was deeply moved by what I saw in Tahrir Square”

Vincent Gainsbourg [pseudonym] is French. He lives in Dokki, a blue-collar neighbourhood in Cairo.

I lived in Egypt for several years when I was younger, and I loved the country so much that I decided to move back here permanently early January. At 65, I want to start a new life as a tour guide in Cairo.

I could have never guessed that a nationwide uprising would occur just weeks after my arrival. I saw Egyptians as resigned and afraid of change. More than half of the population is under 30, and has not known any other president than Mubarak. Nevertheless, they are the backbone of this uprising: it is youths who, more than anyone else, are shouting how sick they are of this stifling, conservative regime.

I joined the protests on Tahrir Square on Monday and Tuesday, and was deeply moved by what I saw. Such a huge mass of people was shouting in one voice what no-one had dared to say for decades. I was most struck by a young, unveiled girl with fire in her eyes, brandishing a sign that read just one word: "Leave". I never thought I’d see a woman do that in Egypt. It was very powerful. 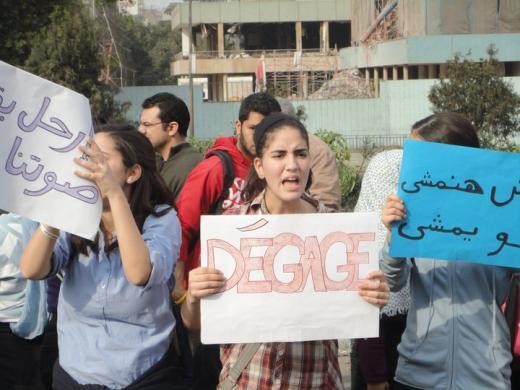 As I went home Tuesday night, I was aggressively stopped and searched by  neighbourhood militiamen, who obviously thought a Western person had no business “meddling” with Egyptian protests. We argued for a moment, but I’ve learned to keep my cool in moments like that and they eventually let me pass.

Since Wednesday, however, I have avoided going out in the street. Several friends warned me that armed men have been targeting westerners, and I’d rather be careful. But no matter what happens, I don’t want to leave the country.”

“We don’t go out any more; our local grocer delivers food to our home”

Maryvonne Lecalplain is a French citizen, but she has lived in Egypt for over 40 years.

I live in the neighbourhood of Mohanessin, in western Cairo, with my daughter and my two grand-daughters. We’re fine and safe, but we live in near seclusion. I haven’t been outside for days now, and my grand-daughters haven’t been able to go to school since last Friday.

Our local grocer delivers food to our home. He’s very sweet; he even said that if we ran out of money it didn’t matter. People here are incredibly nice; they always help each other out. When there were rumours that criminals had been freed from jail and were roaming the streets, people spontaneously organised into teams to take turns mounting guard.

I lived in Cairo during the Six-Day War in 1967 and the Kippour War in 1973. I have lived here longer than I have in France, and I don’t want to leave the country. As long as the embassy doesn’t order French residents to evacuate, I’m staying here.

“When you see how ordinary Egyptians live, you can’t help but be on their side”

All I want is for the people to make their voice heard. When you see how ordinary Egyptians live on a day to day basis, you can’t help but be on their side. Thirty years ago, life in Cairo was pleasant and easy, but things have grown much harder. For people like my cleaning lady, a loaf of bread is increasingly hard to find, and meat is an unaffordable luxury. Hospitals are in terrible condition. There’s a tiny group of people who keep getting richer, but the rest have absolutely nothing. That’s why people are no longer afraid to stand up to the regime: they have nothing to lose. The people of Egypt deserve an end to this crisis, fast.”