Tibet’s 'herbal viagra', worth its weight in gold

Some people will do anything to improve their sex lives. This includes, apparently, paying hundreds of euros for a handful of fungus-encrusted Tibetan worms.

Some people will do anything to improve their sex lives. That includes, apparently, paying hundreds of euros for a handful of fungus-encrusted Tibetan worms.

Tibet’s “herbal Viagra”is formed when a beige fungus, cordyceps sinensis, attacks the body of a moth larva that lives in the soil of Tibetan highlands, eventually killing and mummifying it. The sprouts that grow from it are collected on the Tibetan plateau each spring. Their name, Yarsagumba, roughly translates as “winter worm, summer plant”.

An ounce [27 grams] of Yarsagumba can sell for up to 800 dollars [590 euros] in New York Chinese herbalist stores – barely less than its weight in gold.

The yearly harvest is nearly the sole source of income for former Tibetan nomad populations forced to resettle in China’s Litang, Sichuan or Naqu counties. There are concerns that exploding demand will lead to overexploitation of the rare root and eventual exhaustion of supply, with serious consequences for local populations and ecosystems.

Dried Yarsagumba can be brewed in an anti-impotence tea or ground into a powder which, some retailers promise,  will add extra pep to your love life if  you sprinkle on your breakfast cereal every day. But our Observer, a Chinese herbal pharmacist, warns it’s not quite the miracle herb it is made out to be.

Yarsagumba, or Chongca in Chinese, has been harvested in Tibet for centuries and used in traditional Chinese medicine for a very long time. It spread to the Western world with the Chinese diaspora: in New York, the herb was always present in the historic Chinatown community, but very little known outside it.

Traditionally, in Chinese medicine, Yarsagumba is used to treat chronic ailments of the breathing system (such as asthma) and the kidney system. Because the latter is closely liked with functions responsible for reproduction and growth, it is also recommended to treat impotence.

Honestly, though, some of the wild claims you see from manufacturers who market the product have less to do with medicine than with folklore and just plain marketing. Yarsagumba is not herbal Viagra and shouldn’t be sold as such. Its benefits are real – no medicine is used for centuries if it doesn’t do at least some good – but like many ingredients of traditional Chinese medicine, its use can be distorted by unscrupulous practitioners. That’s why it’s so important to check the credentials of practitioners and herbalists before following their recommendations.

Over the last decade the cost of Yarsagumba has been blown completely out of proportion. My father, grandfather and great grandfather were herbal pharmacists before me, and I remember when I was a young boy, Yarsagumba sold for less than 10 dollars an ounce [7.3 euros] – which was already not that cheap.

“We direct customers interested in Yarsagumba towards cheaper products”

The problem is simply that of supply and demand. Natural, insect-germinated Yarsagumba cannot be industrially grown, and demand has exploded both in China and the West. A Chinese farmer or worker used not to be able to afford Yarsagumba even when it was cheap, but as Chinese household incomes grew, more and more people started buying it. In the early 1990s, the product’s notoriety grew when several top Chinese athletes said taking Yarsagumba helped their performance.

We do offer Yarsagumba, but usually if a customer walks in asking about it, we’ll direct them to other products that will maybe not have 100% the exact same benefits, but work well too, and are infinitely cheaper.” 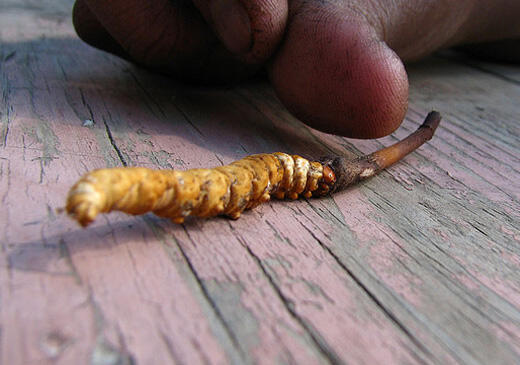 A dried Yarsagumba, with the fungus sprout coming out of the larva's head. Photo: Nicole Périat (www.iconico.net). 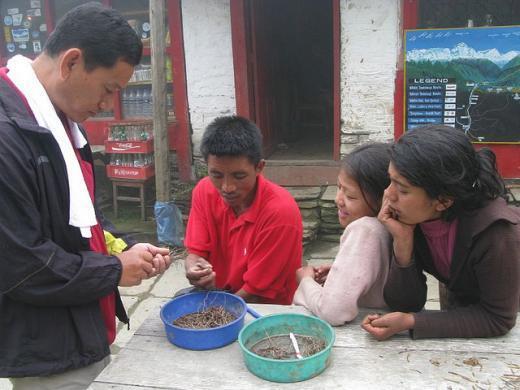 Yarsagumba vendors in a Tibetan town. Photo posted on Flickr by Rachel Steinfeld. 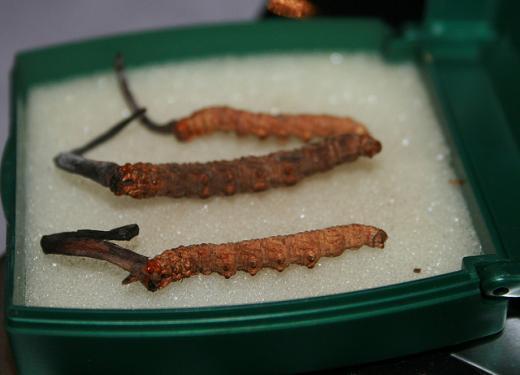