More than 40,000 people rallied in Pakistan’s southern city of Karachi on Sunday against the proposed reform of a blasphemy law that has deeply divided Pakistani society.

More than 40,000 people rallied in Pakistan’s southern city of Karachi on Sunday against the proposed reform of a blasphemy law that has deeply divided Pakistani society.

Controversy over the law flared in November when former information minister Sherry Rehman tabled an amendment calling for an end to the death penalty for blasphemy, after Christian mother-of-five Asia Bibi became the first woman sentenced to hanging for the offence.

On January 4, Punjab governor Salman Taseer was shot dead by a policeman assigned to his protection for his support of the proposed amendment. The governor’s outspoken liberal stance offended the country’s increasingly powerful religious base. Many in Sunday’s protest were waving banners in support of his murderer.

Sections relating to religious offences were added to the Pakistani Penal Code under former president Zia-ul Haq's Islamisation drive in the 1980s. In 1986 directly insulting the person of the prophet was declared a criminal offence to be punished with death or life imprisonment.

Photos of the December 9 protests in Karachi 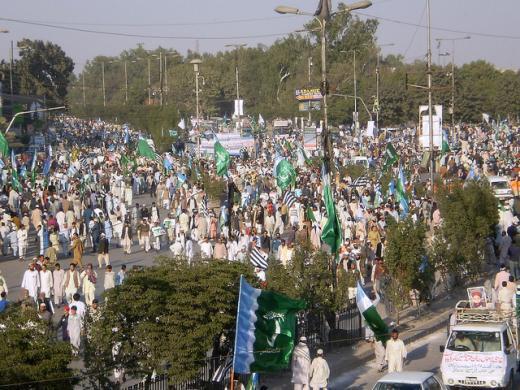 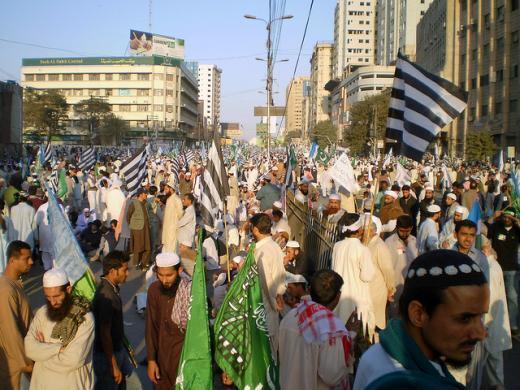 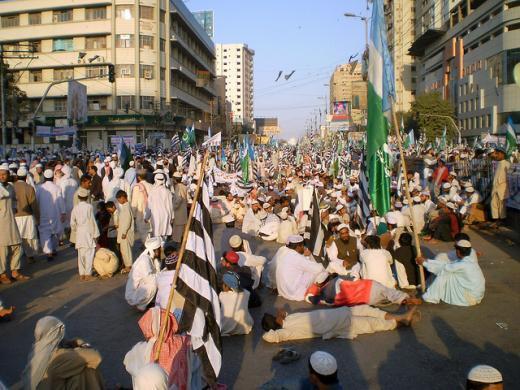 All photos posted on Flickr by Zaban E. Khalaq.

"Our blasphemy law is absolutely essential and should not be amended"

Raja Islam lives in Karachi. He is a CRM developer and photo-blogger.

I’m not an overly religious guy: I wear jeans, I go to parties, I don’t have a beard… Yet I think our blasphemy law is absolutely essential and does not need to be amended. It touches on a fundamental principle of Islam, which is the oneness of Allah and our Prophet. Insulting the prophet is the most serious offence one can commit against a Muslim, and according to the Pakistani constitution, the punishment for this is clear: death by hanging.

I can safely say that the majority of Pakistanis are in favour of the blasphemy law, and would be outraged if it were changed in any way. In Karachi, where I live, there are banners and signs supporting the law everywhere, and the protest yesterday blocked large segments of the city. If the government does change the law, people will inevitably think that it is ceding to pressure from America or the West. That could cause anger, even violence.

I have friends who think Salman Taseer’s murder was justified and support his killer. I’d say Pakistani society is pretty much divided in half on this issue. Personally, although I did not agree with the governor’s stance, I don’t think people should take the law into their own hands.

However I understand public anger against him. He said some terrible things; he called our blasphemy law a “black law”. He also said people were using it for their own purpose, in a corrupt way, which is not true – or at least not more true than any other law in Pakistan. If you’re going to change one law, change them all, then!”

Rizwan is a planning and performance management analyst in Karachi.

The problem with the blasphemy law is not the law itself, but its implementation. The way it is enforced is completely subjective. There are many different currents of Islam in Pakistan, and different people feel differently about what is or is not insulting to the Prophet and our religion. Right now it’s too easy for anyone to accuse someone else of committing blasphemy – and the consequences of the accusation are much too serious. I do not think it is justified to sentence someone to death for committing blasphemy.

Unfortunately, those who feel strongest about blasphemy are also those who tend to take the law into their own hands. You are more likely, if you commit blasphemy in Pakistan, to be shot or lynched by an angry mob than to face trial.

“If your name happens to be Mohammed, does that mean you can accuse anyone who insults you of committing blasphemy?”

What is to prevent a comedian of being accused of blasphemy for making fun of Islamist fundamentalists in a skit? Or, if your name happens to be Mohammed, does that mean you can accuse anyone who insults you of committing blasphemy (as was the case for a pharmaceutical salesman whose middle name is Mohammed, who pressed charges against a doctor who dared throw out his visitor’s card)?

All governor Salman Taseer was suggesting, when he proposed that the blasphemy law be amended, was that there be a counter-punishment for the accuser in case the allegations proved unfounded. That way, it would avoid people making false accusations.

The governor only pointed out things many liberal Pakistanis say in private, but because he was a well-known public figure, he paid for it with his life. His death goes to show that the subject of blasphemy is absolutely not up for debate in Pakistan."