Floods in Guadeloupe: “The weather alerts were all wrong!”

The people of Guadeloupe are used to heavy tropical rainfall, so why did the flash floods on January 4 take the island by surprise?

A flooded road in Saint-François. Photo by  Isabelle Brasching.

The people of Guadeloupe are used to heavy tropical rainfall, yet the flash floods on January 4 took the island by surprise.

Five people were killed in the town of Les Abymes on Tuesday after a pick-up truck attempted to cross a flooded bridge and was swept away by the overflowing river waters.

According to deputy-mayor Eric Jalton, the car’s driver “imprudently” decided to cross the bridge, which was covered in a strong torrent of water, “despite the repeated warnings of local residents and onlookers”. But many locals think that people would have been more cautious had official alerts concerning flood risks been issued on time.

Jérémy Edouard is a journalist at Radio Martinique. He was on vacation in Saint-François, a beach town in the east of Guadeloupe, when the floods hit.

It started raining hard on Sunday evening, and didn’t stop for three full days. Sudden, torrential rains are not unusual in Guadeloupe (although it’s not yet the rainy season), but their length and intensity took everyone by surprise, including weather forecasters. For hours you could barely see through the curtains of thick, heavy drops, and the sky was dark grey.

The weather alerts that were issued were all wrong. Météo France [the national weather service in France and French overseas territories] belatedly raised the alert level to orange [the second highest level] in the early hours of Wednesday, at a time when the rains were finally beginning to abate. I’m looking out of my window right now [at 7:15 am local time, GMT -4] and there are even some patches of blue in the sky.

“Until late Tuesday, nobody quite realised that the rising water levels were that serious”

The main mistake was not issuing a yellow [intermediate risk] alert on Monday. Météo France itself has recognised that it underestimated the level of rainfall there would be in the night between Monday and Tuesday. People in the Caribbean pay attention to the alert levels – we have to, to be prepared for seasonal hurricanes and cyclones. I’m sure islanders would have gone out less, and taken less risks driving on flooded roads, if an official alert had been issued.

In fact, until late Tuesday, nobody quite realised that the rising water levels were that serious. Saint-François was not the hardest hit town: only one road, which was under one meter of water, was closed, It was only on Tuesday evening, when we heard on the news that four people had drowned in the town of Les Abymes, that we realised the floods were more dangerous than anticipated. And indeed, until late at night, tourists who had been trapped in flooded-up parts of the island began arriving at the hotel. They had gone to beaches or other towns that are normally a 45-minute drive away, and ended up being blocked in traffic on water-logged roads for 5 or 6 hours. If there had been an alert, the hotel would have warned tourists not to drive around the island.” 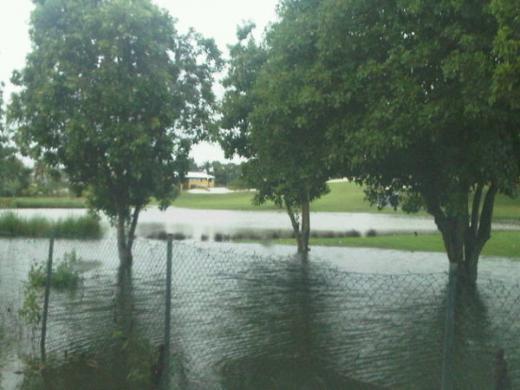 The flooded golf of Saint-François. 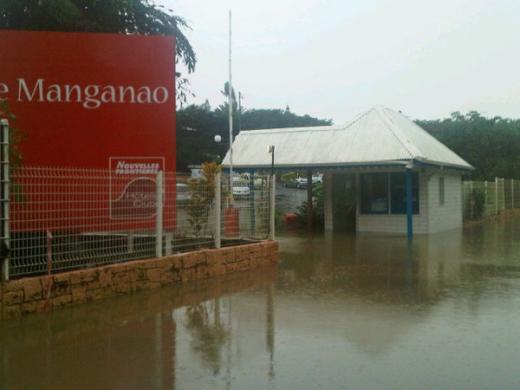 Tourists in this resort were unable to leave the premises for 24 hours. Photos by Jérémy Edouard.