Artists and free speech advocates are up in arms in the United States since the Los Angeles Museum of Contemporary art (MOCA) commissioned a mural by Italian street artist Blu – then deleted it before it was showed to the public.

Artists and free speech advocates are up in arms in the United States since the Los Angeles Museum of Contemporary art (MOCA) commissioned a mural by Italian street artist Blu – then deleted it before it was showed to the public.

Blu was invited by MOCA director Jeffrey Deitch to contribute an outdoor mural to the museum’s upcoming “Art in the Street” show. The artist flew to Los Angeles in early December to paint the mural, an anti-war statement depicting rows of coffins draped in dollar bills instead of US flags.  He was nearly done when the director, discovering the mural for the first time upon his return from the Miami Art Fair, ordered its immediate removal. The museum issued a statement explaining that the decision was prompted by concern that the mural’s imagery could offend the museum’s neighbours, a war veteran’s hospital and a memorial to Japanese American soldiers.

An incensed Blu blasted the decision on his blog, indicating that he would not accept the museum’s invitation to paint a new mural over the erased one. He wryly commented on the “rhetoric debate” raging online as to whether the decision was “censorship” or a “curatorial choice”: “In fact,” he wrote, “it is a curatorial choice that involves the censorship of a mural.”

Deitch has deflected the accusation, arguing that he did not receive a proposal from the artist before he started the work. “I have supported protest art more than just about any other mainstream gallery in the country,” he told the Los Angeles Times. “But as a steward of a public institution, I have to balance a different set of priorities – standing up for artists and also considering the sensitivities of the community.”

"To keep their doors open, museums like MOCA need to appease powerful donors"

Marc Schiller is a New York-based artist and CEO of Electric Artists, Inc, a digital brand management agency. He and his wife Sara co-founded the Wooster Collective, a website that showcases new artwork and artists.

The reality is that fewer and fewer museums live up to our ideals. To keep their doors open, museums like MOCA need to appease powerful donors and mount shows that are commercial and bring in the masses. It's becoming rarer and rarer for museums to mount truly provocative shows that challenge us and change the course of our society. Certainly the removal of Blu's wall doesn't signal that the MOCA show will be very daring and provocative.

Our hope is that the final outcome from all of the discussion this month about Blu, Deitch, MOCA and censorship is that it will become a clear catalyst for curators and artists to be even more daring with their work and its message in private shows, knowing now that this cannot be the case in public institutions.” 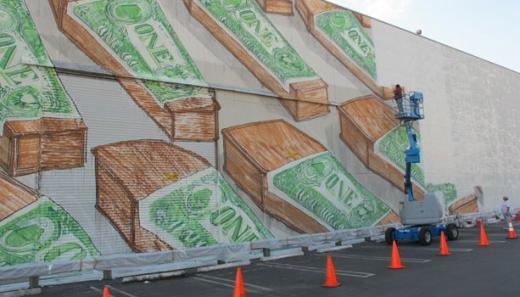 An anonymous L.A. street artist painted this mural depicting MOCA director Jeffrey Deicht dressed as an ayatollah and holding a paint roller with whitewash paint. Behind him is a corner of Blu's mural. Photo posted on Flickr by Joey Z1. 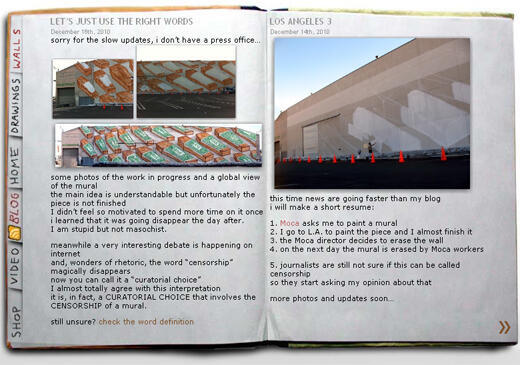 Screenshot of Blu's blog post reacting to the museum's decision to remove the mural. 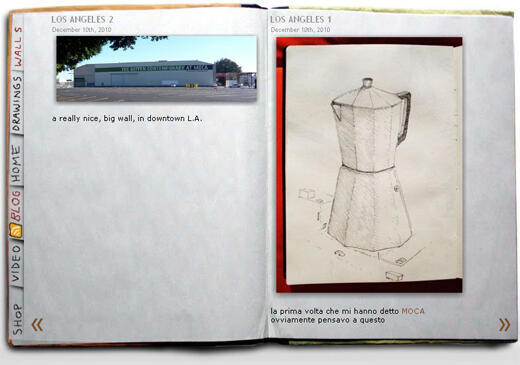 Screenshot of Blu's blog before beginning the mural. In his characteristically cryptic humour, he posted a sketch depicting MOCA as a giant coffee pot, with a caption in Italian reading: "The first time someone mentioned MOCA, of course I thought of this."