Six months after France stepped up measures to expel Roma gypsies from the country, new makeshift shacks have emerged on the sites of their dismantled camps. Despite the cold, most families living in these slums refuse to go to emergency accommodation centres. They fear their homes will once again be razed while they are away.

All photos by Trésor Kibangula.

Six months after France stepped up measures to expel Roma gypsies from the country, new makeshift shacks have emerged on the sites of their dismantled camps. Despite the cold, most families living in these slums refuse to go to emergency accommodation centres. They fear their homes will be razed while they are away.

At La Friche, an illegal camp not far from the northern city of Lille which has already seen several evictions, 19 families are battling against the cold. They live in caravans and shacks on scrubland set aside for horses between the communes of Hellemmes and Villeneuve d’Ascq.

When France declared it had entered level 3 of the winter ‘Extreme Cold’ accommodation plan, the city council requisitioned a gym in which the Roma could be sheltered. But the inhabitants of La Friche rarely go there. They say they are frightened by reports of an illegal registration system at the entrance of the centre. And for our Observers, the fear that the camp will be destroyed once again is more compelling than the need to escape the cold.

Article written in collaboration with Paul Larrouturou, journalist at France 24.

Video uploaded on the blog "An African in the North" of Trésor Kibangula.

Yan Lafolie is a student at the École nationale supérieure d’architecture et de paysage [National School of Architecture and Landscaping]. He is a member of the NGO  "L’Atelier Solidaire" [Solidarity Workshop], which builds free cabins for Roma families.

The Roma are settled on the wasteland called La Friche just opposite my university. They were driven out last winter for a fourth time and, as usual, they came back. However, their explusion was really traumatic. Everyone was expelled at 6 in the morning, including pregnant women and children. When they got back to the camp, everything had been destroyed and all of their possessions had been smashed up by the bulldozers. Despite that, two months later, they were back. In the month of August, a couple of them were expelled again, but they too have returned since. 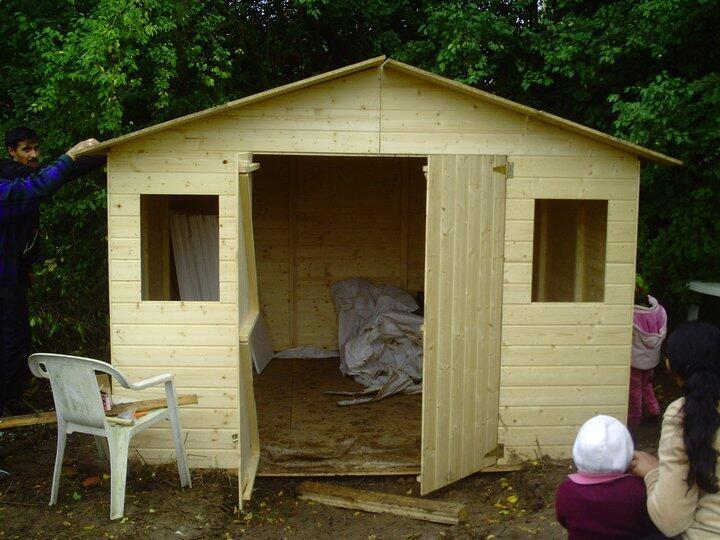 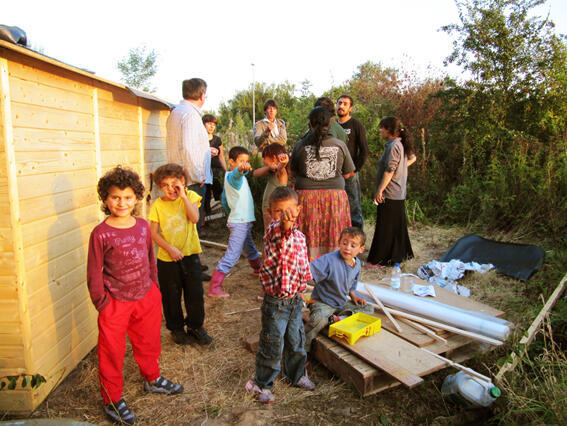 To help them, between September and October we constructed five cabins, thanks to materials donated by Father Arthur [who made headlines this summer when he wished in public that Nicolas Sarkozy would have a heart attack. He has since apologised.] We did it on a shoestring using salvaged materials. We tried to insulate them as well as we could and we installed dry toilets with wood shavings. However, all the while we were aware that this would be just a small band aid on the policy of Sarkozy.

This may seem incomprehensible to some that they refuse to go to the emergency accommodation centres which the council has opened. Yet they do not want to sleep on camp beds among foreginers. And above all they are scared that they will be robbed or that their camp will be destroyed in their absence. They would prefer to sleep in the cold than have to respond to indiscreet questions from the police and to be put on file. Or if they do stay in the gym set aside for the winter accommodation scheme, they do so only when it is extremely cold and they return at dawn.

It is important to realise that the Roma only work in a limited number of professions, for example, boiler making. In the winter months they make frying pans with iron drums. They then make a hole in the roof to allow the smoke to escape and they burn the wood from the surronding trees. The problem is that they run out of wood and burn whatever they can get their hands on. That becomes toxic for the children and dangerous.

"Stop lumping the two together"

When you see all of this misery, these little slums where the rats scurry through due to the rubbish, that spreads fear. You get the impression that you are no longer in France. People think that they are dirty, but it is the fact that the council refuses to give them bins. Nor are they lazy, but there is an employer's tax of 900 euros due to their Romanian nationality. I am not evangelizing and I know that there are a few who chose a life of crime. But we have to stop lumping the two together. The vast majority are not dishonnest, they are just victims of a high level of precarity."