Killed for smoking a joint on his scooter

On Sept. 11, Fodail Aberkane, 37, was arrested for consumption of cannabis. He was released, but several days later he returned to the police station to attempt to recover his scooter and his mobile phone, both of which had been confiscated.

A demonstration on Friday, Sept. 24, in front of Salé’s police headquarters denouncing the death of Fodail Aberkane and demanding that his torturers be taken to court.

On Sept. 11, Fodail Aberkane, 37, was arrested for consumption of cannabis. He was released, but several days later he returned to the police station to attempt to recover his scooter and his mobile phone, both of which had been confiscated.

Police officers reportedly refused to return them, at which point, according to sources close to Fodail, the man lost his temper and raised his voice at the policemen. His brother, who had accompanied him, was then thrown out of the Central Police Station of Hay Salam, while Fodail remained inside.

On Sept. 15, Fodail was brought, already in bad shape, before the public prosecutor for “verbal assault of an officer in the exercise of his duty”. He was then remanded in custody. Two days later, on Sept. 17, Fodail left the Salé prison and was taken to a hospital in Rabat. He could hardly move, but before he died he was able to give the names of the two police officers who had allegedly tortured him.

The funeral of Fodail Aberkane gave rise to a spontaneous demonstration calling for those responsible for his death to be punished and demanding an end to the “hogra”, a term used to describe the powerful's lack of regard for the weak. 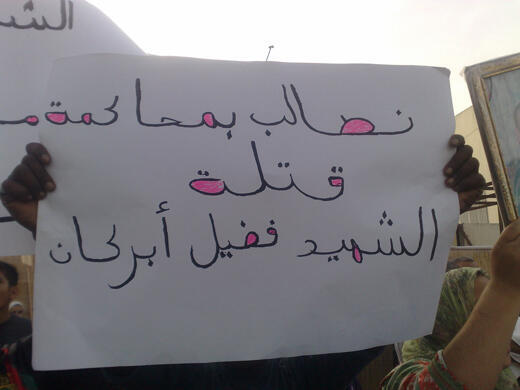 "We demand a trial for the killers of martyr Fodail Aberkane"

A man addresses the crowd gathered spontaneously at the funeral of Fodail Aberkane. 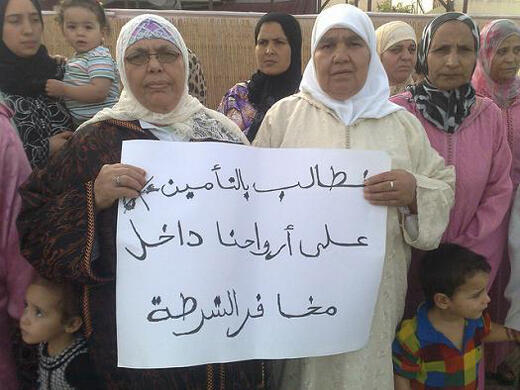 Two mothers from Hay al-Inbiaat with a placard: “Protect our children from being killed in police stations”

Demonstrators shout "Impunity is the law of the jungle". 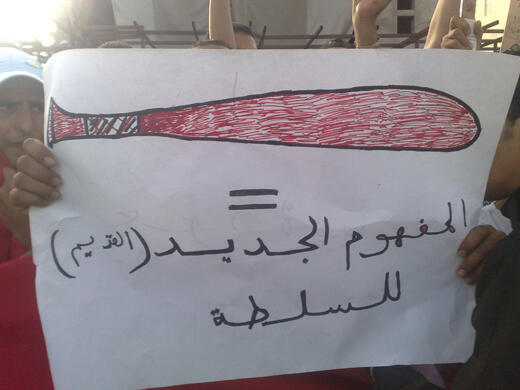 "(The truncheon) = New (and old) definition of power".

Video extracts from the YouTube channel of Apousto and photos from the Flickr album of Nizar Bennamate. Thanks to Larbi Eh for his help.

Nizar Bennamate is a journalism student. He took part in the demonstration in Salé on September 24.

A Moroccan citizen died recently for smoking a joint on his scooter! And sadly this is not the first time. According to the Moroccan Association for Human Rights (AMDH), Fodail Aberkane is the ninth person tortured to death by the Salé police since 2001.

The problem is that Moroccan laws are so hazy that we can make them say whatever we want. Bureaucratic sleight of hand was used to prevent him from getting his scooter and mobile phone back. Fodail lost his cool. The forensic report states in black and white that he was tortured, and that he died from several blows to the head.

The real problem is that we cannot say this too loudly in the Moroccan media. We can write about it a little in the press, but both the public and private audiovisual media, which reach the widest audience, will not let themselves be used to denounce a crime. We often talk about the freedom that we’ve had in Morocco since the ascension of Mohammed VI. Yet this liberty, if it really exists, began in the last years of the reign of Hassan II. And this freedom is relative: the constitution of the country, for example, has not changed by so much as a comma.

In the case of Fodail Aberkane, the most heart-warming thing is that people came to demonstrate, spontaneously and in great numbers. We are now waiting for the response of the public prosecutor. Is he going to bring a case against the torturers? For the moment, it’s radio silence."