If you thought polo was a snobby, white collar sport that involved cleaning up considerable amounts of horse manure after games, think again. Bike polo brings a modern, urban twist to its equestrian counterpart.

If you thought polo was a snobby, white collar sport that involved cleaning up considerable amounts of horse manure after games, think again. Bike polo brings a modern, urban twist to its equestrian counterpart.

Previously unknown in France, bike polo has in the past two years attracted a small but devoted following of players and fans across the country. Initially intended as an alternative to equestrian polo for working class populations who couldn't afford to keep a horse, the sport has moved from grass fields to cement courts, attracting a hipper, younger crowd.

On September 18, a group of French players staged a demonstration in front of the Paris Hôtel de Ville, the historic city hall, to mark the city's official "Bike and Electric Transport Day". Their goal: to increase their sport's visibility and finally obtain a safe playing ground of their own. 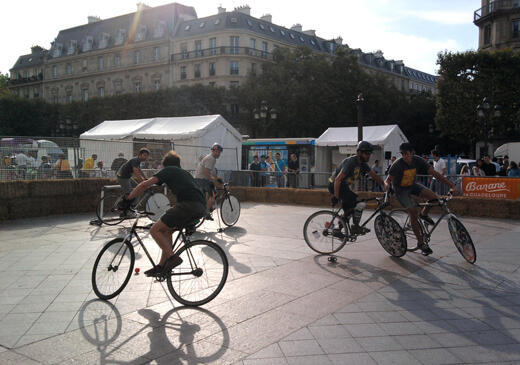 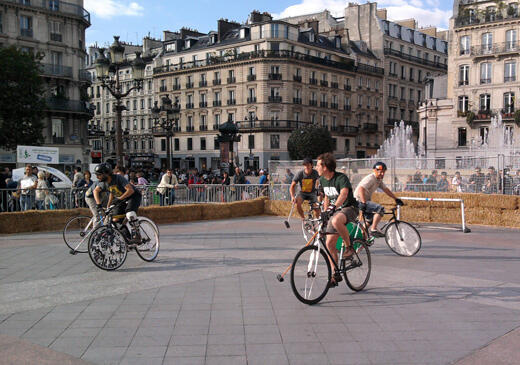 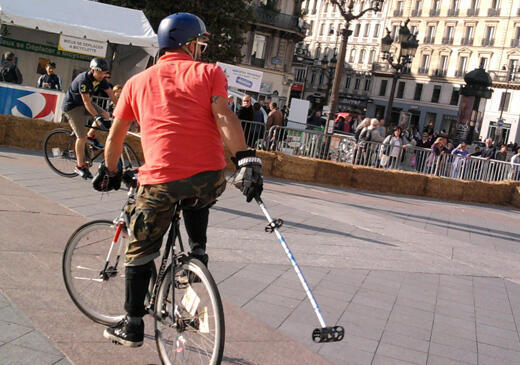 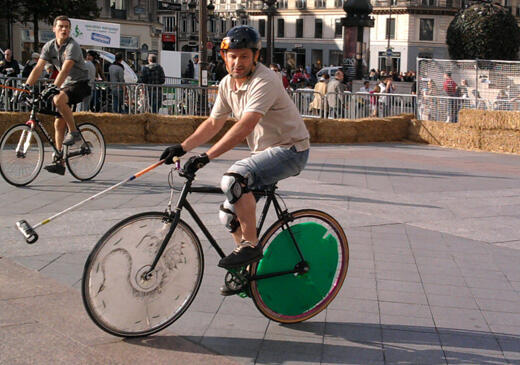 Photos of the bike polo demonstration on September 18 in front of the Paris city hall. All photos sent by Mathilde Benassaya.

Highlights from the 2006 international bike polo on grass tournament in Dublin. Posted on YouTube by Francine Flower.

"I hope our demonstration caught the eye of city officials"

Mickael Vieira, 25, is a landscape gardener in Paris. He's a member of a bike polo team called Sporting Club Paris.

I started playing bike polo a little over a year ago, mainly because I was into fixed gear bicycles [a bike that has no freewheel, which allows the cyclist to stop without using a break, and also to ride in reverse], the kind used in this urban sport.

Bike polo was born in the UK in the early 20th century as the "poor man's" version of polo on horseback, which was mainly reserved for the aristocracy. It was played on grassy fields similar to those of traditional polo. I play hard court bike polo, which is a urban, underground variant that appeared in the United States about 10 years ago.

The main rules of bike polo are simple: two teams of three players have ten minutes to get a small red ball into a goal basket on their side of the court. They use their mallets to whack the ball around and pass it to each other. It seems basic, but it's also very technical: players move fast and can't ever let their feet touch the ground. The game requires speed, balance, and a good aim."

I hope that the sport will one day be recognised in France like it is in the US or the UK.We don't even have access to a practice ground in Paris anymore! We used to play in a skate park under the Stalingrad metro station [in the north of Paris], which was good because it had light and a roof. But the city has decided to turn the park into two basketball courts, which are too small for us to play in. We need a new field that has public lighting [otherwise it's too dangerous to play after nightfall] and is somewhat cordoned off. We've organised ourselves into an association to enable us file official requests for a public practice ground. I hope the demonstration we did on Saturday in front of the Hôtel de Ville caught the eye of some city officials!