The shantytown where fridges are recycled into kitchenware

The shantytown of Agbogbloshie, in the suburb of Accra, is used as an international dump for all kinds of electrical equipment. Our Observer followed a group of immigrants from Togo who make their living by recycling old refrigerators. Read more...

The shantytown of Agbogbloshie, in the suburb of Accra, is used as an international dump for all kinds of electrical equipment. Our Observer followed a group of immigrants from Togo who make their living by recycling old refrigerators.

Ghana has become one of the world’s main receivers of e-waste (electronic waste). Every month, hundreds of tonnes of equipment arrive in the waste reception centre at Agbogbloshie.

"With a fridge, they make between 8 and 10 dishes"

Jean-Michel Rousset has made a number of short trips to Ghana since 1985 and currently lives in France. He took these photos in August, whilst he was working in the suburb of Accra.

Walking through the shantytown of Agbogbloshie, I heard a huge din coming from the end of an alleyway. It was like an orchestra of hammers. I followed the sound and discovered an atelier. Around fifteen people were in the process of re-working an old sheet of metal and so I went to ask them some questions.

This is how I leant that they were all originally from the region of Fazao, in Togo. They fled their country and settled in the shantytown of Agbogbloshie, a place that has been made famous by the activities which revolve around the electronic and electrical waste that comes from Europe and/or Africa. We hear a lot about the recycling of computers, but these people specialise in refrigerators.

The system works as follows. Young scrap metal workers, who are called “the scrap boys”, spend their days patrolling the streets of Accra, looking for electronic equipment. They then transport it, most often on foot, to the shantytown. They keep the compressors that contain copper – the most expensive metal – and then sell on the rest for around 15 Ghanaian credis (8 Euros) per fridge. 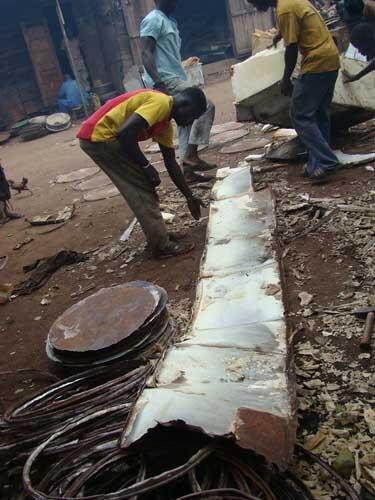 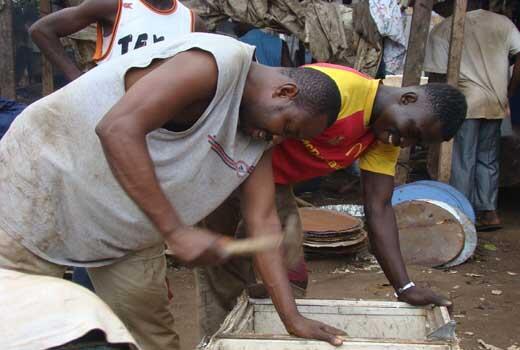 The Togolese then begin to work on the carcasses of the fridges. They transport everything to their atelier, where they take the appliances apart, pulling out the isothermal foam and then cutting up the metal sheets into circles that they then hammer for hours. Using this metal, they make either dishes for cooking or basins, called “head pans”, that construction workers put on their heads to transport concrete. With one fridge, they make between 8 and 10 dishes and sell them on for between 5 and 6 cedis each (about 3 Euros). They told me they are the only people in Accra who make these products, and they manage to make a modest living out if them. 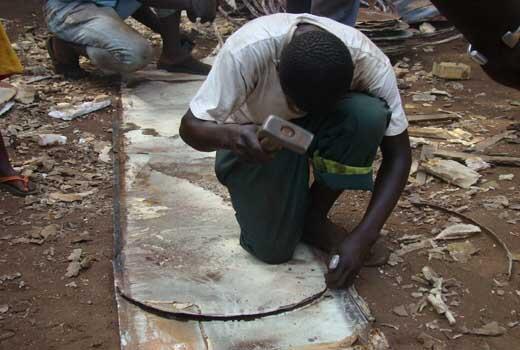 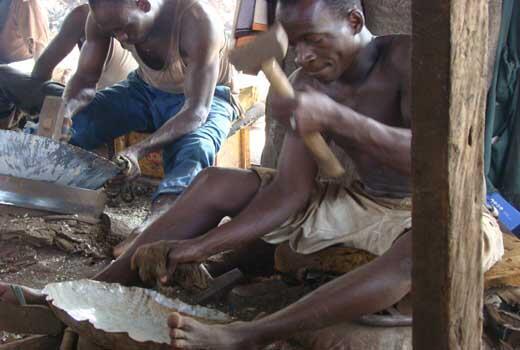 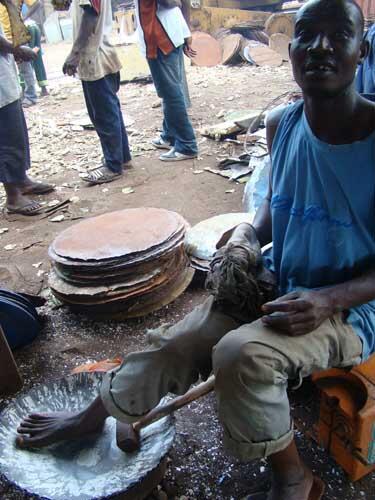 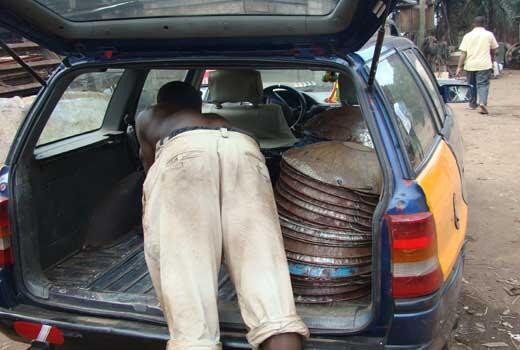 All these photos were taken by Jean-Michel Rousset, in August 2010.