There are the serious sporting events... and then there is Russia's Bubble Baba Challenge. The annual race sees hundreds of competitors hurl themselves across river rapids riding inflatable sex dolls. Read more and see the photos...

There are the serious sporting events... and then there is Russia's Bubble Baba Challenge. The annual race sees hundreds of competitors hurl themselves across river rapids riding inflatable sex dolls.

Over 500 people participated in the eighth annual Bubble Baba race on August 31. The increasingly popular event takes place on the Vuoksa River's Losevo Rapids, about 40km from St. Petersburg. Men and women both take part, with a separate heat for women-only races. No special qualification is required other than being over 16, a decent swimmer, and sober (participants are tested before the race).

Organiser Dmitry Bulawinov came up with the idea of the race as joke at a party where the men got rather drunk after the women failed to show up. The event, which operates under the motto "A Rubber Babe is more than just a Vehicle", has maintained its raunchy, light-hearted spirit, with riders giving their props names like "Floating Piggy" or "Unstoppable Chick". "Baba" means "peasant woman" in Russian, but also has sexual connotations.

The race was won by St. Petersburg man Vladislav Pavlenko who rode his doll, dubbed "Vanilla Pelotki," to the finish line in two minutes and 47 seconds.

"It was an unforgettable sight"

Andrew is an IT programmer and amateur filmmaker from Moscow. He attended this year's Bubble Baba race for the first time.

I was travelling to Saint Petersburg from Moscow with friends, and we stopped at the Bubble Baba race on the way because we knew one of the organisers. One of my girlfriends participated, but I stayed ashore to film the event.

Most of the props were woman-shaped inflatable dolls, because the event is sponsored by a sex shop that donated a truck full of them. Large inflatable animals and giant penises were also allowed. It's really an unforgettable sight, all those bodies, real or inflatable, splashing into the water at once. It's one big joke. Everyone is there to have fun, there's a very good atmosphere. I didn't expect there to be so many woman participants, but there were!

There were 7 or 8 heats in all, with about 40 participants per heat. The racers have to cover a distance of about 100 meters in very strong currents - it's not easy! A lot of people, including my friend, missed the finishing point and were eliminated. The water is freezing, and participants are given a shot of alcohol (whisky or vodka) to warm up when they come out of the water. No one was drunk, though, that's not allowed. The participants are given a wetsuit and life-vest (which are mandatory), and some wore helmets. I don't think the race is actually dangerous, though. No-one has ever gotten hurt, to my knowledge."

Photos of the Bubble Buba Challenge 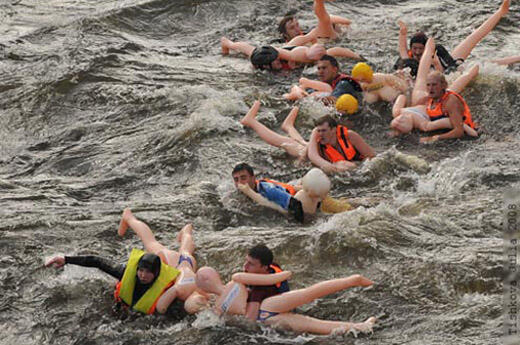 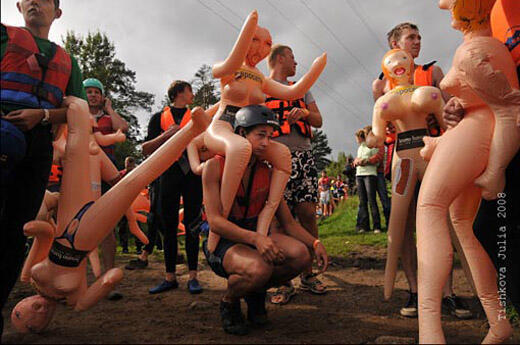 Photos of the 2008 edition of the Bubble Baba challenge, posted by Pulostovine on Flickr. 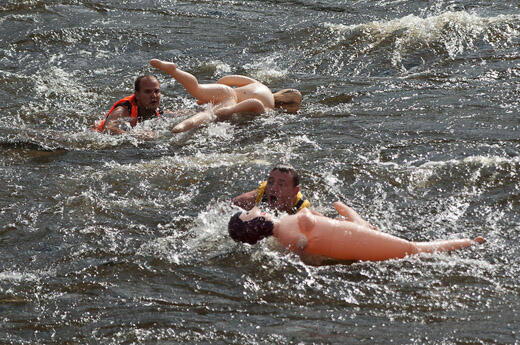 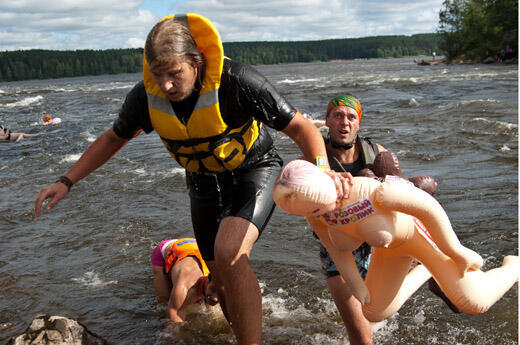 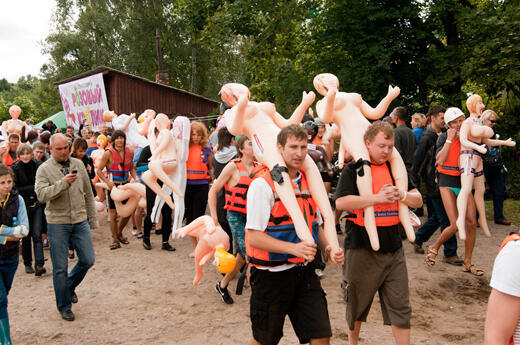 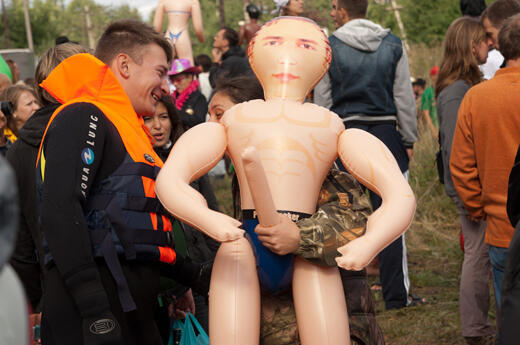 Photos of the 2010 edition of the Bubble Baba Challenge, posted by Amel_true on Flickr.