Bloody protests against soaring living costs: 'It’s a struggle just to get by'

Protests against the rising costs of food, fuel and water have turned ugly in Maputo, the capital of Mozambique. Seven people have reportedly been killed and scores more have been wounded in clashes with police. We spoke to an Observer in Maputo, who brought us this account. Read more...

Photo sent by Fernando Regulez to Medicos Mundi, posted on Flickr on September 2, 2010.

Protests against the rising costs of food, fuel and water have turned ugly in Maputo, the capital of Mozambique. Seven people have reportedly been killed and scores more have been wounded in clashes with police. We spoke to an Observer in Maputo, who brought us this account.

Mozambique, one of the world’s poorest countries, was left devastated by the 16-year civil war that ravaged the country between 1976 and 1992. It relies heavily on imported goods, mostly from South Africa. But surging prices on the global food market (the UN Food and Agriculture Organisation reported on Wednesday that its global food price index shot up 5% between July and August) have made even the most basic necessities hard to afford for many Mozambicans. In 2008, the country experienced a first wave of "hunger riots", which left six dead. 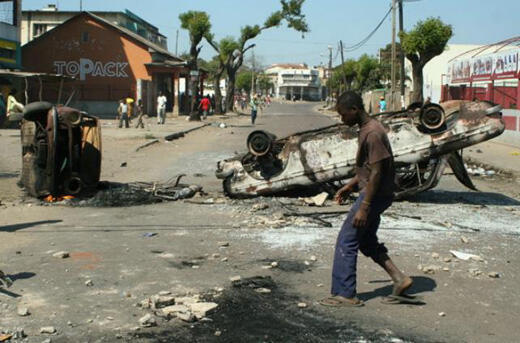 Photo sent by  Fernando Regulez to Medicos Mundi, posted on Flickr on Septmeber 2, 2010. 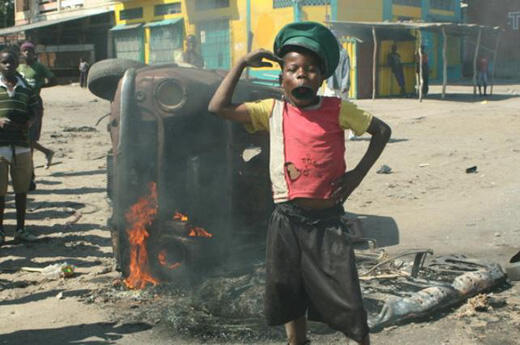 Photo sent by  Fernando Regulez to Medicos Mundi, posted on Flickr on September 2, 2010.

Patrick Munyaneza is a graduate student and financial management teacher in Maputo. Born in Rwanda, he has lived in Mozambique for 15 years.

Yesterday people went out in the street and set up barricades. Slum dwellers tried to come down to the city centre, but were kept out by the police. The entire city is devastated: banks were destroyed, shops looted. When authorities intervened they shot live rounds of bullets at the crowd. The city feels like a war zone. There aren’t very many policemen, and they’re having a lot of trouble controlling the situation.

The protests are going on today. We’re blocked at home, it’s impossible to go outside. We can’t buy anything: all the shops are closed, as well as banks and other administrations. Phone lines disrupted. I hear regular gunshots outside my window.

The situation reminds me of the hunger riots in 2008, which occurred for the same reasons. The difference is that those only lasted for a day. These have gone one for two days already, and things don’t look like they are calming down. An SMS had been circulating among Mozambicans for the past four days, calling on people to go out in the streets on September 1. It says the protests will go on until Friday. I don’t know who sent the original message. That’s the problem with this revolt: it’s not organised. We’re missing someone who can speak in the name of the people.

Inflation is a major problem in Mozambique: it affects every product. It’s becoming a struggle just to get by for most people. Six months ago, 25 kg of rice cost 500 metical [11€], now it’s nearly 1000 meticais [21€]. When you know that the minimum wage is just 1,300 meticais [28 euros], you can see what the problem is. Petrol prices have been raised three times in the past six months.

People are very angry. When the government announced two weeks ago that the cost of bread and public transportation would rise on September 1, it was the final straw for most people.

The government is doing nothing to help. Our president made a statement yesterday, but in substance said nothing: he just described the situation. There was an emergency government meeting today, but we haven’t heard anything from them yet."" 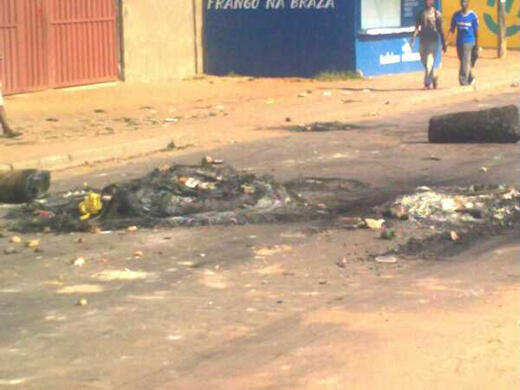 Burnt tires in the streets of Maputo. Photo published on Facebook by Patrick Munyaneza. 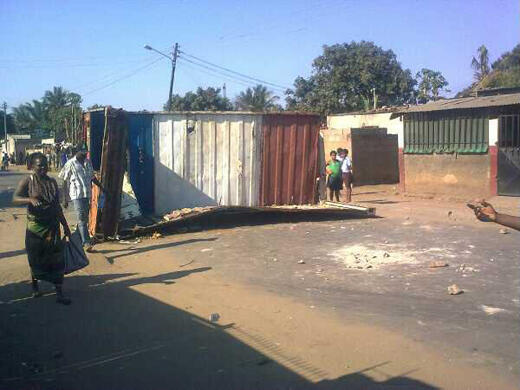 A barricade. Photo published on Facebook by Patrick Munyaneza.