Police look on as mob beats teenagers to death

A video showing a furious mob beating two teenagers to death and then hanging them has sparked a wave of outrage in Pakistan. One of our Observers in the country tells us that 15 policemen were present in the crowd when the lynching took place.

A video showing a furious mob beating two teenagers to death and then hanging them has sparked a wave of outrage in Pakistan. One of our Observers in the country tells us that 15 policemen were present in the crowd when the lynching took place.

FRANCE 24 has chosen not to publish the amateur footage of these very violent scenes, which has been posted on Youtube.

Tahir Imran Mian is a journalist in Islamabad. He founded a Facebook group and organised a demonstration on August 25 in Islamabad to call for those responsible for the lynching to be brought to justice.

I went to the location where the lynching took place and spoke to locals, rescue workers and a cousin of the two boys who were beaten to death. Several versions of the story are going around on the Internet, but according to the different witnesses I spoke to, this is what happened:

"It all started with a stupid argument between local youths"

The two brothers, Mughees Butt, 19, and Muneeb Butt, 15, lived in Sialkot [in the north-east of Pakistan.] The week before the lynching took place, they went to a suburb of their town called Buttar, intending to play cricket there. Once on the field, they argued with a gang of local youths who wouldn’t let them play. A fight broke out, and Mughees and Muneeb left.

On August 15, the boys returned to the cricket field on Buttar. They were on their way back home, on bicycle, when everything began. They saw a crowd gathered in Buttar, and stopped to find out what was going on. The townspeople were very angry because a robbery had just taken place and the thugs had seriously injured a villager. At that point, one of the youths Mughees and Muneeb had argued with on the cricket field noticed the two brothers and singled them out as friends of the robbers. Although this was completely untrue, it was all it took for the crowd to unleash its anger on the two boys.

The police intervened. And at this point, there are conflicting versions to the story: the official version is that the crowd overpowered the policemen and snatched back the boys. However, eyewitnesses at the scene told me a different story: the police themselves reportedly returned the boys to the crowd after tying up their hands and feet.

"At the end, the boy was begging to be finished off"

After that, Mughees and Muneeb were horribly beaten and stoned. The amateur video shows it clearly: the crowd began by beating them with sticks, then threw stones at them. The younger one died within minutes, but the older brother’s ordeal lasted over one and a half hours. In the end, witnesses say he was begging to be finished off to stop the pain. When the two boys were hung by their feet to a pole, just minutes away from the police station, Mughees was apparently still alive. Then the two brother’s lifeless bodies were paraded around the neighbourhood on a tractor. Amateur footage of the scene shows that policemen were part of the procession.

I created a Facebook group demanding that the Buttar’s chief of police, Waqar Chouhan, be be tried for murder, and the regional police chief Zulfiqar Cheema be tried for manslaughter. Cheema is known to have encouraged extra-judicial executions in the past. For now, the 15 police officers present at the scene have simply been suspended and charged with ‘gross negligence’, which is punished by two years in prison at most. Some were arrested, but they either escaped with the help of their colleagues within the force, or were freed on bail.

On August 25, 500 people gathered in front of the press club of Islamabad to call for justice for Mughees and Muneeb. The Facebook group I created was joined by over 20,000 people in a few days. But I’m not expecting any miracles: what we say probably won’t change a thing.

Screenshots of the amateur footage of the scene

A policeman briefly tries to intervene.

Women and children participated in the beating.

The young men end up hung by their feet, just a few steps away from the police station. 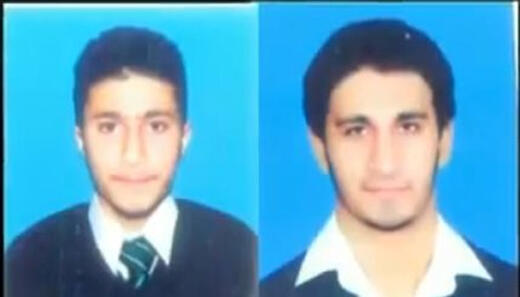