Corruption in Russia represents 50% of the country’s GDP, according to a study published on August 16 by the national Human Rights lawyers association. Our Observers in Russia tell us that paying bribes for nearly everything is part of their daily lives.

Corruption in Russia represents 50% of the country’s GDP, according to a study published on August 16 by the national Human Rights lawyers association. Our Observers in Russia tell us that paying bribes for nearly everything is part of their daily lives.

The Russian Human Rights association based its conclusions on official statistics as well as on more than 6,000 interviews. The average bribe in Russia has more than doubled since January, reaching 44,000 roubles (1,500 euros). However, to get a job in the police force or to become a state prosecutor costs a lot more.

In 2005, Transparency International already warned that Russia was following in the footsteps of Nigeria, Azerbaijan or Libya: oil rich, but steeped in corruption. The country ranks 146th out of 180 (with 1st being the least corrupt) in a list published by the organisation. Russia has the same position as Cameroon, while the Ivory Coast comes in at 154th and Pakistan 139th.

Lyudmila Alexeyeva is a Human Rights activist in Russia. She contributed to our previous article on a Russian policeman who spoke out against corruption.

Prosecutors in the province of Sverdlov complained about the pressure they were under from some of their colleagues in various eviction cases. We won that case: a corrupt Prosecutor was tried and suspended.

In another case, this time in the province of Perm, a police officer was sentenced to eight years in jail for accepting a bribe to allow an oil deal to go ahead. However, the policeman had been blackmailed and pressured into accepting it by false accusations that he had stolen barrels of petrol. We were able to intervene on his behalf thanks to an eyewitness who knew the truth and could support the policeman's story. His testimony could have gotten him into trouble, but he and his family decided to run that risk.

Another example: in the province of Amur, a State judge was pressured into finding a man guilty who he knew was innocent (he actually knew who was really guilty of the crime). He refused and was suspended. His superiors even pressed charges against him and placed him on a list of wanted people. Thanks to our intervention, charges against the judge were eventually dropped."

Olga Shmukler, 22, is a Russian student. She studies economics in Paris.

Paying a bribe is the quickest and easiest thing to do if you get stopped for a traffic violation: most policemen accept the money as it saves on paperwork and time. The going rate is spread by word of mouth: everyone knows, for example, that a speeding offense can by paid off with a bribe of 500 roubles [12 euros], while the fine costs 1,000 roubles."

Evgeniy Shmukler is a blogger and photographer in Moscow.

Students often get into college by paying off professors. The standard rate for an 'A' grade for an an exam is 3,000 roubles [76 euros]. Teacher’s salaries are so low that it’s no surprise they accept extra pocket money.

If a museum is closed, you can usually still get in if you pay staff a backhander. A bribe of 100,000 roubles [2,500 euros] is a must to get your baby into a good nursery. If a worker comes to do repairs at your house, you pay him the official rate, then slip him a bit more to be sure the job is done well.

Doctors put up a sign in their offices – this is a typically Russian tradition – saying “I don’t live off flowers and candy”, which means that they’d prefer gifts of vodka, or cognac, for example. The sign is meant as a joke, of course, but there’s a dash of truth in it. Doctors are poorly paid as well – a good bribe will get you special care.

Medvedev has repeatedly said that fighting corruption is one of his main priorities, but I don’t think he’s strong enough to end a centuries-old practice that’s deeply ingrained in Russian society. To solve the problem, we should start by affording workers better salaries.” " 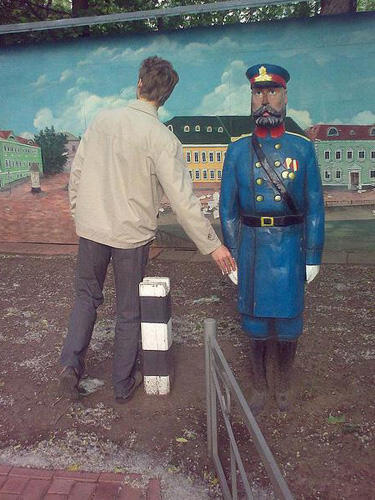