Hidden away in a corner of north-west Romania lies the Merry Cemetery of Sapanţa, where hundreds of blue crosses decorated with intricate patterns and vivid colours tell the story of the villagers buried there. Read more...

Hidden away in a corner of north-west Romania lies the Merry Cemetery of Sapanţa, where hundreds of blue crosses decorated with intricate patterns and vivid colours tell the story of the villagers buried there.

For over fifty years the poeple of Sapanţa, a village of 3,000 inhabitants located a few kilometres from the Ukrainian border, have laid their dead to rest in a colourful cemetery that now attracts thousands of tourists each year. The richly decorated graves, complete with hand-painted pictures of the deceased and epitaphs they wrote prior to their death, offer a humorous and often ironic look at their lives.

Local artist Stan Ioan Patraş began painting the crosses after  World War II, and soon they became a tradition in this village in Maramureş, the region of Romania often described as "the last medieval rural area of Europe" because of its wooden houses and ox-driven carriages.

All photos were posted by Andrés Bermúdez Liévano on Flickr. 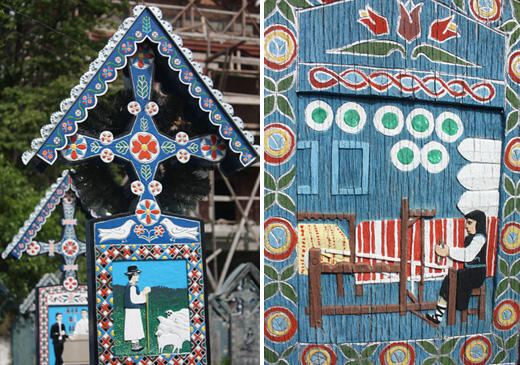 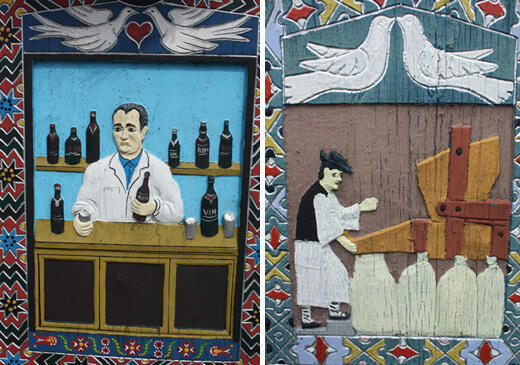 An apothecary and a farm labourer.

Sanda Golopenţia, a Romanian folklore researcher, has visited the Merry Cemetery many times since the 1960s. She teaches at Brown University, in the US.

I visited the Merry Cemetery for the first time during the 1960s, while collecting folk tales in the region, and was amazed by what I saw. By that time the cemetery was already well known, but folklorists were a bit cautious because they didn't know how to interpret it. It took them years to recognise its global folkloric nature.

By combining elements of Maramureş folklore -such as the motifs sculpted by men the wooden gates or the patterns used by local women in weaving- with his own inspiration, Stan Ioan Patraş came up with a unique creation. His idea was to make death something that could be faced more easily, by showing what had been beautiful and happy in people's lives.

Soon Patraş added portraits of the deceased to the crosses, imitating urban cemeteries where people's photos were placed on their tombs. But instead of traditional portraits, he painted them in an activity that gave sense to their lives: herding cattle, cooking, praying, drinking with friends... Sometimes the defining moment for a person was the way they died, and the crosses came to represent various kinds of accidents.

Short epitaphs reconstructing the life of the dead appeared then. These playful texts written in the first person also evoke special moments of people's lives, with lines like "What I liked most was to cook turkey soup" or "I liked to drink - maybe sometimes too much". The town deacon would keep track of what people wanted written on their crosses, and as soon as something important happened they would go back to him and have their epitaph updated.

At one point Patraş had so much work that he couldn't do it alone anymore. After his death in 1977, his pupils took up the task. At least four or five of them are active today, including one who takes care of his house -- now a museum.

The cemetery continues to evolve though. New artists have brought new motifs, new shades of colour to the crosses. It also reflects the transformations that have taken place in Maramureş: there are crosses for people who died in the war or in collective farms and disappeared in political prisons during Communist times. They now speak about issues such as the migration of people to Western Europe, like one that remembers a young man who died in the Paris metro in 2007.

The painted crosses create sort of a second village in Sapanţa: one for the living and one for the dead, just as loquacious and friendly as the first one." 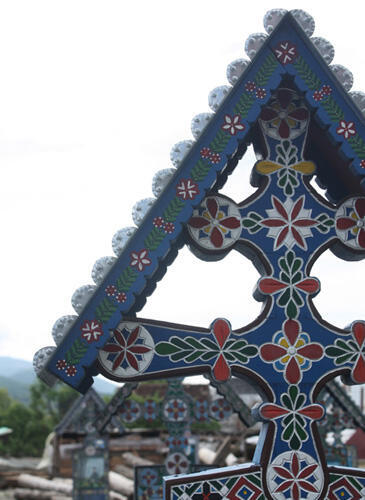 Detail of a cross 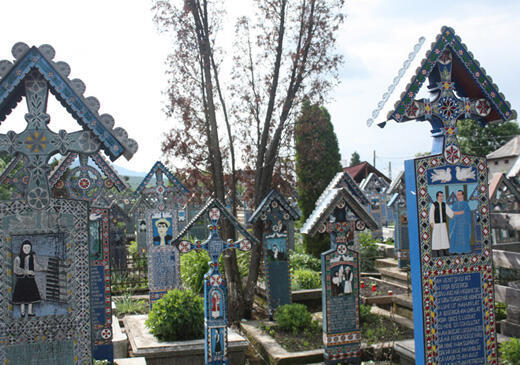 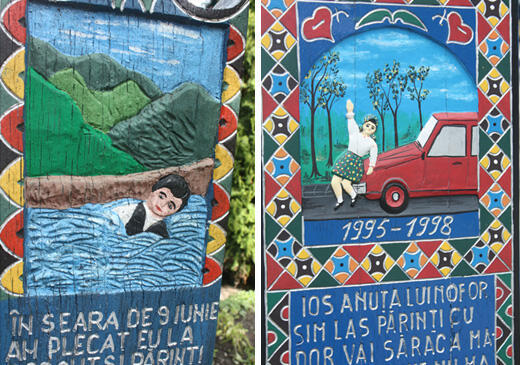 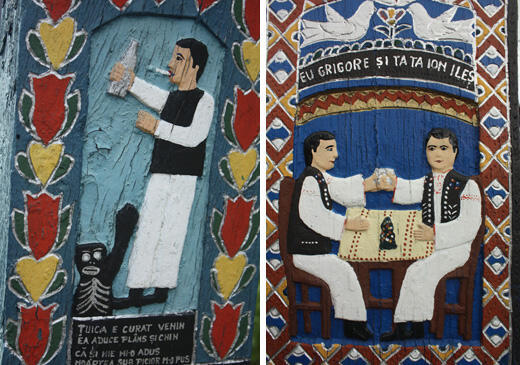 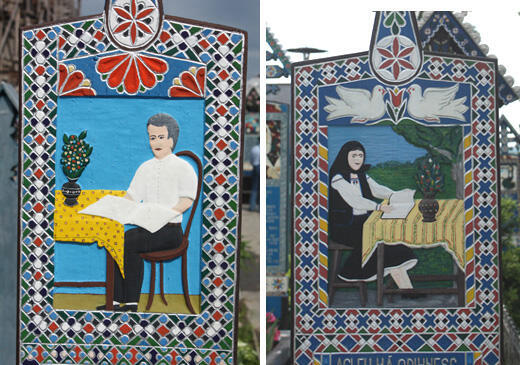 A man and a woman praying with their Bibles. 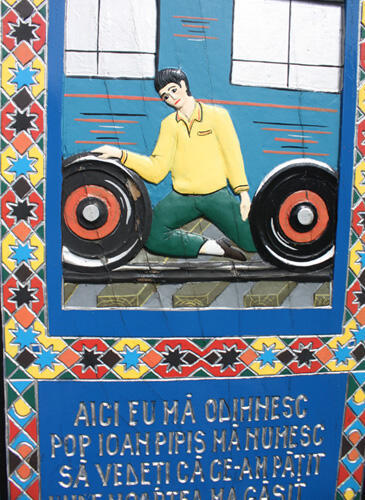