Fourteen indigenous Chilean detainees, from a people known as the Mapuche, have been on a hunger strike in the south of the country since July 12 to protest an "Antiterrorist law" which dates back to the era when former President Augusto Pinochet ran the country. ...

Mapuche protestor in confrontation with the police. Photo posted on flickr by antitezo.

Fourteen indigenous Chilean detainees, from a people known as the Mapuche, have been on a hunger strike in the south of the country since 12th July  to protest an "Antiterrorist law" which dates back to the era when former President Augusto Pinochet was in the seat of power in the landlocked country. Under this legislation, 31 people have been imprisoned in the towns of Concepcion, Angol, Temuco, and Valdivia. The law allows civilians to be tried in military tribunals using so-called "protected" witnesses whose identity and testimony are heard and recorded anonymously. This law was primarily applied during the 17 years of the Pinochet dictatorship, and the protesters say it has now been unfairly used against them. Human Rights Watch has launched an investigation which is heavily critical of the law. The Mapuche are calling for first of all the repeal of the law - but are also demanding better property rights, as well as the end of persecution that they claim is being perpetrated by authorities.

Juana Reiman, mother of José Huenuche, one of the hunger strikers in Concepción

My son was arrested 15 months ago under the Antiterrorist Law and still has not been charged. This is why they have decided to go on hunger strike. The law is unjust. Not only do we want to see the law retracted, we want to end the impunity with which the police act. They come to the towns looking for trouble and that is why my son is in prison even though he has done nothing wrong.

They have all lost a lot of weight and their faces are looking thin. We don’t have doctors though, so we don’t really know how serious their condition is. Yet the government and the courts say nothing. The press is also silent, as usual.

The situation of the Mapuche in the south where I live does not concern other Chileans. We are poor people; we don’t have access to the same kind of goods as they do, including computers to get our voice heard. Even the Mapuche who have gone to the city in the hope of improving their lives have turned their back on us and we feel very discriminated against.

Our struggle has been a long one, centuries and centuries. We want our land rights to be recognised. But firstly, we want the political prisoners to be released and the Antiterrorist law to be dropped." 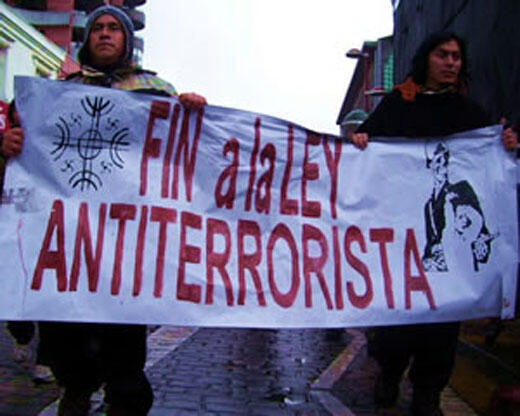 Photo posted on the Mapuche Nation website on 8 August.

Mapuches want to gain land rights in the south of the country where they held out against the Spanish conquistadores. Many have left their traditional heartland to try to earn a better living in the cities. Photo posted on flickr by antitezo.

'Pais Mapuche' poster. It reads: "Mapuche Political Prisoner on hunger strike since June 12" and at the bottom "no to the Antiterrorist Law - no more judicial set-ups. Immediate release of the kidnapped Weichafes (Mapuche) in Chilean state prisons!"